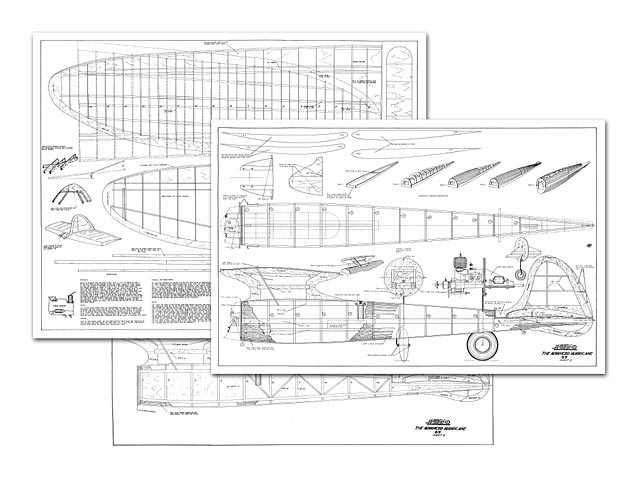 Quote: "Advanced Engineering Hurricane 69. The Hurricane was designed back in the late thirties to compete with the likes of the Goldberg Sailplane (oz1058), Don Foote's Westerner (oz11661), Cleveland's Playboy Senior (oz7835), et al. The original models that where flown in the San Joquin valley contests had all sorts of engines for power, from the old Browns to Elf 4's, and anything else that had a .60+ displacement.

The Hurricane, being somewhat smaller in wing area than the Sailplane, has a much greater performance in the climb pattern. The glide ratio between the two models was about the same, since the Hurricane was slightly lighter.

In 1944 the model was slightly modified in that the big round fuselage was done away with and the flat sided (pencil bomber) type was put to use. This change enhanced the climb rate even more, since the drag of the big round frontal area was eliminated. The wing and empenage surfaces remained the same. The model from that time on was known as the Herky.

About that time (1944) Arle Armstrong converged with Ray Snow and the competition models that were flown combined the Hornet .60 engines and the Herky as a combination. The added weight of the Hornet was slightly detrimental to the Herky's glide.

I flew the Herky powered with a Super Cyke from the spring of 1944 until the model was retired in 1948. The Herky was lost many times but somehow always found its way home. The longest flight was approximately 65 miles. Where it was launched from and where it was found. In those days we knew what a DT was, but just couldn't get them to work. I would recommend that one be used on this model.

We found an original kit and have faithfully duplicated everything, including the label. We also have included in the kit the fuselage drawings for the Herky, should you want to fly this model in Nostalgia ignition.

Quote: "I just purchased this kit a couple of weeks ago, mainly on impulse. After arrival, I looked at your site only to see you don't have this one. Only information I have is all here, so maybe you might scare up some more background from another source. The printwood scans will follow... Thank you for your site."

Quote: "I've since found some more information, and posted it on RCGroups, herewith:
Another RCGroups member posted I should check out Danny Sheeld's book, 'Antique and Old Timer Model Aircraft', available for purchase online.
"Looked up the SAM site, and found the Board of Directors page, with a number for Allen Heinrich. The phone call with Mr. Heinrich cleared up many things. It's a repro or re-issue from an earlier design, around '41 or so, by a company called 'Advanced'. Intent was to go up against the Goldberg Sailplane, as close as possible without being a copy. Somewhat smaller, a round fuselage cross-section instead of the oval Sailplane, a bit heavier unless you build the Pencil version. I was cautioned the ribs are not drawn in a straight taper, but are 'lumpy'. In other words, the ribs don't get smaller, for the taper of the wing, in an orderly way. This results in an uneven depth and covering, and by the time the ribs are evened up with a long sanding bar, spars and sheeting will not match the loft contours. It was suggested I take the root rib, tip rib and make my own, either on some kind of CAD or a stack of blanks, some carving and sanding, then go from there. He said it was designed to take the less-energetic .60 engines, such as the Super Cyclone or O&R's, while the Sailplane worked best with McCoy .60's. We talked about how I might want to start off with something a little less...imposing, like a Zipper or Ranger, and work my way up from there...he had some flight trimming suggestions, and gave me the straight dope on fuel mixtures and engine setups ."
I have a copy of Danny's book, and page 75 shows a copy of an advert, having only a reduced photo, short text and price. Apparently, A-J's Free Flight Service, based out of Fresno, California, who produced this kit, also made other free flight and control line kits.
So, there it is, that's all I know about it. By the way, my reference to "building the Pencil version" means a flat-sided fuselage, without the formers and stringers. For some reason, designs like that were referred to as 'pencil bombers'. According to the information leaflet included in the kitbox, the designer of the original airplane called it the "Herky" when built as the pencil version. Attempts to find that version resulted in the "Herky", your plans number 5549, which is a very different airplane.
Thank you for the Outerzone, I appreciate it greatly." 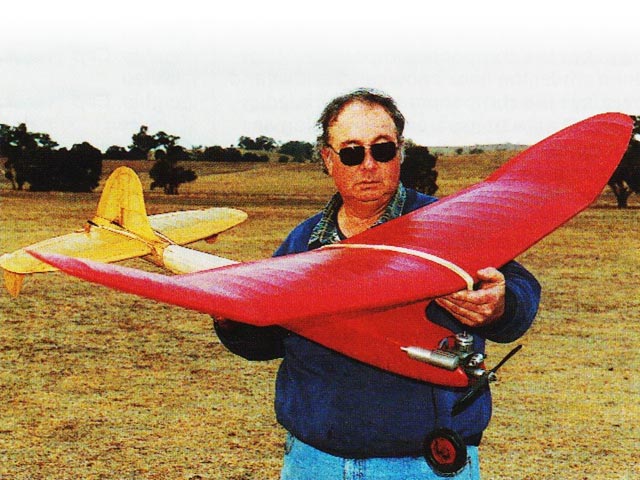