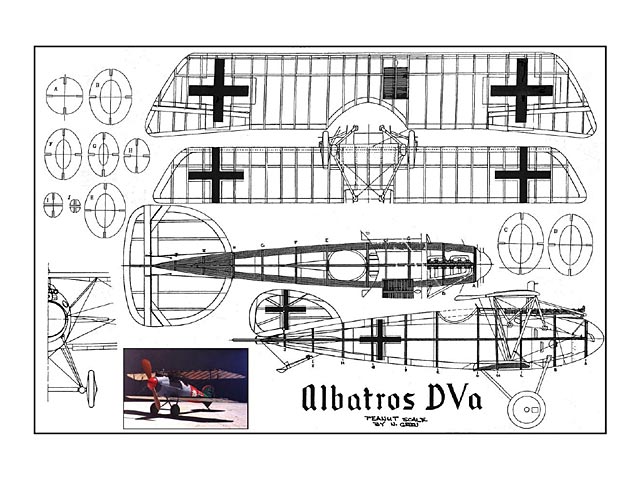 Quote: "While everyone is familiar with the aircraft of Anthony Fokker and their association with the Imperial German Air Service of World War One (Luftstreitkrafte), be assured there was another aircraft of equal renown, that being the fighter (and variants) produced by Albatros Flugzeugwerke. Every major ace pilot of the Central Powers operated the Albatros at one time or another. The subject of my model, an Albatros DV, is that flown by Paul Baumer, one of the “Greentails” of Jagdstaffel 5, Jagdgruppe 2. With his Edelweiss motif emblazoned on his aircraft, Baumer was the victor of 43 aerial dogfights and recipent of the Pour le Merite. He survived the war only to die in a flying accident in 1927.

My Albatros is peanut scale (13” wingspan) and while using traditional stick and tissue techniques and materials, somehow turned into a near-display model along the way. It was constructed in 1988 at a time when I was heavily involved with RC Scale models. I was determined to return to my roots, to build a subject that was rubber-powered and small. Fuselage is covered in 1/32” balsa sheet in keeping with the original’s monocoque plywood skin…sanded paper-thin. Wings were constructed by assembling the structure with rib blanks…then carefully sanding to airfoil shape with a sanding block. Wheels were turned on a Dremel Tool. Prop is of flying-type and fully functional…blades cut from a light gauge plastic food container. Rubber motor is installed. Overall finish is hand-painted, including lozenge pattern and insignia, using predominantly water-based paints. The Mercedes is non-functional (smile).

Although other slight differences existed, that most notable between the DV and the DVa was a small brace fitted to the outer wing V-strut and affixed to the lower wing’s leading edge…all in an effort to eliminate lower wing flutter and twisting. It succeeded. My model lacks the necessary brace to be a DVa and hence is a DV…as was the original aircraft flown by Baumer. Incidentally, Paul Baumer was a personal acquaintance of author Erich Maria Remarque who as a tribute to a fellow member of the “lost generation,” used the Ace’s name for his title character in All Quiet on The Western Front (1931)." 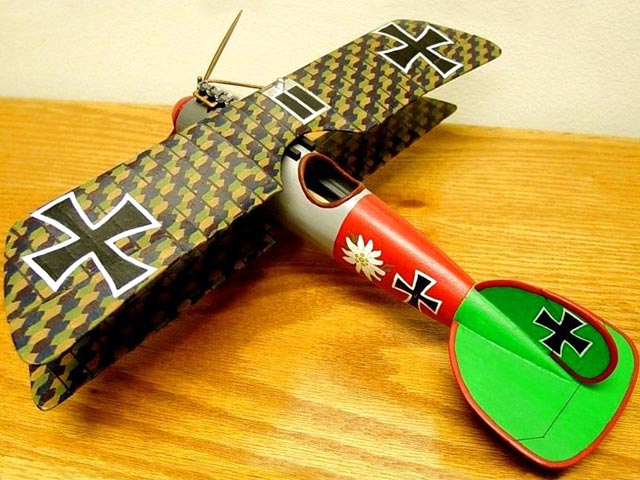 "Edelweiss, Edelweiss, Bless my homeland forever". Master of the homemade decal! it's the Edelweisse, the crosses, the printed hex tissue, then the rigging to keep it all together, engine, wheels... this is terrific workmanship across a range of media!
Miguel - 14/01/2021
Wait a second, I had missed this bit: "... Overall finish is hand-painted, including lozenge pattern and insignia ..."
And if the model was made in 1988, when were the pictures taken?
Miguel - 14/01/2021
Wow. Wow. Wow! A model to look up to. Also the precious tip on Erich Maria Remarque's "All Quiet on the Western Front". Thank you, Sir.
Atilano Suarez - 15/01/2021
Thank you for your kind comments, Miguel. Model photos were taken in my office about fifteen years after its construction, maybe 2002. It sits atop an oak bookcase. Made a nice conversation piece. Today it resides in a glassed-in display case.
Yes, the model was hand-painted. Lozenge pattern was printed in BnW on tissue (dot matrix) and then color painted with a small brush, etc. The process would be easier today, except that most inks are not color-fast. Just had to have that lozenge pattern...part of the
Thanks again, Miguel!
Neal
Neal Green - 15/01/2021
An honest pat in the back, even at a distance, never hurt anyone.
Miguel - 16/01/2021
Add a comment