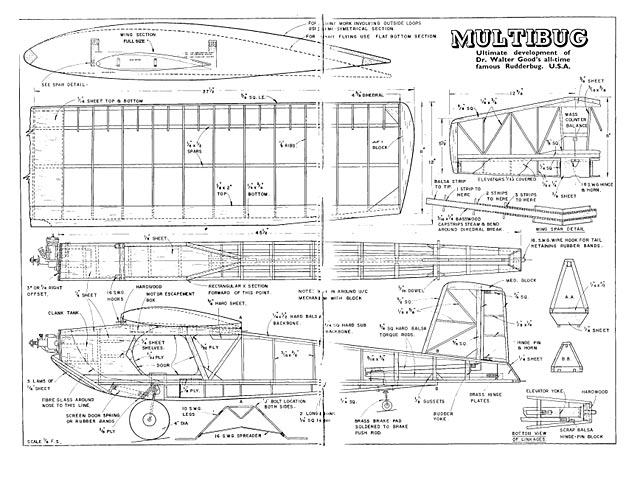 The Multibug was originally published in American Modeler, January 1959 (see article supplement). This here is the plan printed at 1/6 full size, as it appeared in in the Aeromodeller Annual, 1959.

The Multibug was designed especially for the dual proportional radio control system using the rudder and elevator. It is capable of a smooth precision pattern and also the full AMA stunt pattern. The original Multibug with over 100 hours of flying time, has placed in three National Meets and won first place at the Miami King Orange Meet in 1957. In addition to simultaneous proportional rudder and elevator, the plane features three-speed engine, steerable tail wheel and brake and a fail-safe system which neutralizes the controls on demand. A 'snap-backs landing gear allows landings on all types of surfaces. Many Multibugs and modi-fications have been built by the DC/RC members with good success so the design is well shaken down.

Patterned after the old Rudderbug (oz7009) the Multibug displays many of the same stable and tolerant characteristics. A dual ship requires a good control at all eleva-tor positions and flight speeds and must not be cantankerous near the stall. The Multibug seems to fill this bill. In fact the design is rather functional for this reason. As one 'friend' said - I don't like the looks of the plane but I sure like the way it flies.

A long tail moment and a 20% stab give stable longitudinal control. Smooth elevator control is obtained for normal flight, shallow 'buzz jobs,' straight down dives, inverted flight, and inside and outside loops.

For roll control the combination of the ample dihedral of 7° in each wing panel and a large movable rudder produce fairly rapid roll rates. Smooth precision turns as well as vertical pylon turns are easy and, with practice, slow rolls, which you'd swear used ailerons, are possible. The 7% fin and the body side area provide damping so that the turns are smooth without the jerkiness sometimes associated with the 'dutch roll' effect.

The triangular cross-section of the body aft of the wing is believed to allow good airflow around the rudder under all flight conditions.

The early Multibug employed the NACA 4412 wing section which is 12% thick with a flat bottom and fairly high lift. This selection would allow all the stunt maneuvers except good outside loops. Even with plenty of down elevatOr the wing would stall inverted on the back side of the outside loop. Single outsides were possible if you had over 500 feet of altitude, held only enough down to keep the wing from stalling and kept your courage all the way through the 'tuck under' part of the loop! The 4412 flew well inverted and was capable of very tight and safe maneuvers when right side up. Simply to do good outside loops the section was changed to a 1-1/2 x 4412. This was Hank Bourgeois' idea to take the upper surface of the 4412, cut all ver-tical dimensions in half and add to the bottom to give a semi-symmetrical airfoil with a two to one ratio of the upper to lower surface. This amount of asymmetry gives very good outside loops. The plans show both airfoils. Section I is the NACA 4412 flat bottom and Section II is the 1-1/2 x 4412 which is semi-symmetrical. For sport flying we recommend the flat-bottom Section I because of its high maneuverability. Section II is primarily for stunts involving outside loops.

The squared off trailing edges of the rudder and elevator always seem to bring on that look of 'boy, is he lazy!' Of course that is partly true, but the real reason is that in proportional, the control surfaces should be effective right down to small angles. We visualize a turbulent 'shadow' flowing behind the fixed rudder and stab. The control surfaces are immersed in the 'shadow' and do not become effective until they push out into the fresh air. Thus, a pointed trailing edge would be a 'dead' control until it had been moved through a large enough angle to emerge from the 'shadow.' We make the surfaces as hollow boxes so they are light and easy to build..." 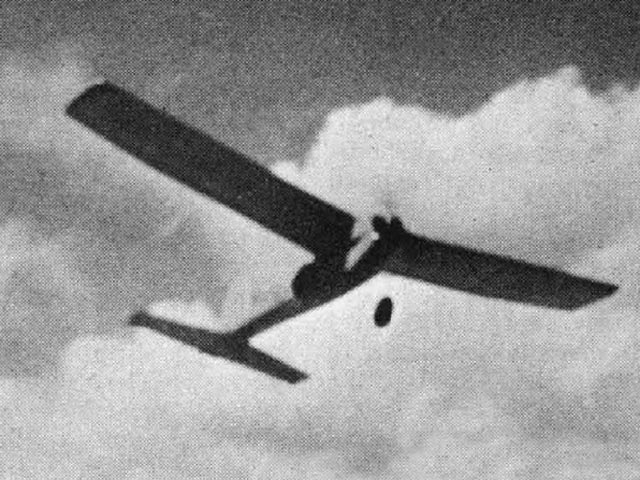