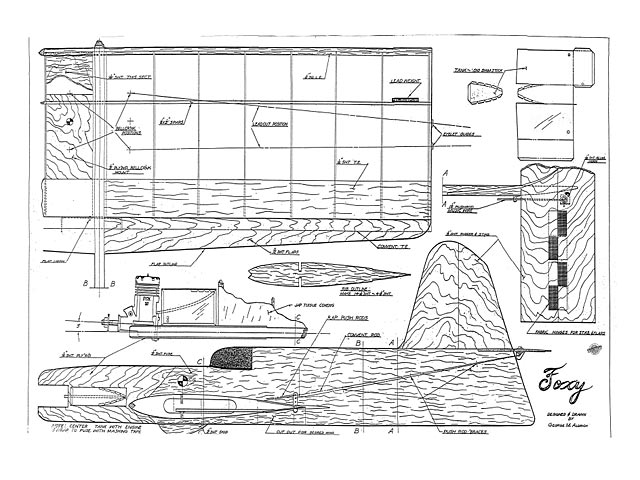 Quote: "Foxy, by George M Aldrich. Twice Nats Winner, once at the Internationals, the man says nobody is going to catch his hot combat job. A fact!

Combination of long tail moment, short nose and flaps - added after this picture was taken - gave astounding tightness of turn. On 60-foot, .014 lines, does 75-85 mph.

Foxy was designed to turn sharply, smoothly, and not slow down in maneuvers. Actually four models were built, the first three without flaps, and the last with them. From Mr Frank Zaic's year book you can see the results that I received. M. Zaic shows a lift curve for a NACA 23012 airfoil with and without flaps. With the flap at 0° the airfoil has a coefficient of lift of 1.0. If the flap is depressed 30° the coefficient of lift is then shown at 1.6 or .6 more than when no flap was used. This seems to me well worth the extra effort of adding flaps. The tightness of turn was so increased as to be astounding.

You will notice that the model has a rather long tail moment arm. Late in 1951 I started experimenting with various lengths of moment arms. Contrasting with the accepted opinion I found that the longer the moment arm (to a point) when coupled with specific nose moment arms, the more tightly and smoothly the model would turn. During these tests model performance ranged from loops that were large and wobbly, to a very tight, winding up type of maneuver.

One model in particular had a fuselage 38 in long and a wing of 550 sq in. Powered with .35 cu. in. engine and weighing 37 oz., it exploded on its twelfth flight while turning outside loops 10 ft in diameter at close to 80 mph. Failure did not result from weak construction, I might add. It can be reasoned that a model with a long tail moment and a short nose moment will have a greater moment of inertia around a given turning point. For example, suppose we take a see-saw, with two boys, one fat and one thin. To simulate a fuselage, let's set the balance point (center of gravity) off center. With the fat boy on the short end and the thin boy on the long end, we have balanced the see-saw ( fuselage). Now, if we were to put another thin boy on the long end it would drop. The degree of speed with which he would drop would depend on how the moment arms are arranged. By now I'm sure you can see that placing another boy on the see-saw produces the same effect as applying a force to the tail surfaces, or moving the elevator. Sharpness of turn is then achieved best by shortening the nose moment and lengthening the tail moment using a constant CG. While moving the CG rearward produces quicker response to control, it also causes unstable flight.

To achieve perfect turning qualities, it seems only natural that you should do so with a constant CG and the juggling of moment arms. Practical experience will tell you just how much. I haven't yet found an accurate method of determining this by mathematics, since there is such an enormous change of direction with stunt models that your figures vary too much to give accuracy.

Having flown combat no more than 15 times, I can set myself up as no combat flyer. However, I do know that Foxy has excellent qualities for both a stunt trainer or combat model. Construction is very simple and fast. The plans are very clear. With the wing balanced in the center, add weight to the outer tip until it drops without hesitation, but does not fall very fast.

The fuselage is of 1/2 in medium hard sheet 4 in wide. Cement and clamp the 1/16 plywood sheet after cutting to shape and allow to dry. With the tail surfaces cut and sanded from 1/8 straight grain medium sheet, add the hinges and control horn and cement to fuselage. The wing is now cemented in place and the removed portion replaced. Carefully install the controls; they make the difference between a good and bad flyer.

Sand the entire model well and apply a coat of clear dope. Sand again lightly. I covered the models with Jap tissue as it is very light and strong. Cover dry and sprinkle with water. Three or four coats of clear dope are sufficient. Add one or two coats of colored dope and the model is complete. If you do not use hot fueiproof dope such as Aero Gloss, Sta, etc., apply a thin coat of fuel-proofer, ie Tuff, Seal Sure, etc adding a heavy coat to the motor mount area.

The tank is cut and soldered from .010 shim stock. Use 1/8 in. large ID tubing. An important point is to turn both vents directly into the wind. This gives constant pressure for a smooth motor run. 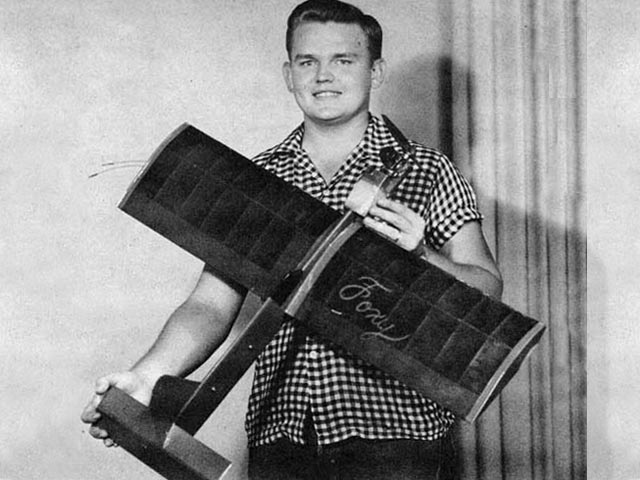