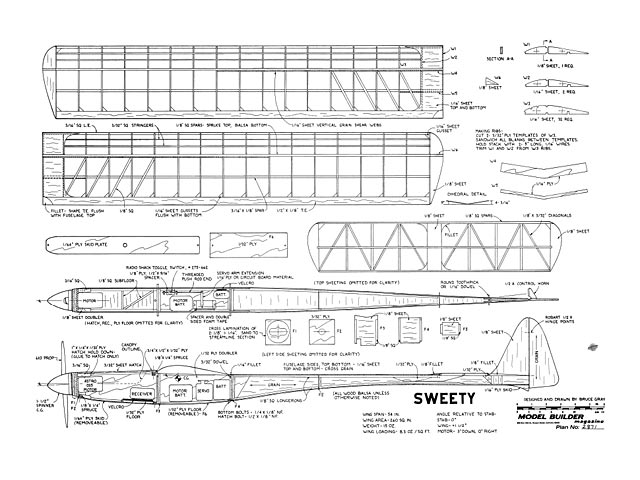 Quote: "Sweety, by Bruce Gray. A sweet-flying, inexpensive single-channel electric sailplane that is guaranteed to put some fun back into your flying without taking much from your wallet Power is an Astro 035 electric motor.

More and more people are becoming interested in electric-powered flight because of its numerous advantages. Electrics are quiet, clean, simple, and very adaptable. Electric planes can do just about anything. They can fly 100 miles per hour, climb 2,000 feet in 60 seconds, or fly slowly for about half an hour inside buildings.

Many people want an electric-powered, radio-controlled plane that is inexpensive, easy to build, rugged, and slow and docile in flight. Such a plane isn't easy to find. You may look at the prebuilt models, but they cost $100 without the radio control, and they tend to be overweight. Or you may try modifying a gas-powered, R/C model, but they tend to be heavy too, so performance suffers. Even some purposefully built electric-powered 'trainers' have wing loadings of a pound per square foot, that produces a flight faster than many would like.

Sweety uses an inexpensive power system and about $25 worth of materials for the airframe and covering. The plane is easily built and can take less than graceful landings without damage. And with a wing loading of about eight-and-a-half ounces per square foot, flight speed is about 15 miles per hour. Additionally, Sweety flies herself without control input. If you like relaxing flying, this is it. Sweety uses the Astro Flight 035 motor and a free flight battery pack. The plane is designed to accept both the 020 and 035 motors and flies well with either. I understand, however, that the 020 motor is being discontinued. Flight speed is slower with the 020 system, but the climb is better with the 035. Since the 035 system is quite a bit more powerful and weighs only a few ounces more, I recommend it.

For those of you who like to experiment, Sweety can carry different flight battery packs. The standard freeflight pack is 275mAh which gives about two minutes of power. The 550mAhr pack produces flights of about five minutes. If you want really long flights, don't be shy about flying with less than the recommended number of cells.

As with any small electric-powered plane, lightweight radio gear is needed. If you have some, you're set. If not, and if you're on a really tight budget, you can get a single-channel pulse proportional system for about $20. Going this route you lose the option of having motor on/off control. If you plan to build more complicated models, I would recommend a four-channel mini-system. Suitable equipment is available from Ace, Cannon, Futaba, World Engines, and Tower Hobbies. The total weight for the radio equipment should be about two-and-a-half to three ounces.

This plane has a narrow fuselage; a mini-system is a must.

CONSTRUCTION: This model may seem complicated at first glance, but it is really quite simple. If you take one piece at a time you won't be overwhelmed. It took me about 40 hours to build the model from scratch, and I am very slow and meticulous. Only basic modeling tools are required; no drill press, jigsaw, or other expensive tools. Although not necessary, one real timesaver is the power Dremel tool.

With a model of this size, much weight can be saved by choosing adhesives and wood properly. You will need several adhesives. Almost all the model can be built with a small bottle of cyanoacrylate adhesive. Get a gap-filling formula. Be careful with this stuff since it is an extremely powerful bonder. It sticks your fingers to things just as permanently as it does wood.

Selecting wood is like selecting wine, it depends upon the situation and your preference. Balsa is amazingly variable both in density (418 ozift.3) and type of cut, so visit your local hobby or lumber store that stocks balsa and test the wood by hand. The wood should be straight, with fairly uniform density and have only minor blemishes. Select medium-light wood for the fuselage nose, top and bottom sheeting, wing center sheeting and tips, and stabilizer center sheeting and tips. Pick medium-hard for fuselage sides, and wing spars (make sure these pieces are matched for left and right sides). All other wood can be medium density.

TAIL SURFACES The rudder and fin are as simple as they get. Cut out the two pieces, making sure you include the one-inch wide tab on the fin that extends down into the fuselage. The stabilizer is easily built by placing the parts over the plans. The plans should be covered with wax paper to protect them. Pin down the three spars, selecting the dense spar for the center. Cut the center sheets from a one-inch wide strip, and glue them in place..." 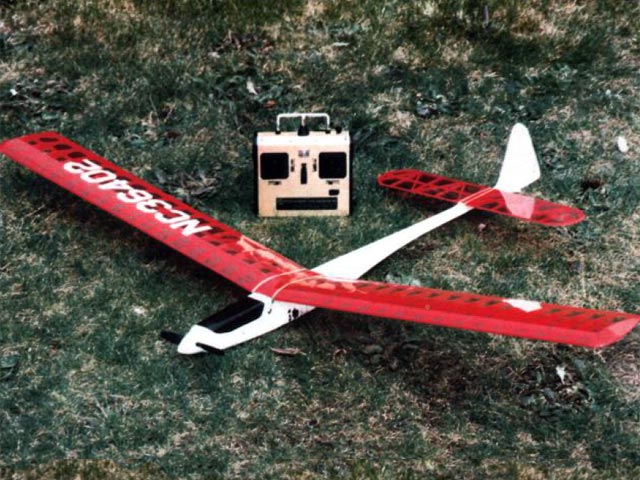