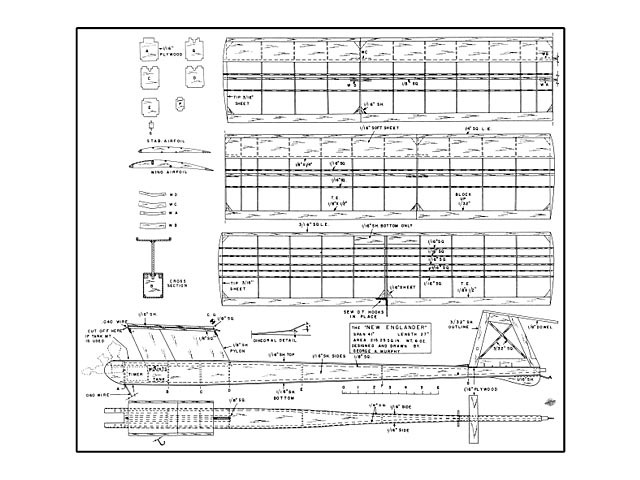 THE New Englander is not a new design made to keep pace with each set of rule changes. It has evolved through many rule changes to a straight contest model, easily built and flown by anyone with the barest knowledge of model building. Over the past few years, many sizes have been built by the expert as well as the novice builder. It is a functional, easy to build model, with the ability to hold a minimum of adjustments over a long period. If built according to the plans, your New Englander will fly right off the board. The amount of additional performance will depend on your willingness to tinker. The ruggedness of the design can best be shown by one model that has survived six contest seasons and is ready for another one. So, if you are looking for a good, reliable contest model, this is a design that will more than fill the bill, as well as put you in the winner's circle.

The 'Coke Bottle' fuselage, though not new, has been overlooked for the most part in the field of free-flight. It has the ability of increased air speed without blanking out the effect of the tail group, as is the case with a tapered box fuselage. This, coupled with the NACA 6409 wing section, gives fast acceleration and when the power quits, one has the feeling that someone has put on the brakes. An advantage not too often realized with the 6409 section, is that weight of finished model need be of little concern. The finished model should weigh about 6 oz., but New Englanders have been built as heavy as 101/2 oz., with very little if any loss in flight duration.

Fuselage construction: Cut both sides at the same time, stacking one sheet of stock on top of the other. Cement a 1/8 sq strip on the top and bottom edges, on the inside of each side. Install the hardwood engine mounts, firewall and bulkheads back to the rear of the pylon. If the DT (dethermalizer) skid is used, install it at this time, using soft wire to bind it to the back of the firewall. Slide the pylon into place and cement the 1/8 sq braces on each side, at the fuselage joint. Allow this to dry, then cement the tail block into place. Cement the remainder of the bulkheads into place, squaring up the fuselage as you go along. Rough cut the top and bottom sheets to outline. Cement the fuel tank in place, and then the top and bottom sheets. Install the plywood stab rest. Cement a piece of 1/8 sq strip to each side of the pylon at the top edge, to provide a wider cement area for the wing rest. See the cross-section sketch for the shape of this strip.

Assemble the wing rest, with its runners, and cement in place. Make a small triangle from scrap balsa to check the alignment of the wing rest with the pylon. Add the sub-rudder, and sew the D.T. and wing hooks into position. Apply an extra coat of cement to all wire parts. Allow this to dry and sand smooth, rounding off the corners of the fuselage when sanding. If you plan to use a tank mount, cut the nose off at the indicated line in the side view. The use of the tank mount is not recommended because of a change in the thrust line. This can produce a steeper right turn at the moment of release.

Rudder and stabilizer: Construction is standard and should not present any problems. The stock should be medium-hard with long grain. Tip ribs should be very soft sheet. Cement all joints at least once more after removal from the plans. The tips are sanded round, as are the leading and trailing edges of the rudder. A 1/2 dia. dowel V.T.O. (vertical takeoff) peg can be cemented to the top of the rudder while it is still on the plans. Shape the leading and trailing edges of the stabilizer as shown in the airfoil sketch.

Wing construction: Wing construction is only slightly different from standard. Be sure the spars are hard stock. The bottom spar is added after the wing is removed from the plans. Note that the center ribs are double. Plywood may be used in place of balsa for the dihedral braces. The leading edge sheeting should be very soft stock, but be sure to apply at least one coat of clear dope to the bottom of this sheeting before covering. To receive the full benefit of the 6409 section, the front edge of the trailing edge should be raised 1/32 off the plans during construction. Wing tips are rounded the same as the stabilizer. A strip of silk 1 inch wide should be cemented over each dihedral joint after the wing is completed and before covering. These joints can open up in a hard landing..." 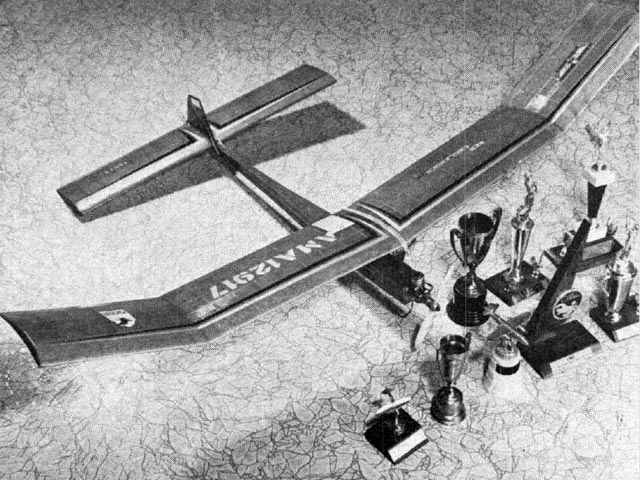