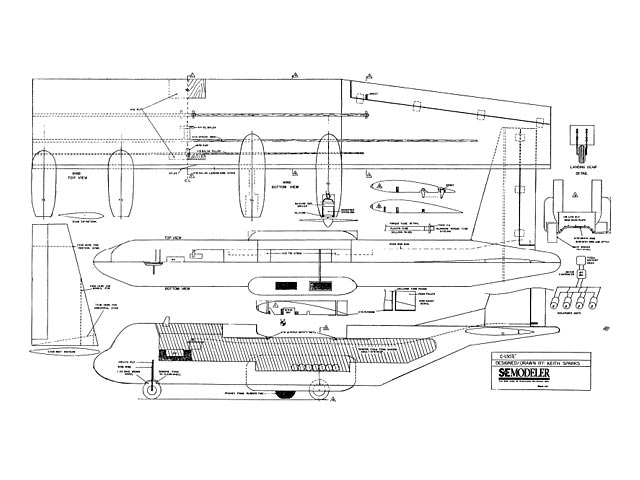 This project really started when I built a Multiplex Twin Star to learn about multi-motor electric flight. The Twin Star is a high wing, twin engine, foam airplane with plenty of power and very forgiving handling characteristics. Importantly, it provided me with lots of fun and many lessons-learned.

I used those lessons to design and build my C-130E. It has a good power to weight ratio, flying well even at 1/2 power. It is as forgiving as the Twin Star. But this electric Hercules is not as aerobatic because of its wing span. However, it will loop, and slow fly-bys and touch-and-goes are very impressive too.

Construction: The construction method I describe might seem unusual, but it produces a semi-scale, lightweight, low-cost aircraft.

Fuselage: I began by transferring the pattern of the fuselage from the plans and the inner cavity to a 2-inch sheet of white expanded foam board. I used a scroll saw with a fine tooth blade to cut the left and right halves of the fuselage.

To remove the foam from the center section of the fuselage halves, I used a 1-inch diameter, 100-grit, drum sander in a drill press. By adjusting the height of the drill press table, I was able to set the amount of material the sander removed. Two passes were required to achieve a fuselage wall thickness of 3/4-inch. Take care around the areas where the lite ply wing-attach-plates go. A mismatch here causes problems with the bond later.

I temporarily taped the fuselage halves together to sand-out any irregularities: 120-grit sandpaper worked well. Next, I marked the locations for the landing gear plates. I used a Dremel and router bit to cut the groove.

Make the radio hatch from a piece of foam scrap. A tight fit is required to prevent the hatch from blowing off during flight. Use 120-grit sandpaper on a sanding bar to 'true up' the top and bottom of the fuselage. I sanded the taper into the nose and tail as per the plans, viewed from the top. Sand-off the upper corners of the fuselage next. Do not skimp here or your 'Herc' will look boxy. I used photos and drawings to determine the Herc's nose shape: 180-grit sandpaper, worked slowly, got the shape right.

Before adding the wheel well fairings to the fuselage, cut them out with a hot wire and shape them. Make the contour by wrapping 180-grit sandpaper around the fuselage and using it like a sanding block to shape the inner surface.

Bond the fairings to the fuselage and then use a Dremel tool to clear the holes for the landing gear. Several test fits of the landing gear and their wheels were done before I epoxied them in place. Note: Flip the fuselage over before the epoxy cures and lay a straight edge on the wing saddle to make sure it is level. Adjust as needed.

I used 280-grit to 'smooth up' the fuselage. I epoxied a piece of sheet plastic disguised as a VHF antenna into a slot cut in the top of the radio hatch. It acts as a handle, too. Then I installed the wing attachment plates..." 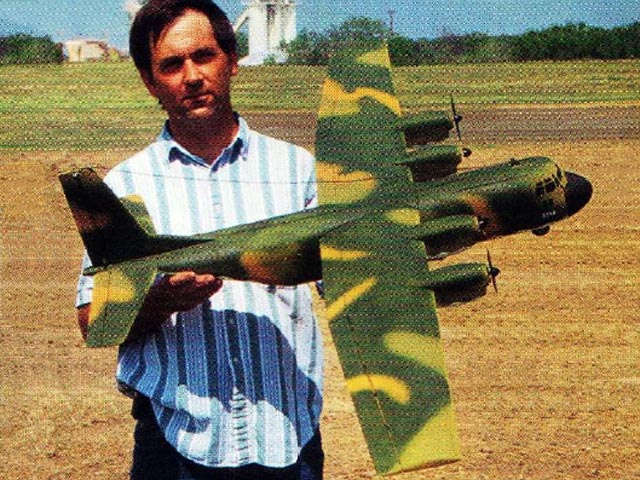