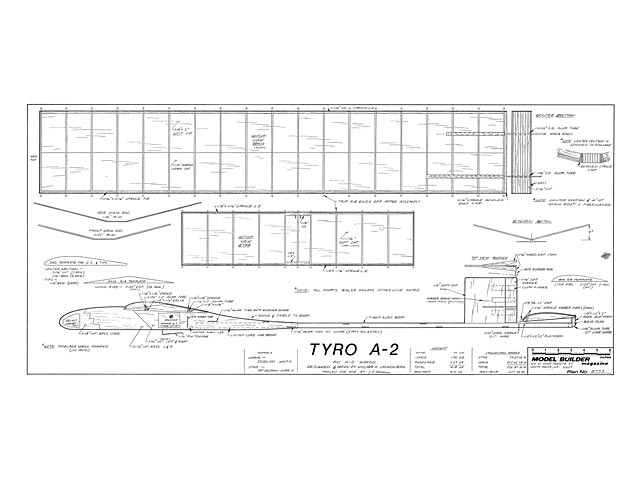 Quote: "Designed for the author's 15 year old son, this all sheet balsa A/2 Nordic is just the thing for anyone of any age who would like to enter the scientific world of free flight.

The TYRO is aptly named. It is intended to be a Nordic glider for the flyer, of any age, who is new to the event. More specifically, it was designed for my son Robert, age 15, when he outgrew junior competition and moved up to the senior class. Tiring of the A/1 glider he had been flying, and perhaps too flushed with success, he desired to move up to the 'big time' A/2 leage, and requested a new model design to build, and fly.

The first time the TYRO appeared at a contest, one of Robert's competitors sidled up to me and queried sarcastically, 'What is that boxy looking thing? It looks like an overgrown A/1.'

He was right on both charges. But he was premature with his disparagement, for at the end of the contest, he trailed far behind Robert in the standings. A fluke? Not really. That result has since been repeated several times.

As a long time Nordic flyer and former FAI team member myself, it has been my contention for many years that a consistent winner in this event need not have a complicated, difficult-to-build, or even streamlined model. In my judgment, the criteria for repeated success are (1) a consistent, durable, all-weather model, stable on the tow and in the glide, and (2) a dedicated flyer with the experience and ability to sense rising air and the tenacity to tow and release his model into it consistently.

The TYRO was designed with this belief in mind. Accordingly, among the design objectives were simplicity of design and construction, durability, and consistency. The first two ruled out curved wing and stab planforms and built up construction, and they dictated the use of a fiberglas rod tail-boom. Ample V-dihedral instead of polyhedral was used to eliminate two wing joints. The wire wing joiners were employed to minimize folded wings on tow, a relatively common problem among inexperienced flyers in towline events. A clockwork DT timer was utilized instead of a fuse, because of local fire hazard regulations, but a simple fuse dethermalizer would be equally satisfactory. No gadgets of any kind were used. Durability was fostered by the fiberglas rod tail-boom, plus spruce leading and trailing edge reinforcements. Consistency was enhanced by the forward center of gravity (CG) location, with positive wing incidence and ample dihedral, and stable towing characteristics. With this background, let's get on with construction.

STAB: Begin construction with the stabilizer, since it is similar to the wing, but easier to build. Select a piece of 1/16 x 3 x 36 inch very light, warp-free balsa. Cut off a piece 18 inches long, then glue another 1/16 x 7/8 x 18 inch section to it. Finally, glue the 1/16 x 1/8 spruce leading and trailing edges to the balsa. Sand this resulting 1/16 x 4-1/8 x 18 inch sheet smooth on both sides, and apply one coat of dope to the underside. Set this aside to dry. Next, cut out the 1/16 bass rib template and sand to shape as shown on the plan. Using this template, cut out 11 stab ribs from 3/32 soft sheet balsa, pin them together and sand them to shape.

Note that the ribs are longer than the stab chord. This is done for a reason. Pin the ribs to the plan through the overhang at each end. Next, carefully glue the 1/16 x 4-1/8 x 18 stab surface, doped side down, to the ribs. Be sure to pin it carefully to the ribs so that the true airfoil shape is obtained. When dry, remove the stab from the building board add the DT rubber band hooks, DT string wire, and center reinforcing members under the leading and trailing edges. Cut off the excess leading and trailing edges of the ribs and sand the entire stab to shape..." 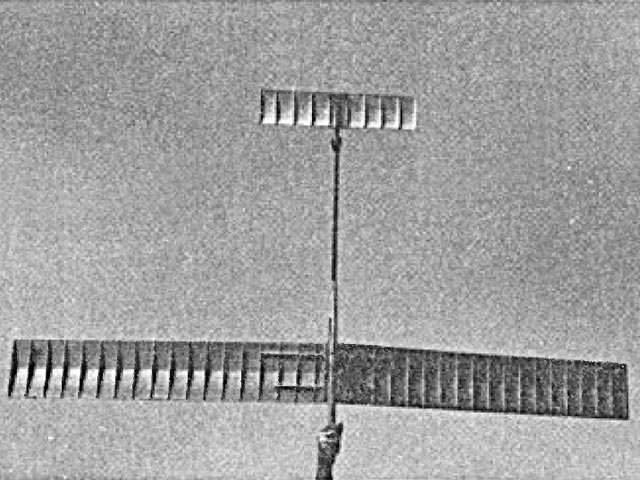