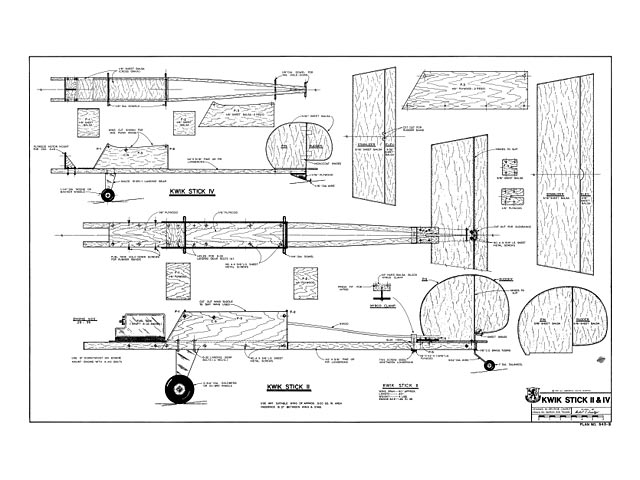 Note this plan shows parts for two models at two different sizes: Kwik-Stik II is 50 in span for .35 power, and Kwik-Stik IV is smaller for Cox Golden Bee engine.

Note this plan shows only the fuselage and tail, a wing needs to be sourced from elsewhere.

Quote (from Kwik Stik I article text): "If you follow the plans, this fuselage will come out perfectly straight without the use of a jig of any kind, and will fly right off the board, so to speak. On the very first flight the only trim change made whatsoever was just about 1/16 of up on the transmitter elevator trim lever.

This article concerns itself only with the largest Kwilk-Stick built, however. three smaller ones have been built: Number II used an OS Max .35 and a Sr Box Fly wing; Number III used an OS Max .15 and Jr Box Fly wing; and Number IV, the Mini-Stik, used a Cox Golden Bee and an Ace foam wing, as used in the Upstart kit. Numbers II and III used rudder, elevator and throttle while the .049 ship used rudder and elevator only. The latter, with two servos and four channel receiver, 500 MAH battery pack, only weighed 18-1/4 ounces, ready to fly!

The largest and smallest ships use no down or side engine thrust, however, the .15 and .35 size ships required about 3/16 of washers under the rear engine mounting bolts to provide some down thrust. I think this is due to the use of the Box Fly wings, being flat bottom they evidently provide more lift, thus the need for some down thrust..."

Quote: "Here is the companion to the Kwik Stick I & III plan from the November 1973 RCM. The first sheet was shown in the magazine and included the Kwik Stick I & III. The II & IV were not shown in the magazine and until now, I had never seen a copy of these sizes.
The plan that was scanned was quite dark and this file is large. I am hoping that someone can clean this one up, and that this can be an addition to your great site. Thanks for all your efforts," 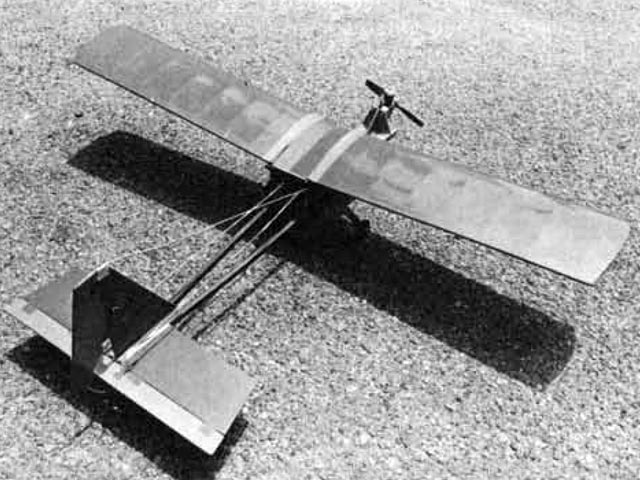 Interesting the actual printed name in the title block of the plan seems to be a typo and 'Charot' should be 'Chabot'. Certainly the first of the two plans and articles (oz6158) was credited to Mr Chabot.
SteveWMD - 06/01/2021
Add a comment