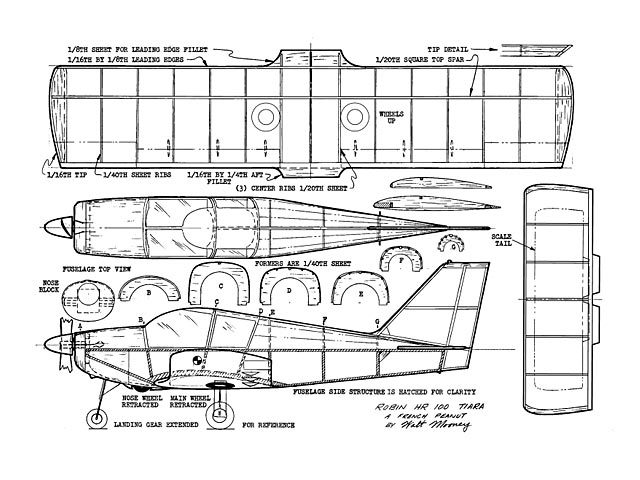 Quote: "Our Premier Peanut Potentate selected another French design for this month's model. Taking advantage of the optional hand launch, the Robin has put in 40 second indoor flights.

When I finally received my copy of 'The Observers Book of Aircraft,' by William Green and Dennis Punnett, 1974 edition, I immediately thumbed through it to see if there were any three-views that would make up into a nice Peanut Scale model. The French Concern, Pierre Robin, has just brought out a new model called the HR.100 Tiara. The Tiara name comes from the fact that this aircraft is powered by a 320 hp Continental Tiara engine. The three-view showed that the Tiara would make up into a very nice Peanut. It has plenty of dihedral, a fairly low aspect ratio wing, and a good sized vertical tail. The horizontal tail might be large enough, but I enlarged it about 20% dimensionally, just to be on the safe side.

Because I got my copy so late, December 20th 1974, I had to put in a rush building job to get a model of the Tiara ready for the Vegas Vultures New Year's Peanut Scale contest. I built my model with its landing gear retracted, for two reasons; the good looking flight simplicity, and because Bill Warner always insists that we stick with the Peanut Hand Launched rules. I prefer ROG, but I figured I'd put myself into Warner's shoes by having a model that wouldn't take off.

The model justified my efforts and did 40 seconds, officially, under a 25 foot ceiling, to take second place. (I further claim that they had to go fly outside in order to get better flights ... I'd already used up my attempts.) Actually I got beat fair and square, considering it's a fun contest and Vegas is a gambling town, and my six-shooter was at home.

This model is really a very simple airplane to build and won't require too much in the way of instructions. Being a modern airplane, it does not have a lot of external details (like a bipe), and therefore it is important to add what details are readily apparent.

The horizontal and vertical tails are simply built over the plan, using 1/20th sheet, the tips are firm 1/16th sheet, and all the other ribs are 1/40th sheet (DON'T GET SHOOK!! At the end of this article we are going to tell you where you can gel special Peanut Scale wood in these dimensions). The fillets at the front and the trailing edge of the center section of the wing are solid wood.

The fuselage uses 1/20th sq for its basic box structure and 1/40th sheet for its formers aft of the nose. Note that the prop shaft is above the upper cross brace locations. The technique I used to build the fuselage was to put in the upper cross braces slightly forward of the former positions. Then, when the complete fuselage structure, including upper stringers, nose cowl sheeting, side fill-ins and bottom block were in place, I knocked all the upper cross pieces out of the structure, leaving plenty of room for the rubber motor. (That should be rubber engine? right, only the electric powered planes have motors.) (Why change after all these years!?)

The nose block is made up of two parts; a 1/4 thick nose and a 1/8 thick plug, made to fit in the nose of the model. Note that both front cross pieces are cut away so the plug can be inserted in the nose.

Cover the model with your favorite tissue and technique. This has been covered, forgive the pun, so many times in Model Builder that we'll leave covering unexplained here.

The aft canopy is a simple flat-wrapped sheet of thin clear plastic. The forward one must be formed either by stretching hot over a mold, or by doing the same thing with a Vacu-Form. The canopy on the model in the photos was made on a toy Mattel Vacu-Form. It is about as big as you can possibly do and took me three tries to get a good one.

Decoration and details come last. I used red and blue tissue for the stripes, black tissue for the numbers, (letters) and top of the cowl, and the simulated retracted main wheels. The nose wheel, fairings, flap hinges and carburetor inlet, and tail bumper are scrap balsa.

For a source of Peanut Scale wood for this model send a self-addressed stamped envelope to: Mike Taibi, 4339 Conquista Ave., Lakewood, CA 90713 for his price list.

Peanuts can be built lighter with specially cut wood and a light Peanut flies better and lasts longer.

The model in the photos flew best in left circles. The wings had 1/8 inch of washout and the trailing edge of the rudder was warped slightly for a left turn. Power was one loop of 1/8 rubber, 10 inch long."

Quote: "Robin HR.100 Tiara; Peanut scale plan by Walt Mooney from the April, 1975 issue of Model Builder. The horizontal tail has been completely re-drawn and adjustments have been made to the length and leading edge of the main rib. Jan Novick."