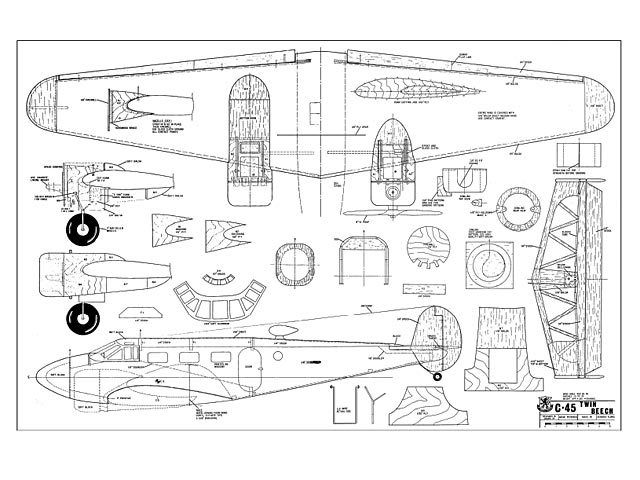 Quote: "For years, I have admired this bird. To me, it is actually ugly on the ground with its round monster-like forms sticking out in front and those rudders hanging on the end of a big flat elevator. In the air, however, these ugly lines seem to transfer into a graceful form of beauty with dynamic symmetry, the oversized front area acting like the commander continuing gracefully back with its swept wings to the unmistakable guidance of the twin rudders - so as it should be - this one is meant for flying. It flew for the first time way back in 1937 and is the oldest design still current. During World War II, 5,204 were delivered to the armed forces for all kinds of service. The US Navy version RC45J is still in service today usually covering light transport duty. If aircraft designs had a Hall of Fame the C45 certainly belongs up front.

After discussing my desire to build the Beechcraft with my friend, Capt. Jan Sakert, he whetted my appetite by sending me a set of photos from Kaneohe Bay, Hawaii. These pictures solved my paint scheme in a hurry. First, it is military (love those stars and stripes). Second, it is white and red (my favorite colors). Who but the Marines would paint a military aircraft so attractively?

I needed one more kick in the pants to get started, and that came about when Andy Williams came to town for a show. It was early in the morning and I was sipping coffee in my backyard. Here came Andy in his brand new Model 18 at about 700 feet and right over my head. Five minutes later another and another and another - his whole darn show had Beech 18's and they provided the impetus to send me to the workshop that very morning.

Can I build and fly this model, you say to yourself? After all, it's a twin. Yes, you CAN! It is just a box fuselage and foam wing with a few frills on it, and if you can perform touch and go's with a feeling of security you should have no trouble with the Beechcraft. I say this because you are sure to encounter single engine landings and a mistake here could mean disaster.

The little ship was designed for the new 10 ounce mini rig and I do not recommend the heavier control systems because of the heavier wing loadings. I am using only three servos in mine - elevator, motor and coupled aileron and rudder. The total flying weight is four pounds. It is all you need for complete control so why add more?

Let's start constrution with the fuselage. Cut the 1/8 sides and front doubler from a good grade of soft balsa..." 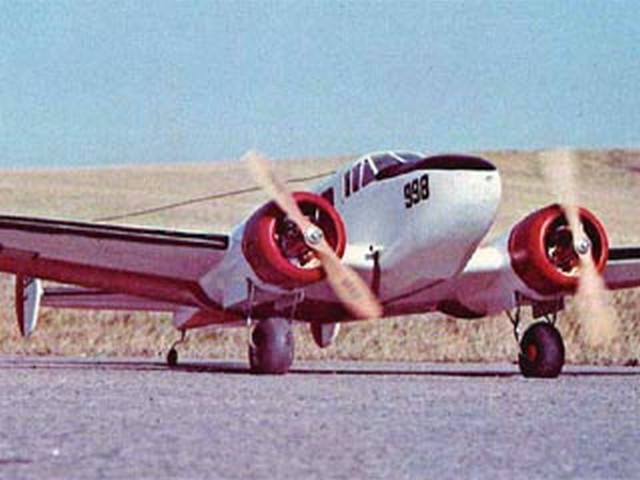