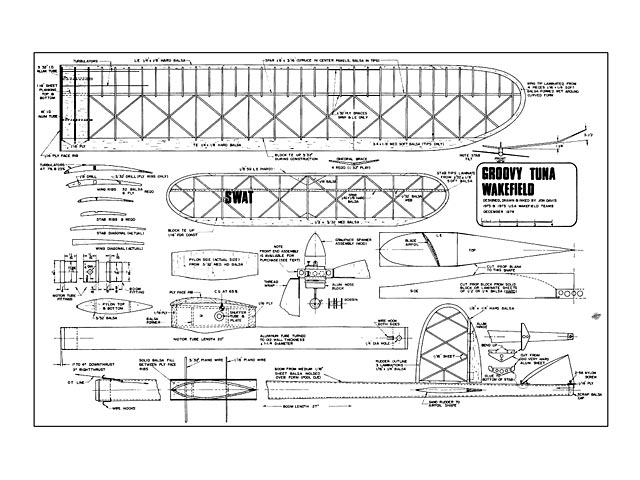 Quote: "Twice FAI Wakefield team member (1973, 1975), presents his winning design. If you're serious about the event, try this one.

Groovy Tuna was designed for the 1973 World Champs in Wiener Neustadt, Austria. The objective was to produce a model capable of performing well, both in the light early-morning lift, plus the stronger afternoon turbulence. Groovy Tuna meets both these requirements relatively well, but there is a bit of sacrificing which had to take place to come up with an all around model. Groovy Tuna is happiest flying in light air. If you want nothing more than a thermal-pig, then build a stock Maxine (MAN, 1970). The Maxine is as tough as an old boot. Fortunately it flies much better than an old boot.

For those of you who are wondering where the name Groovy Tuna originated, I suppose some explanation is in order. Thomas Koster, of Denmark, built a power ship called 'Hot Tuna.' Who could leave a name like that alone? (By the way, Hot Tuna is also a San Francisco rock band.) Well, one night I went in to have supper, and there before me sat a spinach and tuna casserole which the cook had named 'Groovy Tuna.' I couldn't resist using the name. I was even going to hang some of the spinach from the trailing edge for effect, but I soon scrapped the idea. What a great psychological effect it would have on the competition to have your model come flying out of a giant casserole bowl with tuna and spinach hanging from it! Er, uh - oh well, not such a good idea.

DESIGN: The design of Groovy Tuna (the air-plane, not the casserole) is pretty straight-forward in most respects. Compared to the Maxine, the wing was stretched a bit, the stab size was reduced, the rudder area decreased, and the moment lengthened. Groovy Tuna uses an airfoil which is a copy of John Gard's Unlimited-Rubber model. The prop is a Schwartzbach with no changes.

Groovy Tuna climbs up fast and its redeeming feature is the glide. Here in Albuquerque, in early morning air, the model will do just over three minutes (3:05 to 3:10). In the early morning air at Taft, it would do right at four minutes. There were some models doing more than this - most notably John Gard's model - but they were not competitive in the afternoon thermals.

For those of you of an experimental nature, the Groovy Tuna has flown with a stab size of only 33 square inches. The normal size is 44 square inches, and this is considered small. The smaller stab would let one put a few more inches in the wing, but it should only be flown in extremely dead air. It simply can't handle the turbulence with such a small stab. Forty square inches appears to be the lower limit for an all around, stable Wakefield.

BUILDING: The Groovy Tuna is not a beginner's model. If you want a simple, easy-to-build and fly model, then build a Maxine. The wing of Groovy Tuna is simple, and the internal spar, though somewhat of a pain, is strong. The easiest way to cut out the opening in each rib for the spar is to use an aluminum template with a small hole (.030 diameter) drilled at each corner of the spar rectangle. When the rib is cut, simply poke a pin through each of the four holes and then use a small knife-blade to connect the holes. Presto (or is it zap?), and the hole for the spar is cut. The three inner ribs on each wing are 1/16 ply, with holes drilled for the aluminum tubing. The wing tips are laminated..." 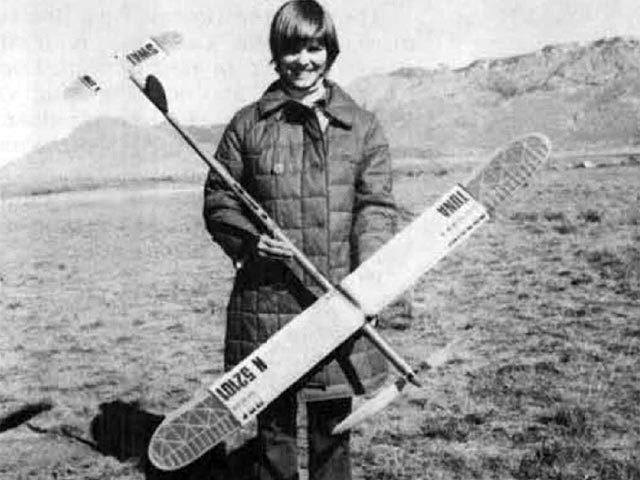