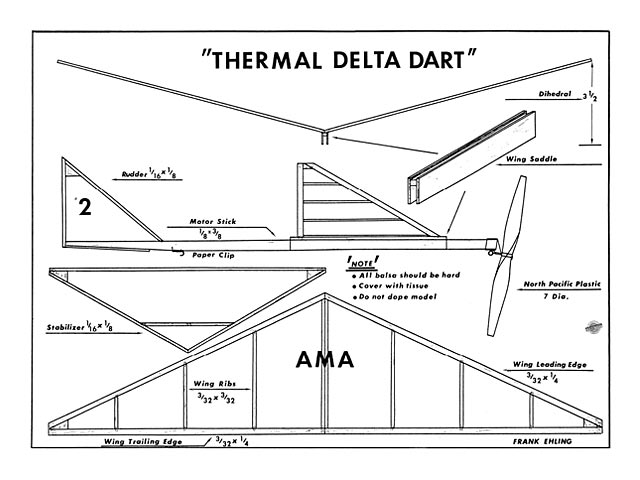 Although this model is easy to construct, building a Delta Dart (oz7931) or AMA Cub first will aid in making a better Thermal Dart. It uses a larger propeller and a stronger rubber motor than the Delta Dart, thus enabling it to climb higher, and has a larger wing, which allows it to glide longer. By gluing the wing to the wing saddle, the wing can slide along the motor stick, making it possible to adjust the model to obtain good glides without stalling after the rubber is unwound. A little practice flying will indicate the best wing location for a smooth glide.

Begin construction by laying Saran Wrap over the entire full-size plan; over this, place the tissue covering. Hold both layers in place with small pieces of Scotch Tape at the corners. Start on the wing by cutting the leading and trailing edges from 3/32 x 1/4 in. Cement them to the tissue and then add the ribs, using as little glue as possible. To make the wing saddle, cement a piece of 1/8 sq directly below the dihedral joint (the two center ribs) when putting the dihedral in the wing. When this has dried, the side of the saddle can be cut from 1/16 sheet and cemented to the 1/8 sq as shown on the front view of the wing.

The stabilizer (tail) is constructed like the wing. However, note that the stabilizer and rudder are made out of 1/16 x 1/8. It is important to keep the tail end of this model light. When building the rudder, apply cement only within the rudder area on the motor stick. Bend a paper clip and cement it to the motor stick as shown. On the front end put the prop unit in place. Assemble the model by slipping the wing saddle onto the motor stick and hold it in place with two small rubber bands. Get a loop of 1/4 flat rubber 18 in long and connect it to the prop and rear hooks. Tie the rubber strand into a loop using a square knot.

Place the wing as indicated, and wind the propeller until the rubber has a single row of knots. Release the propeller and gently push the model forward. Observe the flight. If the model doesn't climb, slide the wing saddle forward. If it climbs up and then stalls, move the wing back. When a good climb and smooth glide are achieved, wind the propeller to two rows of knots and be ready for a good chase after the model.

After successfully building and flying this model, construct a second wing using 1/16 x 1/8 wood for the entire assembly. The wing is cemented where the first wing had been balanced on the motor stick. This will produce a lighter model, which will climb and glide much better. However, it is more liable to break and should be flown outdoors only when it is calm."

Quote: "Hi Steve and Mary - Hope you both are fine and 2021 is a better year... We all can use that. Happy New Year .... The Thermal Dart by Frank Ehling is scanned from my original August 1970 American Aircraft Modeler. SIG later kitted this model and i have built several of these good flying simple models. Best regards, Jeff McCammant" 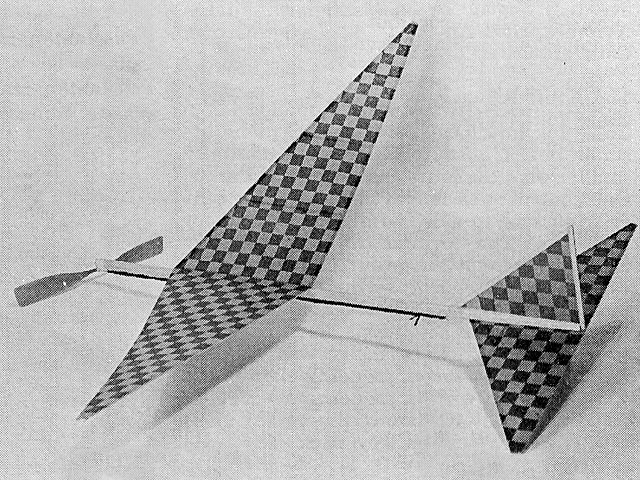