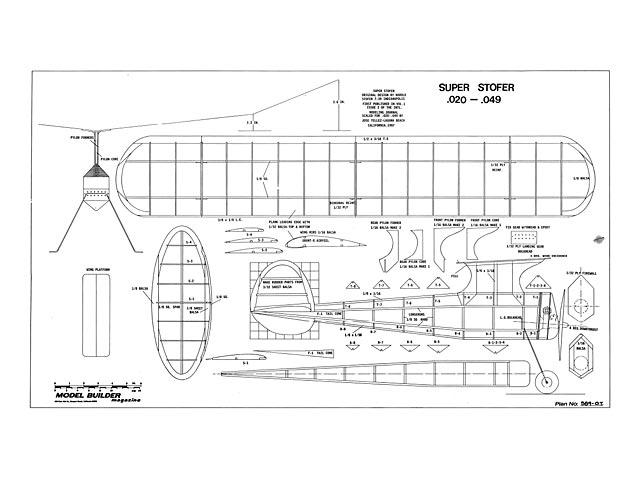 The original 55 inch Super Stofer (oz2079) design was published in the Journal of International Aeromodeling, July 1939 . This here is a later, smaller, version at 33 in wingspan from MB in 1989.

Quote: "Old Timer of the Month. Super Stofer, by Jose Tellez. Here's a simple, rather obscure Zipper-like 1939 pylon design, scaled down for .020 to .049 engines. Build it robust for sport flying or super light for high performance. Either way, it's a winner!

The original Super Stofer was a 1939 design by Harold Stofer from Indianapolis, Indiana. It was powered by a Brown Junior and the plans were published in the Journal of International Aeromodeling of July 1939. (I believe that this was one of the only two issues ever published!) Plans of the original version are currently available through John Pond's Old Time Plan Service.

I first became aware of the model through a photo in MB of a full-size Stofer built by Mal McLean of Long Island, New York. The model looked like a primitive Zipper which might be fun to try out as an OT replica. I scaled this version to yield an approximate 34-inch wingspan and placed the firewall to accept a Cox TD .020 with a small metal fuel tank in the fuselage and a 30-second KSB timer for fuel cutoff. A reed valve Pee Wee .020 and an eyedropper tank would provide ample power and simpler installation if you want to forego the sophistication and extra zip; however, the model is going to need weight up front since it has such a short nose..." 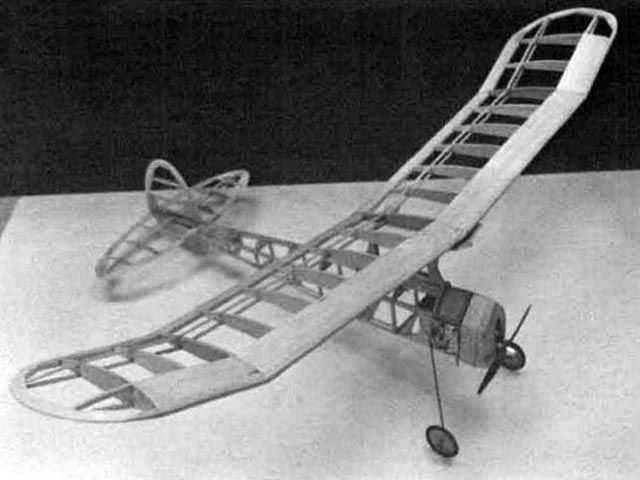