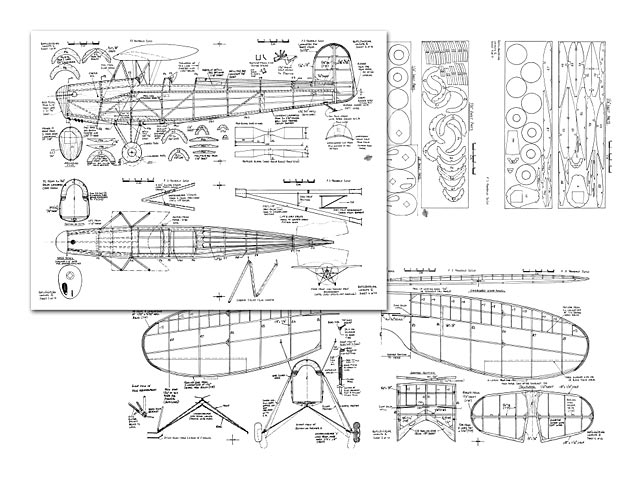 Introduction: Like many modellers, I enjoy building models of aircraft that are out of the usual rut and relatively unknown, the Levente II certainly fulfils that requirement. Prior to designing my model, I’d personally never heard of the full-sized machine, let alone seen a flying or static model of one. When I started my research, I only found photographs of unbuilt, small production run 1/48th scale static resin kits online.

During the lockdown of summer 2020 I’d built a 1/14th scale rubber powered model of a Fleet F10G, modified from the 1936 Peerless plan of the Fleet Trainer (oz10200), the well-known Canadian radial engine biplane known as the Finch in RCAF service. Keeping with my penchant for the unusual, I chose the F10G because it differed from the better-known variants in that it was licence-built in Romania and was powered by a De Havilland Gypsy Major engine. I liked the colourful national insignia and the yellow striped wingtips and fuselage too. At 24” span, I found that the 1/14th scale made for a nice sized model and decided that my next scale subject should be around the same size.

My partner is Hungarian and as Romania and Hungary have a somewhat fraught history, (don’t mention Transylvania or the Treaty of Trianon), I felt she was a little aggrieved that I’d built a Romanian aircraft and I thought that I should redress the balance by building something Hungarian next, so the search began to find the perfect type online. Eventually I found a small side-view of an interesting looking but unfamiliar parasol winged, open-cockpit, tandem seat trainer with an (for me) un-pronounceable name, a copy and paste of that name and a subsequent image search generated some rather nice three views, some videos, some images of the sole surviving original Levente II preserved in a museum in Budapest and a quite excellent Hungarian website detailing the construction of a flying reproduction of the Levente II in Hungary; plenty of information to begin the design of a 1/14th 26.5” wingspan, scale rubber-powered free flight model.

The three view drawings revealed an elegant but somewhat awkward to design elliptical, swept wing which varied in thickness along its length. I briefly considered finding another subject when contemplating the lofting of all those different wing ribs, but the excellent general proportions of the design as a free flight model and its rarity, not to mention my partner’s disapproval at my suggestion of building something simpler and not Hungarian, encouraged me to persevere with the type. The only intentional deviation from scale outlines in my model is the incorporation of a separate centre section and flat undersides to the centre section and wing panels. The full-sized machine has curved upper and lower wing surfaces when viewed from the front, which would have necessitated a lot of awkward jigging on the building board. The full-sized aircraft also features a lot of plywood sheeting on the wing which could have been replicated with light 1/32” sheet balsa sanded to 1/64” but in the interests of weight saving this was omitted and riblets substituted instead.

The drawings were duly completed on A4 sheets of paper to enable the plan to be scanned at home and uploaded to Outerzone, I’ve built plenty of models from free plans provided by Outerzone and I wanted to give something back! Before we get into the details of the construction, there follows an account of the development, manufacture and service of the Repülogépgyár Levente II, its designer, András Fábián, and their place in Hungarian aviation history..." 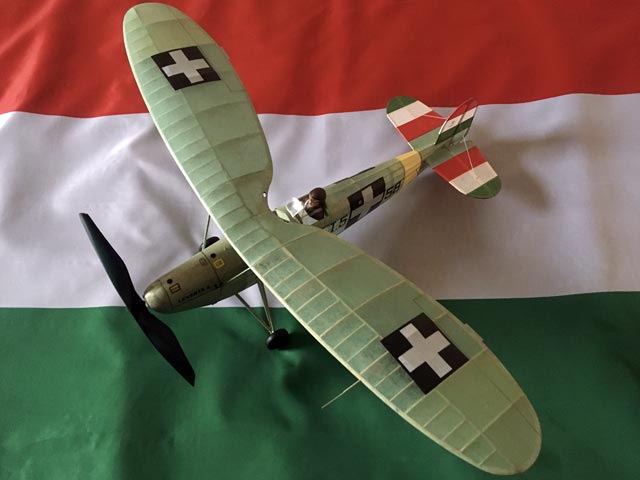 I have been following this saga on Hippocket, what a fabulous piece of work, thank you Mr Theobald!
Bert - 30/12/2020
Thank you, Bert, I hope to see a few of these built, I’m certainly happy with how mine turned out!
Pete - 30/12/2020
The build instructions are simply incredible! And the "About this Plan" article very amusing to say the least!
Dave - 30/12/2020
Amazing job!!!!
Rodrigo Burgo - 30/12/2020
Tres magnifique!
Jan Novick - 30/12/2020
Impressive Labor of Love here.
Thank You
Fred - 31/12/2020
Pete, you have done such a nice job on the plan and the instructions it seems like it might be a good idea to provide a kit of parts with printed tissue for this design. The kit could also include the jigs you have designed and some 3D printed components. If you would be ok with this send me an email at hummingbirdmodelproducts@gmail.com
Again, lovely work!
Bernard Guest - 31/12/2020
Hi Pete, Looks fantastic, and nice that it is of an unusual subject. Talking of unusual subjects, for ages I have been searching for a Hawker Horsley Plan (the type has an unusual history, but a few parts that's all that remains).
Perhaps you might consider the type as your next challenge? I have some info and small scale drawings if you are interested. martin.lavender4@gmail.com Kind regards, Martin.
Martin - 01/01/2021
Hi Martin, funnily enough, the Horsely was the first scale rubber model that I ever drew plans for, in pencil, inked with a ballpoint pen on A3 paper. I would have been about eight at the time and I seem to recall it was to have a 16” wingspan. Like most of my early design attempts, I finished the plan but never built it.
It has a lot going for it as a free flight design, particularly its long moment arm and generous tailplane area. However, I think that given the fairly stubby nose, it’d probably work best as an electric or diesel model as opposed to rubber driven. I seem to recall that it was the first aeroplane designed by Sir Sidney Camm, later to design the Hart, Fury, Hurricane, Sea Fury, Hunter and finally to contribute to the development of the Harrier, what a career!
I might look at designing a Horsely again in the future and I thank you for your generous offer of documentation, however, my next design will not feature struts, I’ve had my fill of struts in the last few months! I’m about 90% decided on my next project and am gathering components to test and documentation to assist in the design. It will be scale and it will be free flight. Watch this space!
Pete - 01/01/2021
Add a comment