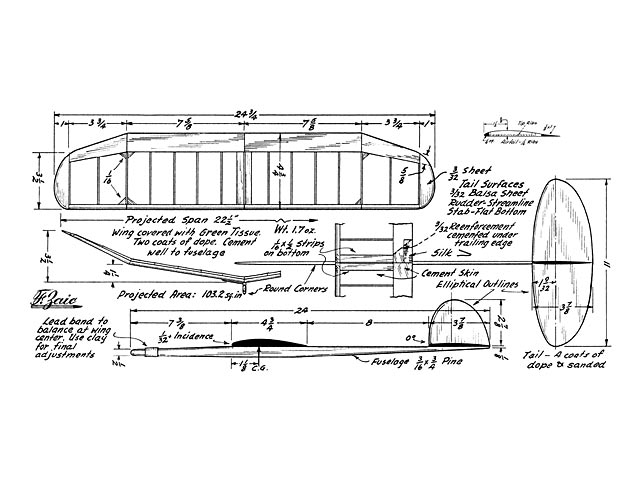 Drawings by Frank Zaic. As a new service to readers, Air Trails presents 'Record Review' of interesting models which have established new AMA American marks. Frank Zaic, internationally known draftsman and technical author has been commissioned to do the 3-view sketches.

The most unusual thing about this model is the use of a built-up wing which is quite contrary to usual practice. While well suited to the new rules, the model was designed before the new rules were. A similar model with a smaller stabilizer was used to break the Class C Open HL record last December.

It was necessary to add clay to make the weight rule, but it set a record of about 8:10.

On February 8 the Oakland Cloud Dusters held record trials at Livermore, Calif. The day was perfect. My timer was the Cloud Dusters' well known 'Mom' Robbers. The first flight was 20:09 - the first 10 of which counted. It landed about 500 ft away. The second good flight of the nine was about 5 minutes on a weak thermal. Then the wind came up and the next one was an out-of-sight flight of 9:15. I chased it on foot for about 30 minutes before it came down.

The trailing edge does not blend into the rib curve, but this was done so the average wing section between the ribs would."