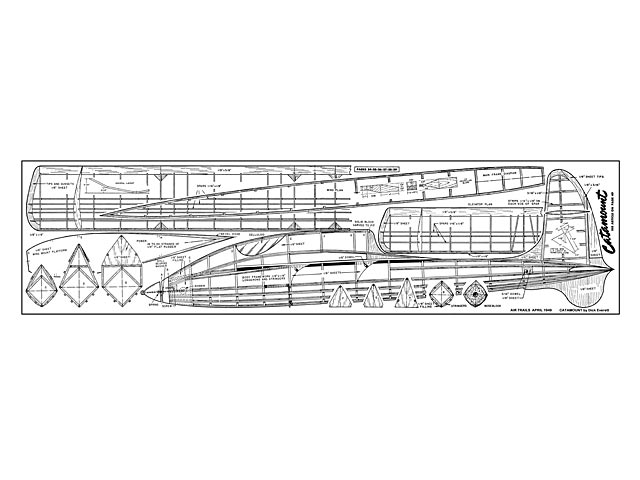 Quote: "Here's a new and novel Wakefield model by one of America's best-known contest flyers. Catamount, by Dick Everett.

WHEN it was announced that a Wakefield event was to be held last year, renewed interest throughout the world was evidenced. Inasmuch as the rules for this event are entirely different from our American regulations, it is necessary to design a model expressly for this meet. Wakefield models must have 200 square inches of wing area, plus or minus five percent, which gives a leeway of ten square inches on either side. In other words the model must have from 190 to 210 square inches of wing area as viewed from above.

Models are checked so closely in the finals that one year Dick Korda had to cut a 1/16 inch strip from the chord of his winning model's horizontal tail before he was allowed to fly it. Roy Wriston had to cement some pennies to his '36 entry to bring it up to weight. Gordon Light had to remove the covering from the center section of his '35 winner to meet the '36 rules. When the rules were printed, the 'plus 5 percent' was deleted through an error, and inasmuch as the rules were distributed, they had to be followed. To win the Wakefield event, besides having a good model, you must meet the rules.

The first test flights of the Catamount were very pleasing, but as power was added it was found that it was necessary to add down-thrust and right thrust. Since the model had a natural tendency to glide to the left, no attempts were made to fight it, as we do not think it advisable to fight forces which are naturally built into the model, even though they might be entirely accidental.

It was deemed necessary, nevertheless, to fly the model to the right under power. The reason for this is that no matter how you try, you cannot get as smooth a power flight to the left with torque, as you can to the right, against torque. The first few flights were not very long, since the model was flown at 3/4 power. But the required smooth right turn under power and the very tight lift glide were easily adjusted into the model. The three models which were built flew very much the same and have turned in times that were comparable. Frank Parmenter's averaged a very fine 5:26.4, while Charley Folks averaged 3:19.

The Catamount was carefully designed to meet all Wakefleld requirements. To squeeze in a few square inches of wing area the wing was run through the fuselage. The power flight is a combination of the fast climb of ships of this country and a long motor run such as the fellows in England use. Since the take-off is watched very closely, a two-wheel fixed landing gear was used with but one innovation, that of plastic wheels for a modern touch.

For construction purposes, the drawings which appear on pages 54, 65, 56, 57, 58 and 59 should be covered with wax paper to prevent the cement from sticking to it.

Build two basic sides of the diamond, cutting four each of the various uprights, so that you will have enough to join the two sides when they are dry. It is best to build the two sides on top of one another so they will match. When the two sides are dry, separate them with a razor blade and join, them, using the extra pieces which have been cut for this purpose. They can easily be held together and in line with small rubber bands while the cement is drying.

The 1/8 sheet wing platform should be cut to shape and carefully cemented in place. Take care when doing this, for the future alignment of the model depends entirely on this platform. Line it up carefully with the two side longerons. The top of the platform should be parallel with them.

The rest of the fuselage, in the form of top longeron, fairing strip, stringers, sheet fill-in for nose and cabin, and plastic for windshield, are applied at your leisure. The nose block should be laminated from 1/4 in sheet and faired into the fuselage. Two large face bushings are used for the shaft bearing in the nose block. The landing gear is in two pieces bent as shown, cemented and wrapped with thread, and cemented again to provide the strength necessary to stand up under the strains of landing and taking off. When all these parts have been added and the cement is dry, the entire fuselage should be sanded.

To construct the wing, first cut 29 ribs to shape from 1/16 sheet balsa, medium hard. Notch them for spars and leading edge and sand them smooth. Trailing edges are from regular 5/8 Jasco trailing edge stock, but for those who do not have it; it can be cut from 1/8 sheet and tapered before cementing into position. The entire wing, with the exception of spars and gussets, is built flat. When the outline is dry, dihedral is put in, cementing the gussets in place at this time to reinforce the joints. The spars are added and overlapped 1/2 in to provide a simple, strong, neat joint. The wing when dry is sanded smooth.

The horizontal tail is constructed in much the same manner as the wing, with the following exceptions. The spars are 1/16 square, and two special ribs are used at the center section for the covering..." 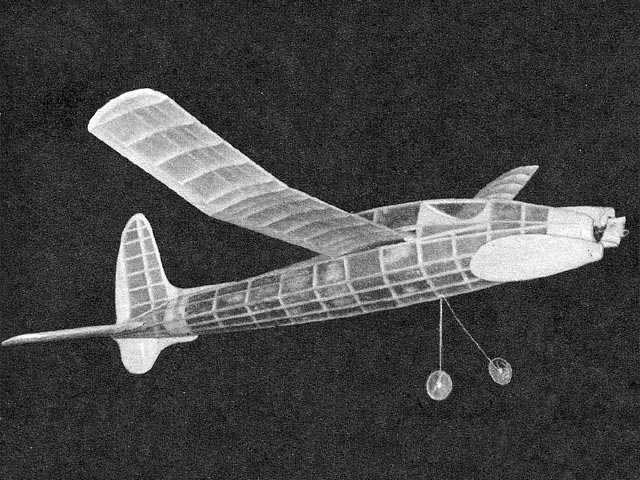