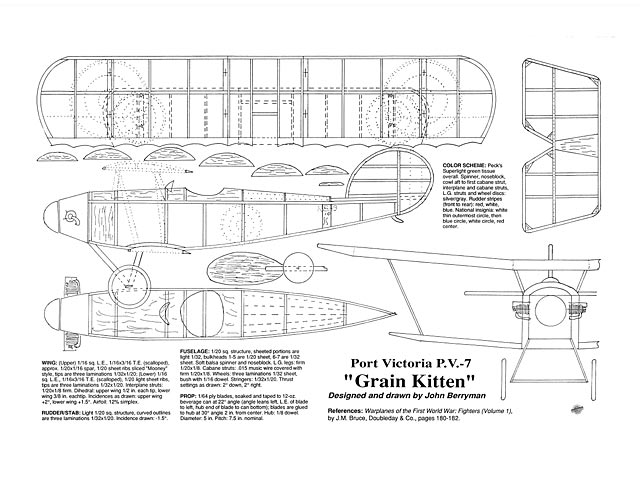 A product of the Royal Navy Air Service Experimental Construction Depot at Port Victoria, the PV-7 was a failed effort to build a light anti-Zeppelin fighter that could be flown off of torpedo boat destroyers. Weighing 284 pounds empty and less

than 500 pounds with pilot, Lewis gun, three drums of ammunition and 2-1/2 hours of fuel (less than half the weight of a loaded Bristol Scout), the PV-7 was hampered both by poor handling qualities and the asthmatic performance of its 35-hp ABC engine.

After some test flights that began in September of 1917, the Grain Kitten and its competitor, the PV-8 Eastchurch Kitten (which suffered from identical powerplant problems), were abandoned. This may have been all to the good, for one wonders about the wisdom of flying over the cold and stormy North Atlantic, taking occasional potshots at a snooping Zep, in an aircraft that weighed less than 300 pounds.

The PV-7, with its reasonable nose moment (for a WWI ship, anyway), large tail and generous wing area, has the potential to be a pretty fair Peanut model; certainly a 'gumband' powerplant will perform more reliably than did the gasping ABC twin in the prototype!

WING: The upper wing is constructed 'Mooney style' with sliced ribs made from 1/20 stock, while the lower is made conventionally with ribs cut from light 1/32. There should be no surprises here. The technique I use to make the scalloped trailing edges is to carve a semi-circular shape from 1/2-inch soft balsa, glue some 150-grit sandpaper to the shape, and sand the scallops into the trailing edges before slicing them free from the 1/16 stock. I also go to a bit of effort to make secure mountings for the cabane and interplane struts. Alignment is very important on bipes (and sesquiplanes, which is what, strictly speaking, the PV-7 is), and anything you can do to assure accurate and secure alignment of the wings is time - and weight - well spent.

TAIL SURFACES: There isn't much to say about this ut-terly normal construction. Of course, this is the place to use that light 1/20 stock you've been hoarding.

FUSELAGE: Again, construction is straightforward. As usual, I constructed the fuselage using my creepy 'install-temporary-bulkheads-and-build-in-the-air' method. if you have a better system, by all means use it. After the forward formers are installed, and be-fore you sheet the cowl, you'll need to install light (.015-inch) music wire cabane struts at the locations shown on the plans. These will eventually be covered by balsa 'false struts.' The shape of the struts is determined from the front view of the model.. " 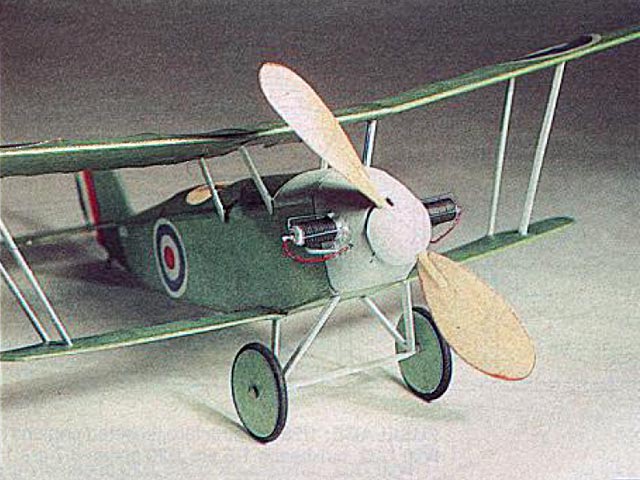