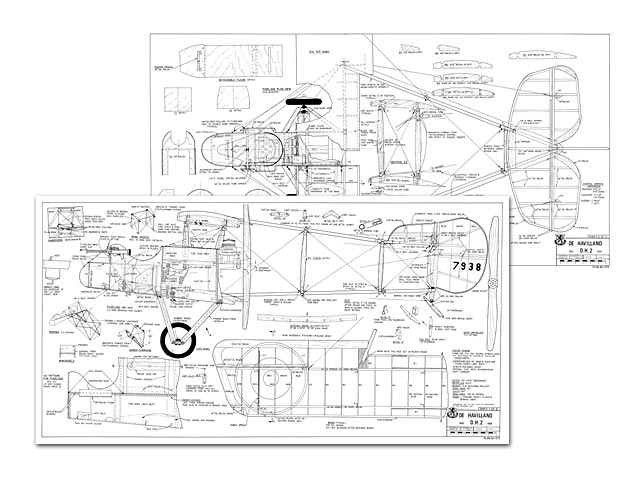 Quote: "If ever there was a plane that truly deserved the title of 'Wood, Wire and Fabric,' it is the De Havilland DH-2.

The first prototype DH-2 was completed in 1915, and its first engagement and victory over the enemy came in March 1916, while attached to No. 24 Squadron. The DH-2's proved themselves to be superior to the Fokker monoplanes but, with the appearance of the fast and well-armed Albatros in the autumn of 1916, they became outclassed and in June 1917 were detached from operational service. The last recorded flight was in March 1918. No.24 Squadron was originally formed by Captain LG Hawker, however, towards the decline of the DH-2's, Hawker was killed in combat by the now famous Manfred Von Richthofen in one of the longest individual air combats of the war.

The DH-2 was generally considered to be a most effective fighter, but suffered from the susceptibility of tail booms to breakage when hit by any detached part of the rotary engine, the early engines being subject to losing cylinders.

However, overlooking the defects, I believe even Snoopy would be quite willing to trade in his kennel for a DH-2 - what better mount for a World War I pilot?

The initial model prototype was completed in May 1971 and, up until to date, has been undergoing many design improvements. The model, unfortunately, wasn't one that flew straight off the drawing board but, in fact, staggered off and fell over the edge! The .35 cubic inch Enya was soon replaced by an OS H6OF. However, after much repairing, design improvements and determination, the model is a joy to fly and can now be handled by an intermediate type RC pilot.

The model is easily started by hand flicking with a chicken stick or, better still, an electric starter. I use a permanent extension to the glow plug, and use a long tube to adjust the needle valve. Thus, no chewed-up fingers.

The model will taxi on the ground except in strong winds. To take off, you just point her upwind, apply throttle, the tail lifts off the ground and, before you know it, you're airborne. It has no tendency to ground loop. Flying speed is very realistic, and it performs maneuvers like the full size conterpart. Due to the high drag of all the wires, landings are best performed with about quarter throttle. Bring her in with power and cut back on touchdown. She will soon drop her tail and roll to a stop. (Even if you do bungle it and she tips onto her nose, the motor will not stop and there are no broken blades.) You can now taxi her back to the pits to the applause of the crowd. What satisfaction, what a show-off you're becoming! Oh well, you will have to fly it somewhere, and why keep it hidden.

The model is as true to scale as my information would allow, with a few modifications for longer life and ease of construction. Reference was made to Profile Publications Volume No.91; August 1966 AeroModeller, Aircraft Described No.153, and Aircraft Illustrated Extra No.7. There is, therefore, some room for further improvements depending on how scale you wish to go. If you do wish to go super scale, it is advisable for you to obtain a decent size 3-view and then check your blueprints to them, as blueprints are not the most accurate on reproduction.

The plans were redrawn and rechecked from my original outlines, and have taken three months to do. I even found errors in my original layouts. The plans should supply all the necessary information for building, but I will supplement them with some detail notes for those who have the patience to read the instructions before building.

FUSELAGE: Cut out the fuselage from 1mm ply using the pattern shown. Only half the pattern is drawn, but you should be able to duplicate the other half about the centerline shown. Epoxy on the doublers and drill all holes. Cut out the formers and, without losing your temper, epoxy the formers to the fuselage. You may find it easier to first mark the centerlines and positions of the formers on the inside of the fuselage and moisten the outside of the ply to aid in bending. Now clamp the whole mess together, ensuring everything is aligned, and allow to cure overnight.

WINGS: The wings can now be commenced and are quite straightforward. The inter-strut connectors (Detail D) are then epoxied to the 1mm ply ribs. Don't forget the 1/4 in ply block and 1/8 screw for the aileron bellcranks underneath the two bottom wings. The wings should now be covered and painted to save messing about between struts etc, later. I still cover my models with tissue as it is cheap and looks realistic on vintage models. The model was painted for realism with colored dope, obtained by mixing Humbrol paint with clear dope, any thinners lying on top of the paint being removed before mixing. The wings, as is the whole model, are then painted with Estapol Scandinavian Matt Varnish for a dull weathered appearance. When dry, warp the wings into alignment, using a heater and then cold air..." 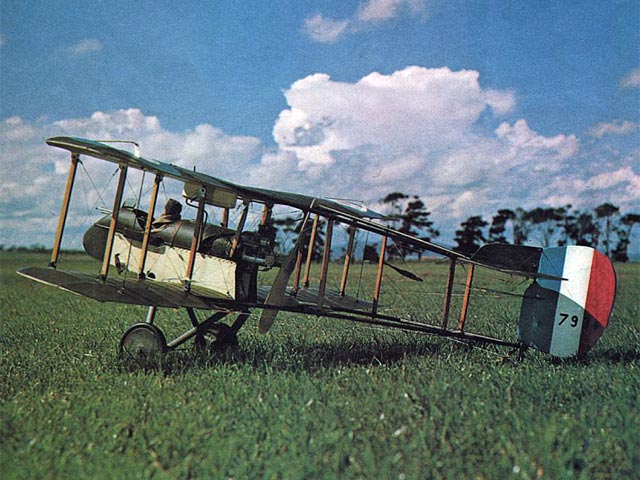