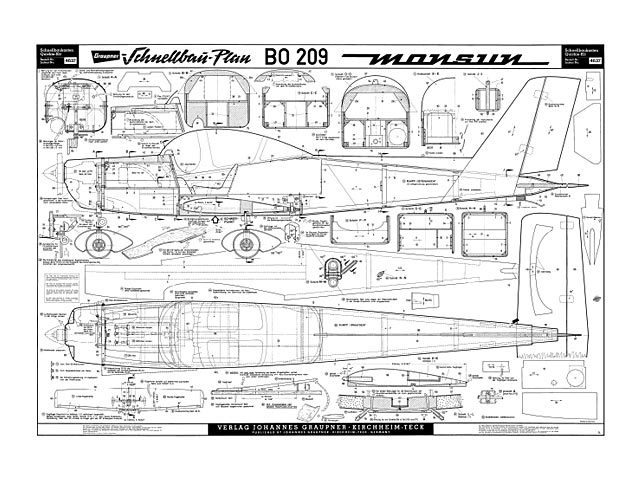 Note this kit used a foam wing, so no wing ribs or formers are shown.

ONE OF the latest Graupner kits, the Monsun is a semi-scale model of one of the current breed of two-seat light aircraft, and features a large bubble canopy and tricycle undercarriage. The kit contents were described in detail in the RM Trade News for November '74 but, basically, comprise obechi covered foam wings and a conventional built-up balsa fuselage. The plan and instructions all seemed quite clear but, to make sure, I spent an evening studying them so as to familiarise myself with the whole sequence of construction. No queries emerged, so - on to the building board.

Construction: The fuselage is very easy to put together - and quick - as all the diecut parts are very accurate and only need light sanding. Curving the side panels at the nose section and fitting the pine doublers looks a bit tricky at first but, in fact, is quite simple if you follow the instructions and use the jigs and clamps supplied in the kit, and glue and screw them down to the building surface. I mention this because they manage to make it look harder than it is, which might deter the less experienced.

About three evenings' work saw the fuselage completed up to the point of engine cowling and noseleg assembly. I was not quite happy about the motor mount, which is a nylon plate, to be bolted to the engine backplate - direct - and I felt that the heat of the engine might soften the mount. This is a test-report, so I fitted it, and we'll see. As I don't possess the recommended OS 4o, I fitted my HP 4o with my home-made silencer, as the photos at the foot of this page will show.

I've never been very keen on styro wings, but this pair are really quite the best I have seen in a kit. Assembly was easy, but the well for the aileron servo is rather shallow due to its being relatively close to the trailing edge, which means the servo stands high, with consequent crash-vulnerability. However, that's crossing our bridges.

The wingtips are rather an unusual shape, being reflexed upwards at the trailing edge, but are quite easily carved from the blocks supplied - though the matching in density of these could have been better, I feel.

The spats are not included in the kit, but as a spat set was given to me with the review kit, I have fitted them. Flying from grass, they might prove a problem, but a point here is that the full-size machine has a retractable nose-wheel, so no spat is fitted, which might help the model to get off from grass. There is actually more work in the fitting spats than you might imagine so, unless you fly from tarmac, you may decide not to bother with them.

Installation: At this stage, the other 'extra' crops up - the RC installation pack. This includes nylon tubes and rods, metal devises, and strip-aileron horns, none of which are included in the kit itself, so it's as well to see you have the necessary items, even if you don't buy the Graupner pack, since the rods and tubes have to be fitted during the fuselage construction.

The servos are mounted on a ply plate and spot glued onto rails on the fuselage sides, and the receiver lies in a foam bed, forward of the servo group, secured with a rubber band. The Ni-cad battery fits in a padded bay, just forward of the wing seat, under the tank compartment. (The tank recommended is a 6 oz Graupner one - not included in the kit). I used a linear servo for the throttle (being close to the fuselage side) and rotary for the remainder.

The airframe, less engine and radio, weighed just over 4 lb, and the all-up flying weight is 6-1/4 lb.

Finish: This is, of course, a matter of personal choice, and I use iron-on film on foam wings only. The fuselage and tail I have covered with tissue, sealed in the usual way, and painted with K & B Super Epoxy paint, which is OK on the plastic cowl, incidentally.

Trimming and flying I found (unlike most reviewers!) that I had to add a few ounces of ballast to the nose to bring the CG into place, owing to the rearward position of the radio (dictated by the cockpit floor).

The first flight was made in rather unsuitable conditions as - this time like most - once the model was ready, I couldn't wait. Would those spats baulk the take-off? The grass was pretty short, but still grass. I started up the motor and set it to a fast idle, as I didn't want to risk a dead stick in these conditions - gusty 20 knot east wind. All set to go - into wind - open up - a short run and the Monsun was airborne.

From here on I had to fight the elements, and after about six minutes I called landing, and succeeded in getting her down to a quite soft three-pointer, despite the turbulence. Discretion then took over and, honour being satisfied, we decided to await better weather.

When it came, I slowed down the idle on the motor for better low speed control, and opened up once again. I kept her on the ground for about 25 yards to gain speed - tracking was very good, with little effort to keep straight - a touch of up elevator and she was off and climbing away nicely. The left wing was a bit low, so I let her turn that way and throttled back to half speed, flying around to get the feel of things. This aeroplane flies itself, I thought, very stable - so I shut the motor right back for some slow, low runs. These were not so low as your cameraman would have liked. but one was at just above stalling speed and she handled like a dream.

After a few of these we decided to try a touch-and-go - but that rotten wind had got up again, plus the fact that I didn't want to mangle the spats - so I opened up and tried some rolls. These were not bad, though a little barrelly - no doubt can be improved as one learns its characteristics. Next some fast runs, with tight turns, pylon style, only to find that in the turns the nose goes up. and she wags her tail - that CG can't have been quite right after all.

At this point, the motor cut, so I called 'deadstick' and pushed the nose down for safe airspeed - a nice glide - then I sudenly saw a big puddle in its path, and let the forward-stick off and - guess what? - it tip-stalled, about two feet from the deck, and semi-cartwheeled. As luck had it, the only damage was a sheared nylon wing-bolt (that's what they're for!) which was soon replaced.

Back in the air again, then, for some loops, rolls, more low passes (she really does look quite scale!) then another rough landing - must add more ballast and get that CG right, ie as shown on the plan!

Summary: A very nice model, pleasant to fly and capable of aerobatics if desired. A model I enjoyed building and flying, but the CG seems to be more critical than most, so check, check, check !

Oh, and as something of a post-script, my misgivings about that plastic motor mount do not seem to have been justified. To date, at anyrate, it seems to have been quite unaffected by engine heat." 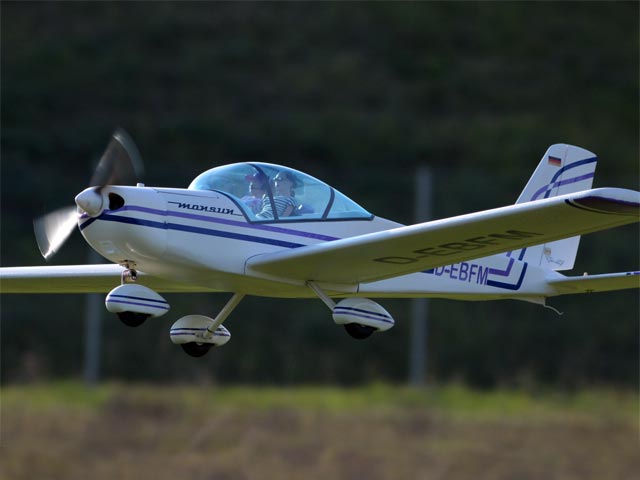