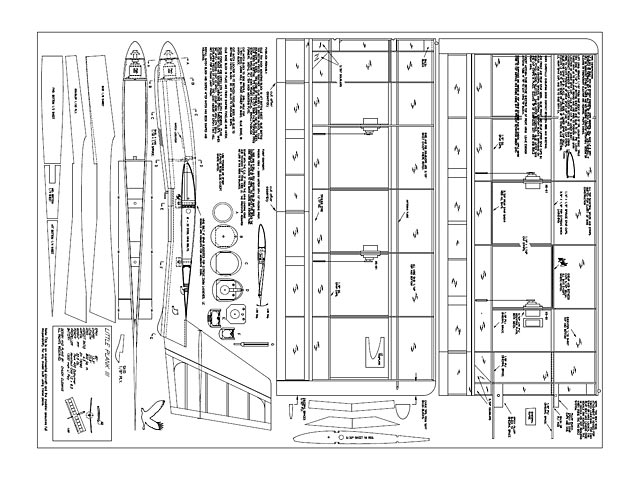 Quote: "A little about the Little Plank III: The first Little Plank was the result of collaboration with Dave Jones. Dave ran Western Plan Service which specialized in flying wing designs, most of which were planks with zero sweep-back. Dave and I built and flew models together in high school and after stints in the Air Force and college we resumed model building and exchanging ideas. Dave lived in Torrance California and I had settled in Bellevue, Washington.

In 1971 Dave sent me a sketch for a small 54 in span plank for high start or winch launch which he called the Little Wing. Based on his concept, I drew plans and built the Little Plank. It was very simple with two servos, one for each elevon. The elevon servo was mounted on a sliding tray which was moved fore and aft by the elevator servo. No electronic mixers in those days! Despite having no dihedral and a span of 60 in, it was easy to control on high start or the 6V winches of the day. It was fun on the slope and would thermal in light lift. I also flew it with a TD .049 in the tail.

In October of 1971 we submitted the design to RC Modeler and it was accepted for publication. That was a first for either of us. Getting paid for doing something we would do for free was great. The Little Plank (oz5163) appeared in the May 1972 issue of RCM.

Don Dewey was editor of RCM at the time and apparently had doubts about the design. He built a Little Plank for himself and put more than 100 flights on the model. He was so impressed that he wrote nearly half a page extoling its virtues which appeared at the start of the article. Heady stuff indeed!

In 2007 I finally got around to designing the Little Plank III. Dave Jones developed plans for the Little Plank II, but as far as I know it was never built. Dave passed away in 1991, but left us the Raven (oz12696) and numerous other designs for flying wings. Thanks Dave! While I couldn’t improve on 'Cute,' 'Simple' and 'Fun,' there were a few things that I wanted to try; a better airfoil with less reflex and drag, tow hook closer to the wing, and electric power.

I’ve been flying my Little Plank III since 2008 and it looks like it’s going to be around for a while. It penetrates much better than the Little Plank. It has four degrees of dihedral which means you don’t have to watch it all of the time, just most of the time. The tow hook is much closer to the wing which eliminates that nasty pitch up at the start of a winch tow. I think it’s easier on the eye than the Little Plank.

I stayed with the pusher configuration and used twin fins to provide prop clearance without having to extend the aft end of the fuselage. Separate surfaces were provided for elevators and ailerons.

It took only a few flights to convince me that changes were in order. The pusher configuration that worked fine with the 6 inch diameter prop on the tail of the Little Plank turned out to be not such a good idea with a 12 inch diameter prop. I quickly discovered that hand launching under power was risking a bite on the arm from the prop. The alternative was to launch with the power off and try and get power on and things under control before touch down. That was a little too exciting for an old guy like me, so the two rudders became one and the motor moved to the nose. The change was made to full span elevons which eliminated a couple of servos.

When building Little Plank III use medium to lite balsa. The spar with webs is very strong and should handle moderate to strong winch loads. With the elevator at the trailing edge of the wing I doubt it has enough authority to break the spar while on the winch.

Glassing the fuselage with 0.75 oz cloth adds little weight and adds a lot of strength and ding resistance. While the Little Plank III is pretty docile in the air it is definitely not a beginner’s model. For the first flight the CG should be at the front of the range with full up trim and full power. If possible have someone else launch the model. Get a few hundred feet and then sort out the trim and power setting. I use 30% - 50% exponential to soften the stick around neutral.

Remember that the Little Plank is a Woodie and Woodies Rule!" 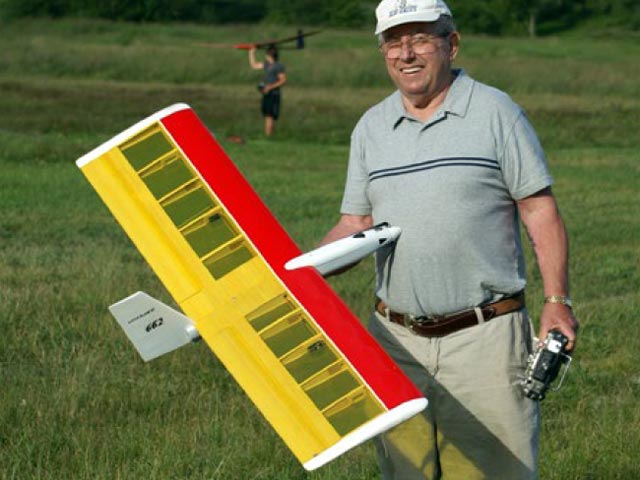 Highly recommended. It regularly goes with me to the flying field and gives great flights. I love how the plank layout looks in flight like the eagles and hawks we share the field with. Flights are always a pleasure. It is also compact to transport and store.
C McCarthy - 12/05/2022
I am very pleased with the Little Plank III and would like to see more copies flying. I have attached a jpg [pic 004] of my version and hope you can use it. I really enjoy browsing the plans and books on your site. Thank you, from Abbotsford, BC, Canada
C McCarthy - 12/05/2022
Add a comment