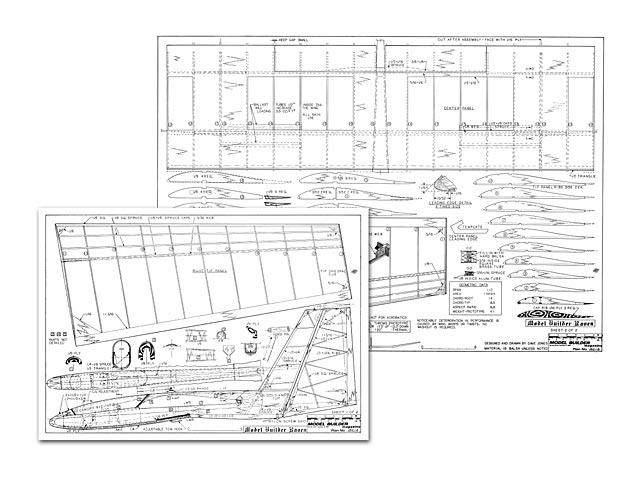 Quote: "Model Builder Raven, by Dave Jones. The latest in a long series of tailless designs by the author, this one features a higher aspect ratio, a different wing section, and 'D' tube costruction in the center section for additional rigidity.

The MB Raven is a competition soarer of tailless configuration. It will not make you fly better or worse. But, perhaps you can utilize the different capabilities it provides. The 'Plank' configuration relies on simplicity to provide a reliable soaring machine. Sweep and twist are not necessary for stability. Twist has a tendency to change during the heat of battle, causing inconsistent results. The total pitch stability is provided by the wing section in conjunction with the correct center of gravity. Pitch inertia is very low because of the lack of an aft body and a tail some distance behind. Inertia values are determined by the weight of an item times its distance to the center of gravity squared (wd2). This means that a 10% decrease in arm results in a 19% decrease in inertia for an item. Consequently, a small control surface provides sufficient power for maneuvering in pitch. The prototype has a throw of 17.5 degrees of up elevator. This is more than adequate for thermal flying. A full 40 degrees of up can be used for special stunts such as hovering into the wind. Directional control is accomplished by a vertical tail similar to a tailled sailplane. The pod, center wing including elevator, and the fin/rudder are one unit, allowing a permanent hook-up of the controls.

This type of sailplane can be built light without extra effort. Your local flying conditions can be matched by building the model light or heavy. A satisfactory range of wing loadings is from 4 to 8 ounces per square foot. The only noticeable difference is in flight, stall and landing speed. As you might expect, the heavier loadings provide better penetration. Consistent with a tailled airplane, down elevator is not as effective as ballast. As shown, this model should come in with weights of 6 ounces for each outer panel and 29 ounces for the center and equipment (2 channels). A completely sheeted wing (1/16) should put the loading in the 5-6 ounce range.

BACKGROUND: This type of model has a long history with me. I built my first 'Plank' style flying wing 32 years ago. Later, when I returned from a stint in the Air Force and completed my schooling, I built another small free flight plank. This plane showed some promise, so I doubled its size and later added a radio for slope flying. Since then I have built upwards of twenty different radio control plank designs. The biggest improvement in performance came with the development of higher performance wing sections. This led to the well known Raven design.

Since then, several different configurations have been tried. None have shown an overall improvement to the forgiving characteristics of the Raven. More than 400 contest flights have been flown by members of the Soaring Union of Los Angeles (SULA) with plank type flying wings. This has been invaluable in improving this type of sailplane.

MB RAVEN: The Model Builder version draws heavily on the original Raven for its basic configuration and control arrangement. Known improvements from other models have been included. These include the most obvious higher aspect ratio, as well as a different wing section. This employs 3.3% camber and 9.4% thickness combined with essentially a flat bottom. The wing center section also includes a sheeted 'D' tube leading edge to improve the torsional stiffness. The tip panels are of the turbulator spar type, which help to keep the inertia low. This improves the roll/yaw response.

The prototype is a little lighter than I expected, coming in with a loading of 4.3 ounces per square foot. Thermal flights should be satisfactory up to a loading of at least 8 ounces per square foot. So a lot of room is available for experimentation as far as structure and weight carrying is concerned. One thing has been obvious, a lot of dihedral is not needed for these plank configurations. More dihedral than shown will cause the turn to tighten. As little as 4 degrees have been tested with adequate turn control. However, the turn will automatically open unless held. Also, the type of dihedral is not critical. Straight, Raven type, and multiple dihedral have all been tried with no apparent 'best' type. The flat center section allows a simple control hook-up. Nothing has to be un-hooked for disassembly, possibly changing a trim to your flying detriment. Straight dihedral does give more ground clearance for landing. Flight characteristics will be essentially equal.

DIFFERENT VERSIONS: This model has been designed for local conditions, as you might expect. These consist of low winds and light to strong lift. Contest tasks that it must fly include time in excess of its unaided glide time. This requires a model that can go some distance looking for lift or utilize very light lift. This model has both of these characteristics; hopefully in the right ratio. Don't give up at low altitude. This model is very much at home in light, low-level lift. MB Raven is stable enough to fly 'hands-off' as well as come back from downwind in winds up to 12 mph. This is with the prototype wing loading, but don't get below 30 degrees above the horizon before starting back. The other requirement for this model is to get those landing points. This requires practice with the plane to become familiar with its characteristics. The most successful approach in our club has been to keep the speed up during landing. The wings must be level and not turning when the nose is forced down. It can be floated in during no-wind conditions... " 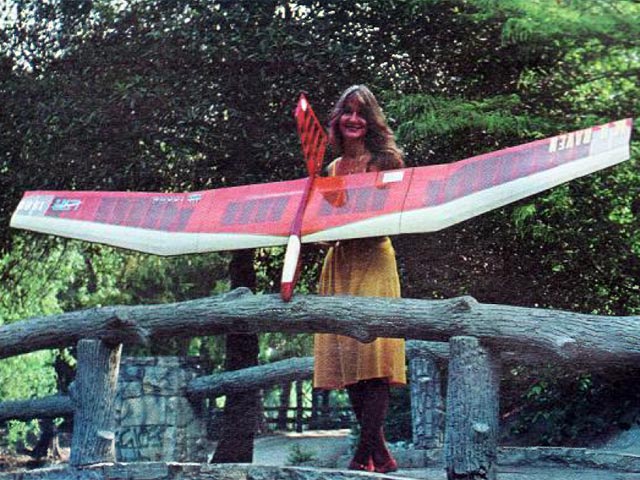 I built and flew the Model Builder Raven back in the 80's. Had hundreds of flights. Probably the most stable sailplane I have ever built and flown. I've been looking for this plan for several years. I'm like many other old timers out there. I'm ready to build another one. Might switch to electric versus winch launch. Based on the experience I had with my original Raven, I see no need to make any changes in building the second one. Thanks for adding the Raven to the ever expanding list of plans. Bob Sealy Cookeville TN
Bob Sealy - 25/12/2020
Add a comment