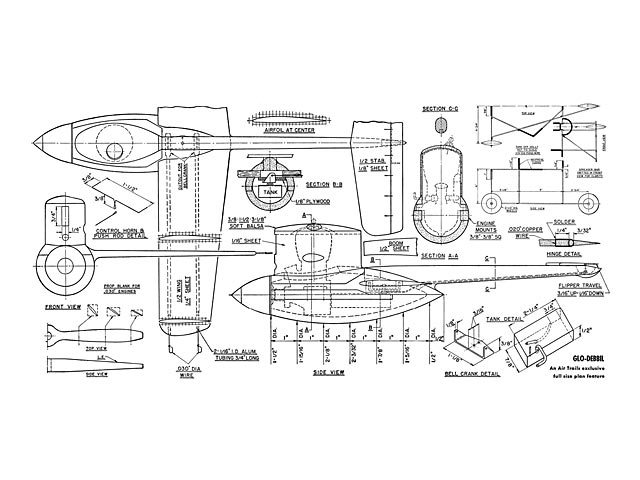 Quote: "Glo Debbil, by DW Newberger and WT Turner. Two of the Nation's top speed merchants get together to bring you this Class-B racer.

WITH the advent of the glow plug the opportunity of designing a speed ship that was a little out of the ordinary presented itself. The idea of a pod-and-boom type fuselage speed ship has been considered many times, but because of the difficulty in placing ignition accessories in such a small space it had to be discarded in favor of the conventional full length fuselage. Most of us know that this design feature does not add greatly to the aerodynamic efficiency over the more conventional type fuselage. I Iowever, there are certain advantages over conventional design. These are light weight and simplicity of construction.

As you first look at the Glo-Debil it will probably strike you that the ship is too small for a 30 cu in engine. The initial advantage of glow plug operation can be seen in this first impression. With reduction of weight (due to the elimination of ignition accessories) lifting surfaces can be cut to a minimum, and with a reduction in area, drag will also be decreased, thereby increasing ultimate speeds.

The second and probably most important advantage is that with a reduction in total weight, less actual power is needed to keep the ship in the air. This extra power can be used for driving the ship through the air faster by increasing prop pitch and reducing diameter. The prop shown in the plans together with a Torpedo engine has flown the Glo-Debbil at speeds exceeding 130 mph.

The only change that has occurred since the original conception of the Glo-Debbil has been in the placement of the wire leaders from the bellcrank to the flying wires. Originally these wires came out from the pod below the inboard wing. The inclosure of these wires in the wing increased top speeds by 1/2 to 2 mph. To some this may not seem to be much of an improvement for the extra work involved. Nevertheless, numerous contests have been won with less than 1/2 mph difference between first and second place; so a little extra work can pay off where it counts.

Construction has been held to the most simple methods known without detracting from performance. Read the instructions carefully to insure top speeds, Start with the fuselage. The pod can be turned on a lathe or carved with the aid of templates. White pine was chosen as the material for the original pod, but hard balsa can be substituted if necessary. After the pod has been turned, split lengthwise through the center line and hollow out both halves to approximately 1/4 in shell thickness. Slots for the ample motor mounts are then cut in the pod. Before the mounts are installed in the plane, line up motor on the mounts and drill through. Motor mount bolt heads should be soldered to a tin strip before being inserted into the motor mount holes. The mounts can now be glued into the lower half of the pod. After glue is thoroughly dry the mounts are rounded off to conform with the curvature of the pod..." 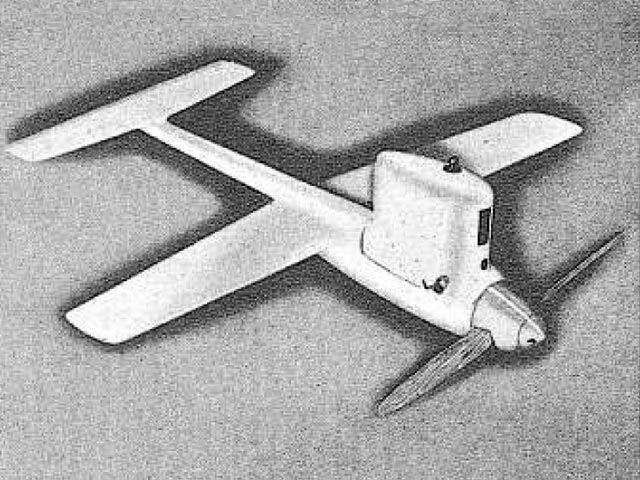