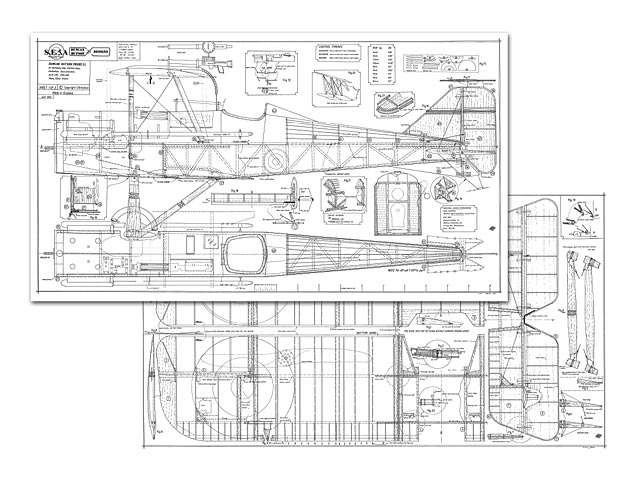 The last R/C scale biplane I built was a Sopwith 1-1/2 Strutter. This used single channel gear operating rudder and elevator through a rubber escapement and if you can remember those it shows your age! Ever since then I have had this little niggle at the back of my mind that it was about time I built another bipe, so when Duncan Hutson asked me if I would like to review the SE5a (his first venture into kit production) I nearly took his arm off, no mean feat over the telephone. Readers of this magazine will know Duncan through his scale column and all scale buffs will be aware that Duncan has, for many years, been a top designer, builder and flier of competition winning models. So two things could be guaranteed: his SE5a (i) would be very accurate and (ii) would fly well.

The kit, delivered by Duncan himself, was a pre-production job, and as it came in a huge grocery carton I cannot start by saying how I 'excitedly unwrapped the parcel to reveal a tightly packed box'. But my box was certainly very full and by the time Duncan had sent yet more goodies, as he found further gaps to fill, I marvelled that it could all fit into one container. I have since seen a production kit which is very well packed with a splendid label depicting the model. Die-cut ribs and riblets, formers, hardwood strips, spars and struttery, wire, flat steel strip in bundles of three sizes for rigging, balsa, an enormous and weighty pair of Flair wheels, two large and fully detailed fibreglass mouldings, a vacuum formed radiator (think of the work that alone would save!), a Williams Bros. Vickers machine gun kit, bags of nuts and bolts, a metal pinned Robart hinges, a sheet of instrument dials, a magnificent set of roundel transfers... the list goes on... All these with a set of rolled plans and a book of instructions.

Preparation: To do full justice to all this, I broke the rule of a lifetime. I read the instructions first! Just as well, for although the basic structure is traditional and follows the full-size closely, there is a lot of it and there are some small but vital steps that, if missed, could lead to embarrassment later on. So on no account should the builder go dashing on without fully understanding each successive move.

I started with every intention of keeping my version of the model fairly simple and straightforward, but as I proceeded with the building I got carried away, as usual, and went the whole hog! I therefore found that I needed far more information than I had available. A list of useful titles will be found at the end. I was honoured to be lent Duncan's own photographs, taken at Old Warden and Hendon. These were invaluable. Dare I suggest that Duncan might be persuaded to do a Photo-Pack?

Several things which involve small modifications to the airframe must be decided before making a start. These variations are covered in the instruction booklet:

(a) The power plant. Duncan powered his with an OS 120 four-stroke, an ideal engine. The only large engine I had was a Super Tigre 3000, somewhat over the top but it would have to do. Moving the firewall back to make room for the bulkier engine restricted the space available for the servos and radio and, with the wisdom of hindsight, I realise that instead of shoehorning the gear into this limited space, I should have made a hatch beneath the fuselage amidships where there was room to spare.

(b) The rigging attachment method. The plan shows alternative methods.

(c) Choice of systems to operate the ailerons. I chose to fit a servo into each of the two lower wing panels to operate the ailerons, this being the safest and surest method with a model of this size and weight and I acquired two Ministar servos to do the job. Suitable holes had to be planned for the servo leads through the wing ribs, and for the route of the Y lead in the fuselage.

Wings: Not being able to burn as much midnight oil as I used to, it took me three weeks to build all four wing panels and the top centre section. Care has to be taken when building the wing panels, for all four are shown in two drawings, top and bottom wings superimposed. As top and bottom wing panels have slightly different rib spacing and rigging attachment hard-points, it is important to get them right. I found the rib lengths to be a little variable, but by selecting the hardwood trailing edge strip carefully I accommodated this..." 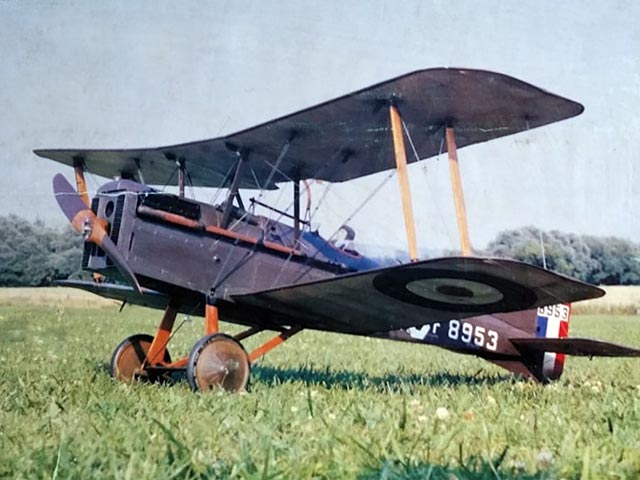