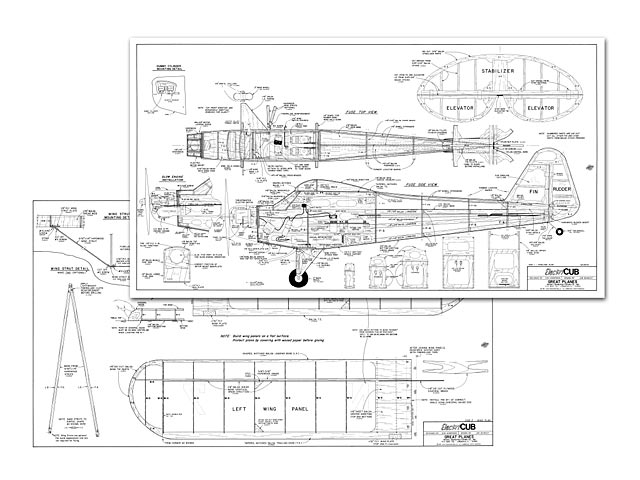 Note this is the earlier (Mk1?) version of the plan. It does not show the bolt-down wing (or ailerons) that appear in later versions.

If you asked an average enthusiast of 'classic aviation' whether modeller or full size, to name any three aircraft of that era, the answer might be Spitfire, Tiger Moth and Piper Cub, but not necessarily in that order. Although I've been an R/C modeller for nearly thirty years, it occurred to me that I'd never built any of those three classics, but that was soon about to change.

From 'Chummy' to 'Tiger Kitten' to 'Cub': I always like to research scale models before building one, so I decided to find out a bit more about the 'Cub'. Briefly, the story began in the late '20s when the Taylor brothers, Gordon and Gilbert, one-time barnstormers, decided to build and market a small two-seat monoplane they called the Chummy. Gordon Taylor was unfortunately killed in a crash and his brother moved the business from Rochester, NY. The relocated Taylor Company went on to build five Chummys before the Great Depression caused financial difficulties for the company.

Taylor was fortunately rescued by a wealthy oilman named William T Piper who financed the development of another plane designated the E-2, with a Brownbach two cylinder 'Tiger Kitten' engine. The motor unfortunately proved insufficiently powerful for the E-2 but the name 'Tiger Kitten' prompted the suggestion of 'Cub' for the aircraft.

Ultimately, the Taylor Company was forced into bankruptcy. At this point Piper bought the assets and retained Gilbert Taylor as his Chief Engineer. A further redesign took place in 1936 with the aircraft now becoming the Taylor J-2, but Taylor then left to set up Taylorcraft Aviation independent of William Piper. Piper, who had meanwhile formed the Piper Aircraft Corporation, held the production rights to the J-2, and the 'Piper' Cubs continued in production until 1938 when an even more improved J-3 Cub was introduced. By 1947 over 14,000 Cubs, or their military L-4 and 0-59 derivatives, had been produced. 1949 saw the introduction of the more powerful 'Super Cub'.

Building the Cub: Never having built from a Great Planes kit I was intrigued to see if the product lived up to the fine reputation of this American manufacturer. I had no need to worry; I think I can truthfully say that I have never built from a better quality and more complete kit.

Two full size and highly detailed plans were revealed along with the most comprehensive hand-book I have ever seen. The centre fold of the hand-book also had an A4 size reproduction of each full size plan - very handy if the building plan is covered with a half-built structure and you need to refer to some hidden part of it.

The Cub kit proved to be very complete. Stacks of pretty good quality wood (balsa, ply and hardwood) much of it pre-shaped or die-cut. The die-cutting was excellent, every component popping cleanly out with only the lightest pressure. Also included were many of the hardware items needed to complete the basic airframe. Further items were carefully detailed so that even a complete novice to electric (possibly even to aeromodelling) would know what to buy.

First, I set about reading the hand-book and checking (but not carefully enough) the kit contents against the check lists. Essential really but you can still come unstuck as I'll explain in due course. The handbook included many expert tips which I gratefully added to my experience data bank. So, well done Great Planes.

Tail feathers: A good place to start, and I had remembered to 'reverse roll' the plan sheets a day or two earlier so they would lay flat. I am not a fast builder and it took me about 6 hours to build tailplane, elevator, fin and rudder. A little care was needed with the 3/16 die cut balsa parts, for example E4 and S3 are very similar and easily confused. The 3/16 square balsa for ribs was a bit brittle, but otherwise there were no problems. I replaced it from my balsa reserves.

I said earlier that it was important to read the hand-book before building. Had I followed my own advice more carefully, I wouldn't have made the next silly mistake. The designers had provided an unusual medium for fixing the wing-struts to wing and fuselage (obviously to come later in the building program). This was a tough but flexible plastic which would allow the struts to lay flat against the wing in transit. However, yours truly had missed this in his read through and assumed it was a generous piece of mylar hinge material; he then proceeded to cut this up into hinge size pieces for attaching elevator and rudder with some more cut up for aileron hinges. So when the time came to fix wing struts, there was no plastic left and I had to use light alloy sheet. The moral here is that Great Planes have thought it all out for you, so enjoy the ride!

Wings: Again, so straightforward. The instructions were superb. The wings went together very easily with ribs slotted into the pre-shaped leading edge and trailing edge. I used a sheet of 1/2 inch balsa which I happened to have handy to butt up against the trailing edge while the glue hardened to help keep TE perfectly straight. Although I am tempted to use cyano glues these days for speed of building, I instead decided to use aliphatic glue throughout on the Cub wings. It is often helpful to have the extra time given by a slower glue to get alignment absolutely perfect. A little careful sanding of ribs W1 was all that was needed to get a really good wing join. For me the wings took two working days including the aileron servo and linkage but excluding aileron fitting and covering. The wing assembly was remarkably light..." 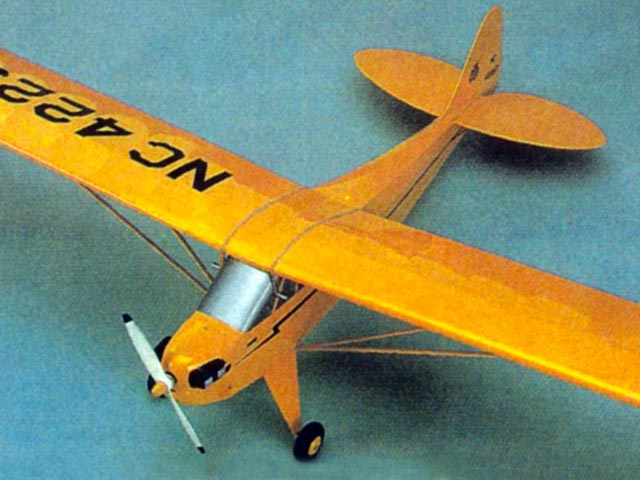 Thanks JJ - I've been looking for this one for years!
RMC - 23/12/2020
The article is for the later version of the model with a bolt-down aileron wing, the plan being the rudder/elevator, rubber banded version. Of course, there is much that is common to both models...
RMC - 13/01/2021
Add a comment