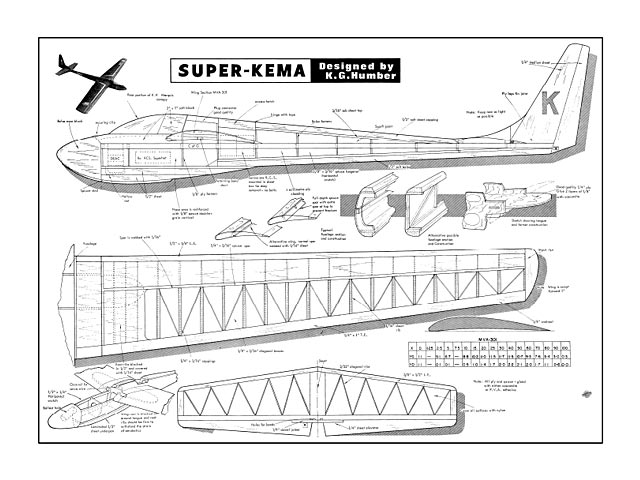 Slope soaring is one of the most fascinating sides of the radio control hobby. Solent Heights MFC members have been flying multi soarers for 5 years. Here is some of the experience they have gathered including a successful soarer in plan form.

SOLENT HEIGHTS have been flying multi soarers for five years or more, during which time we have gained some very definite ideas about the sport. Some are simple, and some may appear a bit unconventional, but they do work - or at least for us they do.

Constructionally, we have tried all sorts, including hollow log balsa, balsa sheet covered, glass fibre and 1 mm. ply covered spruce longeron structures. Finally we have settled for the ply covered job, as this has proved to be light, strong, and relatively easy to construct. We use a balsa underpan to take the shock load (those hill-sides are very hard). For a streamlined fuselage we used a horizontal crutch (spruce 1/4 x 3/8 usually for a 90 in span model), ply and balsa eliptical formers with tops and bottoms cropped. These are framed up with 1/4 or 3/16 sheet soft balsa, skinned with ply and Len capped with soft 1/2 in balsa. (Put the 1/2 in sheet on after the skinning process, this makes for an easier and better job).

Wings are either tongued or banded on the top of the fuselage. We use either a full depth spruce spar or 1/4 x 3/16 top and bottom, webbed with light 1/16 sheet. If a full depth spruce spar is used it is necessary to put a light section pruce spar along the top to stop the spar from breaking on the halvings. Ribs are 3/32 or 1/16, capped and leading edge sheeted; also of course, nylon covered so I suggest you put the wife or girlfriend to work on this.

Design-wise, we have finalised on a fairly conventional layout. There are various re-arrangements of the layout flying in the club and my Super Kema 90 is one of them. This uses the MVA.301 section on the wing, matched to a thin Clark Y on the tailplane. This is as near an all rounder as I have achieved. I do not really consider it possible to produce a model to fly all the various wind conditions perfectly. The Super Kema is really a good moderate weather aeroplane, but, weighted up, it handles the wind fairly well as was proved at last year's Ivinghoe Beacon meeting. The wind blew very hard but I managed 1st place in multi.

Super Kema is a good acrobatic model. Sometimes too good, as I have known it to be so stalled in a spin as to recover under the ground and not in the air! We have tried some of the German soarers which have proved to be good aeroplanes. However I conclude that weather conditions in Germany must be better than ours.

Polystyrene fuselages are not very much appreciated among Solent Heights club members since this form of construction unfortunately does not stand up to usual wear and tear.

Super Kema flying weight is around 4-1/4 lb and this is normal for a 90 inch model, with all radio aboard. In really windy weather she will take anything up to 8 oz extra lead ballast. This will entail a certain amount of up elevator pulsing, but for point to point competition flying the old thing really moves in this trim.

Incidentally, since there has been so much talk about flying in company with birds lately, I would like to relate an experience of my own. My model was buzzed by a hawk last summer. Our feathered friend came out of nowhere and he would not give up. I tried all the tricks I new to shake him off, but he was quicker in the turn than the old Kema. This lasted for quite 5 minutes. The bird would dive on the model and miss by about 5 feet. In the end my nerve gave up and I had to spin the model down to land, while our feathered friend flew off undoubtedly saying that he had shown that big bird a thing or two.

We now use only 4 channel radio for rudder and elevator. Trim is not used since it is considered to be rather a lot of work and expense for the improvement it provides. We find it possible to trim for prevailing conditions on the ground, or at the most with one short trimming hop. Then any necessary under elevation is achieved by pulsing down elevator. Proportional R/C we have not tried, but having seen it in action at the various rallies I would think that for point to point soaring, it will provide a definite advantage, although it will not necessarily have the advantage over a well trimmed reed model. Most certainly though, it is smoother, but whether the cost is justified for slope soaring, is a question to which I do not yet know the answer. I do however, like the fact that it is possible to alter flying trim in the air, without the complications of reed trim gear. Even so though, it is awfully expensive!

All members of Solent Height MFC use Superhet reed equipment. We fly as many as six models in the air at once, and believe me, this can be very hectic at times, especially when the lift is light. Mid-air collisions have occured several times. I recall the second time out with a new SB7. It was climbing quite nicely, when a Mini-Kema came out of nowhere fast and took the fin off my model. The SB7 spun back down (lack of flyable tail area) to hit a fence, which took the wing off just outside the tongue. Simultaneously, the Kema spun, recovered and continued flying, having incurred little damage.

I must mention that we have tried ailerons on sailplanes with surprisingly little success. The problem is the necessity for either a one piece wing or a complex knock off arrangement. I tried a one piece wing on a Mini Kema (oz10019). The model would aileron turn into wind but was hopeless down wind. The first attempted turn down wind ended 10 feet up in a black thorn hedge (very prickly). Another member tried the knock-off wing system with complicated arrangement of spring and rubber bands, but found that trim changed every time the model was re-assembled. He also could not achieve a turn down wind so next time out, ailerons were doped up and that was that.

It proved to us that a multi-soarer will fly 100 per cent satisfactorily on four channels. Six channels are a luxury and any more are just not necessary. So slope soaring is the cheapest form of multi flying - no fuel bills, no noise - except servos running - and really relaxing once you have climbed the hill! But it is also skilful and exciting. We like the mornings when the wind is light and lift is marginal with the odd thermal rising at about 25 minute intervals. Several models circle in the thermal, then trying to hang on to what height has been gained until the next thermal is found. The doubt is always there. To remain aloft in these conditions requires as gentle a touch as possible. Sharp turns cost hard gained height, and a single mistake can spoil the flight.

The other extreme is a howling south west gale, requiring plenty of lead in the model, which is launched well down the hill. Ride it out with down elevator pulsing and the model will rocket up to 300 or 400 feet above the hill. (This is for a 600 ft hill above sea level). Spin, or consecutive loop the model down and out again (always plenty of variety in this game). Flying in these conditions requires considerable skill, particularly if the model rides back near the crest of the hill.

Normal landing procedure is a turn back over the hill and round into wind (fishtail), so that the model settles easily at your feet (or at least it should do). As an example of how not to do it - one day my Super Kema came so close, the wing tip hit me on the chin knocking off the wing and nearly KO'ing me.

We have also tried several scale soarers, the most successful of which has been the old APS Celestial Horseman (oz8643), enlarged to 11-1/2 ft span, with our own simplified construction. Two have appeared in the club, and a really pretty sight they are, soaring along the ridge on a light wind. Barry Evans' version uses a spruce planked fuselage, mine has a 1 mm ply covered fuselage and used 6 channels. My next choice will be a 90 inch Standard Austria, but I am interested to see how the Vee-tail will work out." 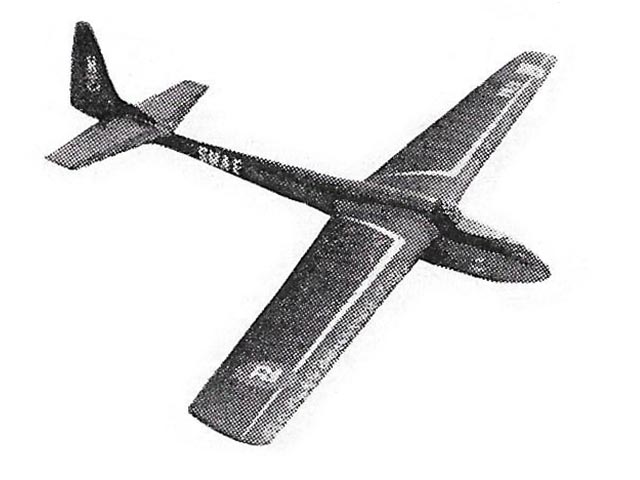