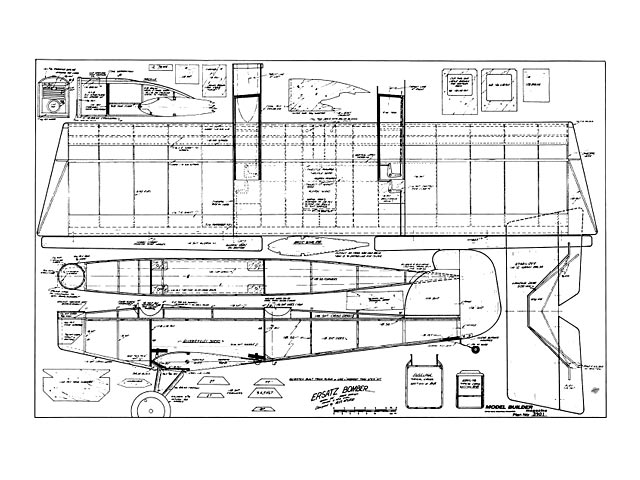 Quote: "Here is a might-have-been airplane built from a Midwest Twin Stick kit or scratch built from these plans. It's as stuntable as any pattern design. If you have ever been to the Paul E. Garber facility at Silver Hill in Maryland, you will be greatly impressed by the German Arado Ar 234, which they are restoring there. Frank Rabbit, a very informed guide, impressed upon us the fact that many German technical advances of World War II were far ahead of the Allies, but were too late or lacked strategic materials for large scale production.

The Ar 234 wasn't the only advanced bomber that Germany produced. Back in 1924, when there was a ban on German development of military aircraft, they produced proposed bombers in miniature and made adaptations from existing materials. The Ju-37, Junkers Juwel, was one such proposed aircraft, would you believe, built as a radio controlled model for practical test purposes. (They even used proportional radios like ours today.) The Ju-37 was to be the gem in the crown of the Luftwaffe bomber fleet. Hence their name Juwel (translation Jewel). The miniature test vehicle was never put into production but superseded by more recent aircraft of the 1930s. I wonder if the R/C model was captured by the U.S. Axis Aircraft Recovery team in 1945 and stored with other flying treasures at the Silver Hill facility?

One of the strangest things is that the Ju-37 looks just like a converted Midwest Twin Stick. These kits, like the Ju-37, are not now in production. If you have the Twin Stick kit, then modify it according to the plans. If you don't, then scratch build the whole thing as shown. I hope you believe my story.

This Ersatz (artificial) Bomber was my way of making the Twin Stick kit look like a possible real airplane of the 1920s. The unfortunate fact that the kit is not now produced is really too bad. It is one of the nicest flying twins I have ever built, with pattern ship capabilities and single engine survival. Ed Rogala, of Midwest, confirmed that production of the kit ceased over three years ago, but gave his blessing to this article. if you don't have a kit. then go right ahead and build the little bomber from scratch, since I'll describe construction as if it were not a kit. Please do not feel that the fuselage and rudder shapes need to be exactly as in the plan. Change it to suit your taste. Make it a French, Russian, or Japanese. or any obscure looking bomber. People will say: Oh yeah! I recognize that one from the books, I just can't remember the exact name.

If you've built any other Ugly Sticks you'll realize how acrobatic they are. This one is no exception. Even though it looks like it should fly slowly and awkwardly, it doesn't. It's truly a 'Ringer.' The K&B Sportster 20s are good, steady, reliable, quiet power, right out of the box. I can't say enough in favor of them; besides, they're inexpensive. So here is your chance to build a twin for the price of a single engine airplane and keep the cost of the airplane, including engines, below $125.00.

CONSTRUCTION: If you're working from the kit be sure to modify it as you go along. The main thing about it is that the fuselage sides are turned upside down, changing it from a high wing plane to a low wing one.

FUSELAGE: Begin with the fuselage sides and cut them from two sheets of very firm 1/8 x 4 x 36 balsa. Use some scrap cut from them to extend the sides down as shown at the leading edge of the wing. Remember, in a twin the fuselage doesn't carry as much as in a single engine aircraft; ie motors, landing gears, etc, so our model doesn't need heavy doublers here just what is shown on the plan. Eighth-inch square balsa is used at the edges of the sides both to increase gluing surface and to allow us to round the corners. Cut out former 1B from 1/8 sheet and 38 and 6B from 1/8 lite ply. Glue 3B and 6B, perpendicular to the right side in the indicated place. Then glue the left side to 3B and 68 being sure that the edges of the sides are parallel.

Join the rear of the sheets together at the tail and glue in 18 to bring the nose slightly together. The 3/16 sheet saddles can now be glued in, along with the top and bottom cross pieces and 1/8 sheet at former 2B. It's a good time now to install the control rods in the fuselage and support them at every station. They exit the fuselage sides under the stabilizer. Sheet the top of the fuselage with cross-grained medium soft 1/8 sheet and do the same with the bottom rear. Use 1/4 sheet on the bottom of the fuselage in front of the wing. Add the 3/8 sheet nose blocks and triangular stock, then extend the top sheeting over this. You now have the basic fuselage..."

Quote: "Hi Mary and Steve, I hope that all is going well with you both... Attached is the article and plans for Alex McLeod’s 'Ersatz Bomber Ju-37'. It was featured in Model Builder, May 1990.
I built this model in 1992 with two Fox .15 engines. Having never flown a twin-engine model, I had our club’s chief instructor perform the maiden flight as well as several shake down trimming flights. He said it was one of the easiest twins to fly. After several training flights on a buddy box, I soloed her. He was right, it was a joy to fly. On the seventh flight, I lost an engine, and I was not fast enough to correct. She turned into a black bag crash.
Many years later, I am currently building a new model using electric power. I have lightened the tail surfaces and lightened the ribs. I’m still a long way from completion. I’ll keep you updated on the build." 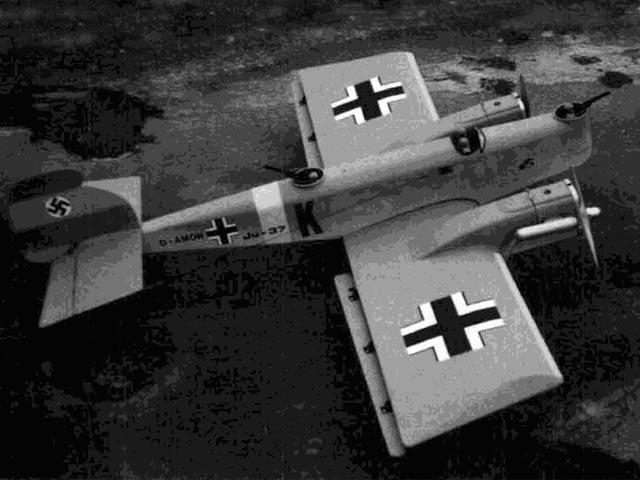