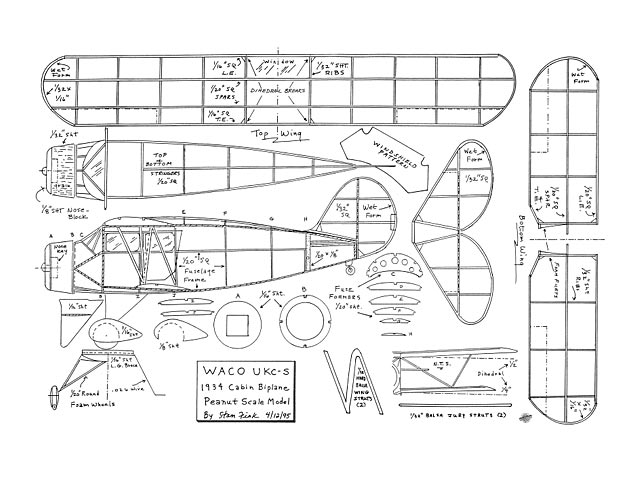 Quote: "Waco UKC-S, by Stan Fink. Something a bit more complicated than the typical Peanut, the UKC-S was one of Waco's classic cabin bipes from the 1930s and makes a great flying model. From a recognized Peanut Scale expert and authority on Waco aircraft.

My love affair with the Weaver Aircraft Company's biplanes began over 20 years ago, when I went to the local hobby shop and bought Model Builder magazine for November, 1973. The centerfold featured Walt Mooney's Peanut plan for the Waco SRE, one of the last planes produced by Waco. The accompanying photos of Walt's red model with black and white trim made the project irresistible! To my surprise, the model flew 'right off the board' with only a small amount of clay added to the nose. enjoyed flying the plane in schoolyards and contests, including the 1977 Nats in Riverside, California. After flying the plane for 13 years, I finally gave it away in 1986 when I moved from the West Coast to Philadelphia.

A few years ago, I started to wonder about other Wacos. in case you're not familiar with Waco model designations, the first letter denotes the engine make; the second, the wing; the third, the fuselage design. A fourth letter denotes 'S' for standard or 'C' for custom cabin. Our model, the UKC-S, was a four-place cabin model with a seven-cylinder Continental R-670 of 210 horsepower. It had a top speed of 142 mph and could fly for four hours without refueling. It was popular with business executives, but because of their expensive purchase price, they were limited to well-to-do individuals.

As a model, the 1934-35 UKC-S has more wing area, a shorter, fatter fuselage, and is a bit more difficult to build than Mooney's SRE. In my opinion, it has more Golden Age appeal too, since the SRE came out in the 1940s and exhibits modern streamlining notably absent from the UKC-S and other Golden Age airplanes.

FUSELAGE: I always build the fuselage first. This one is a basic box with formers top and bottom and one stringer running along each of the four surfaces. Build two sides over the hatched areas on the plan. The cowl will be built separately and attached later onto the triangle at the front of the fuselage. Wet the longerons after they are pinned down; this will prevent warps.

After the two sides are dry, separate them and glue in the crosspieces over the top of the plan. Cut out and glue the formers on the top and bottom, but do not put any stringer notches in them now The formers are drawn slightly oversize, so you will need to trial-fit and sand them slightly. The top stringer will not be installed until the wing is covered and put in place.

Since it will be difficult to make this plane under 10 grams, you need strong landing gear support. Bend .020-.025 mu-sic wire as shown on the plan and CA glue it to former D.

COWL: Making the cowl is not as hard as you might think. It's made separately from the rest of the airplane, so messing it up won't affect anything else - just make another one. First, cut out formers A and B from medium 1/16 sheet. Cut out the rectangular nose plug opening in former A and glue four 1/16 square sticks on the back side to reinforce the opening. Cut out former B but do not hollow it out or make any notches as shown on the plans - this will be done later. Make these formers as round as possible.

Now cut three 1/2-inch long, 3/32 square sticks and glue them on end to the back side of former B near the edges, equally spaced. Now glue former A on top of the three sticks, being careful to center it so the cowling doesn't come out skewed. After the structure is dry, wrap it with soft A grain sheet. Most modelers will prefer to use CA glue for this job.

After sanding the cowling, line it up with the fuselage over the plan and mark and drill two holes near the edges of former B for locating the points of the fuselage. Make sure the cowling lines up before gluing it..." 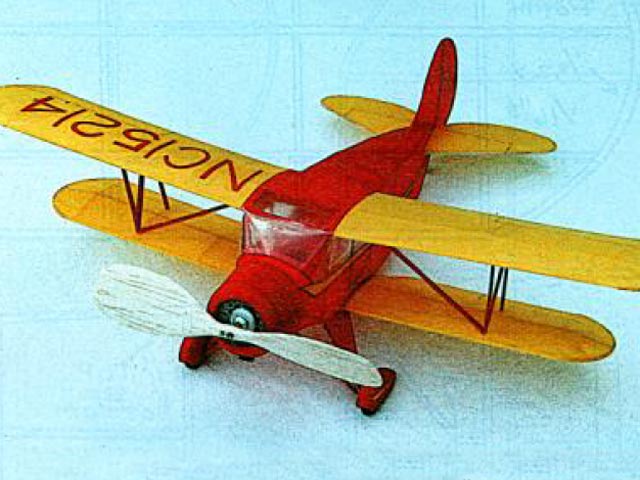