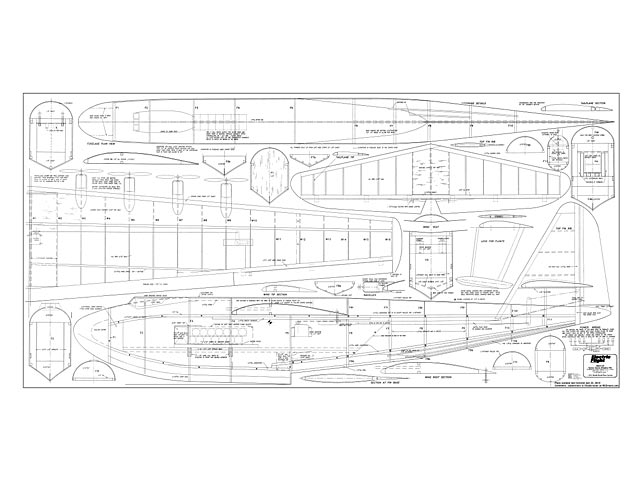 Quote: "An eight-engined scale model that is of simple construction and so easy to fly. Spruce Goose, by Robin Andrew.

Why? Robin Andrew loves to build and fly something different. Regular readers will have seen in the four and a half years during which this magazine has been published, several scale models of his, often of unusual original subjects. Robin is a quick builder: he uses a very similar construction technique whatever the subject and he does not get bogged down with a lot of intricate scale detail - he would rather be out there flying. He builds several 'stand-off scale' models each year and for the past two years has been fascinated by multis. He has build fours, sixes and this eight, all powered by Speed 400. Robin saw the report by Martin Lagerstedt in the March/April issue of Electric Flight International of the Hughes that he and his father Christer had designed and built and upon learning that there was no plan available, was inspired to design his own.

The Real One: The real Spruce Goose like so many big military projects was not needed by the time it was finished, or in this case, not needed long before it was finished. In 1942, Allied shipping in the North Atlantic was at the mercy of Axis U-boats and shipping magnate Henry Kaiser persuaded the USA government to finance the construction of a fleet of giant flying boats for patrol work and long range transport. In order to not deplete materials the entire construction was require to use no 'strategic materials'. In 1942 this was aluminium and at that date the only alternative was wood.

In 1944 the project was cancelled, the requirement was no longer there, the US government cancelled the fleet, but would take delivery of the one part built 'HK-I' in 1948. The original $18 million for three had already been spent so Howard Hughes spent $7 million of his own to complete the one airplane in 1946. Hughes H-4 Hercules was the official title but its construction of mostly birch and some spruce gained it the nickname 'Spruce Goose'.

It used eight of the most powerful engines available, 3000HP Pratt & Whitney R4360s, and these were probably not big enough. This aircraft was and is the largest the world had ever seen. The wingspan of 320' (98m) is 50% larger than a Boeing 747.

Hughes was determined to prove it could fly and on November 2, 1947, with a small crew and 30 reporters aboard he started the engines in order to conduct same taxi trials around Long Beach Harbor. He tater dropped off these reporters, telling them that the first flight was scheduled for 1948 and he needed to conduct one more taxi trial. No-one will ever know what Howard Hughes' true intentions were but with himself at the con-trols during this next 'taxi trial' Hughes instructed co-pilot Dave Grant to lower the flaps and the H-4 became airborne, lifted 70 feet above the water, flew over one mile, achieved a top speed of 80mph and made a perfect landing after less than one minute. It must have been an absolutely incredible sight! Hughes had proved that it could fly.

The H-4 was then parked in its climate controlled hanger for more than forty years. Starting in 1992 it was disassembled into 38 sections for removal to its present location at the Evergreen Air Venture Museum, McMinnville, Oregon. USA. This magnificent flying boat is typical of the courage and determination of Howard Hughes, of the conventional establishment opposition to achievement of any novel idea and a super example of what dedication can achieve.

The Model: I designed and built this Spruce Goose in the spring of 1997 and flew it at several competitions. I drew it from a three view silhouette and only had black and white photographs of the full sire on the water so I always felt that it might only be near scale. A big vote of thanks to my friend Dick Comber who supplied accurate drawings allowed me to correct the fin top and tailplane tips and the upward slant of the rear fuselage in order to be nearer scale. As it stands any loss of scale is in the interests of lightening it and reducing the construction time.

Building: I always start on the rear 1/4 sq (6.4mrn) longerons and uprights, thus making two sides and placing them upright and joining them at the tail. Using the top view add in the cross pieces and add the plate with a hole in it for the fin LE to go through.

Now cut out the top two sides and then the bottom two sides from 3/32 (2.4mm) hard sheet. Glue them together and add on the 1/2 x 1/8 (13 x 3.2mm) doubler strip making sure it's on the inside. Leave to dry and start cutting strips out 3/4 x 1/8 (19 x 3.2mm) sheet to make formers. Measure each former to get the length and construct them noting that the top formers slot in between the uprights and the bottom cross strips glue across the back of the of the uprights. The keel formers can now be slotted in like the top ones. When all the front formers are built it is now possible to add the bottom 1/4 sq hull longerons and the top longeron of the rear previously constructed stick fuselage onto the front assembly, not forgetting the 1/4 spruce doubler underneath. When dry add in a few cross strips of 1/4 sq between the top longerons to stiffen the formers and their glue joints..." 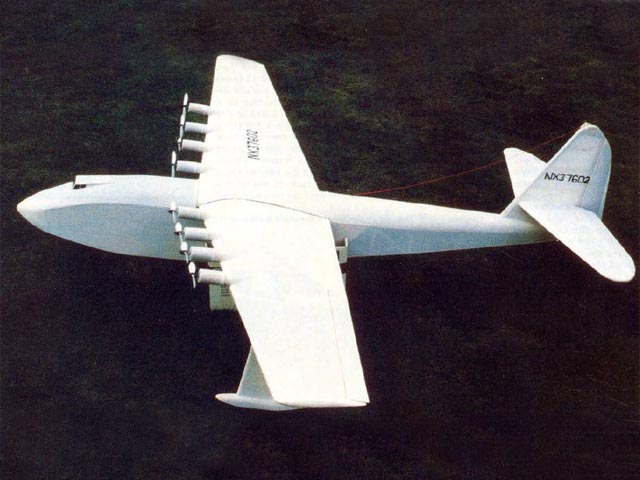 That last photo in the article made my eyeballs go past my spectacles! Who made that equipment, Massey Ferguson, Caterpillar, Uncle Tom's Wood Cabins? :-)
Miguel - 19/12/2020
Add a comment