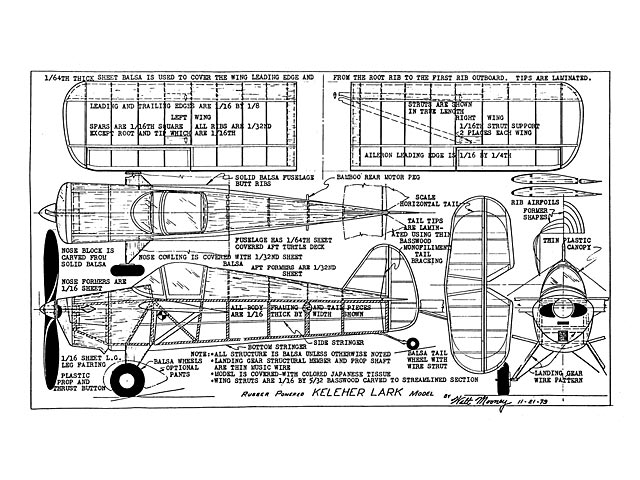 Quote: "Our Peanut Perfesser is at it again, bringing us a neat little single-seat lightplane that has proven to be a fine flier. Only minor mods from full scale required. Keleher Lark, by Walt Mooney.

This little model is a very stable flyer and an interesting configuration. It is a little more complex than the simplest of the Peanut scale designs, but should not present any constructional problems to anyone who has built a couple of Peanuts before.

The original airplane is a single place, strut-braced, shoulder wing, fabric covered lightplane. It has conventional wing and tail structure and is a 'tail-dragger', that is, it has two main wheels and a tail wheel. The airfoil used has a slight reflex, the wings are braced with 'V' struts, and the tail is wire braced. The model is built with scale rib spacing and deviations from true scale are limited to an increase in horizontal tail size, increased dihedral angle. and a larger than scale propeller.

The drawing shows separate control surfaces, that is. the elevators, ailerons, and rudder are shown as separate entities. It is easier to build them as an integral part of the horizontal tail, wings, and vertical tail respectively, with the intention of separating them after assembly, especially with respect to the laminated tips which look so much better than sliced sheet balsa tips. Readers may note however, that while the model in the photos was built according to the plan, the surfaces were not separated. This is a lazy decision of the author justified by a wish for more consistent control adjustments (commonly known as 'none').

The model in the photos weighs 17 grams with a 19 inch loop of 3/32 rubber, and will average about 27 seconds with a Peck-Polymers 4-3/4 inch diameter propeller. It is a very stable, easy-to-trim model, and required only a piece of 1/16 balsa as a downthrust adjustment to eliminate a slight tendency to stall under the initial high power.

All the model structure is conventional practice for scale rubber powered airplanes, except that some of the techniques are more commonly seen on larger models than Peanuts. The laminated tip outlines are one example. Tip material is 1/64 by 1/16 basswood. Three laminations are used for the tail surfaces and four are used for the wing tips. Most people using this approach seem to make a sheet pattern to wrap the strips around to obtain the correct curvature. The advent of modern cyanoacrylate adhesives like 'Hot Stuff', 'Zap', Jet', etc., make this effort much quicker and somewhat simpler. Instead of making a form, just cover the plan with waxed paper on your workboa rd. Then make a row of straight pins along the inside of the outline with the pins about 3/16 of an inch apart. Take three strips of wood and pin them in place against one end of the row of pins. Then carefully wrap the strips around the pin row and pin it in place at the other end of the row and wherever such pinning appears necessary along the row. Now take the instant adhesive applicator and bond the laminations together. In another 10 or 20 seconds the tips can be removed and used in the surface assembly. It works great and surely gets accomplished in a hurry.

The wings and tail surfaces are constructed directly over the plans. Use 1/16 sheet for the root ribs and 1/32 for all the other ribs. The spars are 1/16 square, both on the wing and on the tail surfaces. The top of the leading edge of the wing, and between the root and first rib, is covered with 1/64 sheet. If you find this hard to obtain ready-made, carefully sand some 1/32 sheet to about half thickness.

The fuselage is constructed as a conventional stick framed box, topped with sheet formers and sheet balsa turtle deck and engine cowl areas. It has a single stringer on each side and on the bottom. The stringers are about 1/8th wide at the front and taper to almost nothing at the aft end, as shown in the top and the side view of the fuselage. Solid balsa butt ribs are also added to the fuselage structure. A small area of the side cowling panel must be removed to accept the forward end of the butt ribs.

The landing gear wire is strictly conventional. The landing gear leg fairing is simulated by a 1/16 th sheet triangle. It is rounded on its leading and trailing edge, not streamlined. A small piece of plastic tubing is slit for half of its length and slipped over the bottom of the wire to simulate the stub axle and thin wire simulates the diagonal landing gear brace, the lower end slipping into the end of the stub axle.

The windshield and canopy is made from thin clear plastic. It has compound curvature, so a form needs to be carved so it can be heat formed. The old Mattel Vacuform toy made the one on the model in the photos. If this will give you trouble, it is obvious that the Lark could be flown without the canopy, and the windshield alone has only simple curvature.

Cover your model with your favorite material. The one in the photos was covered all over with yellow Japanese tissue. After water shrinking and two coats of thin dope, the red Japanese tissue color trim and registration numbers were added. The first comment of my favorite model photographer, Fudo Takagi, on seeing the model was, 'Ah, the rising sun!'

Have a lark with your Keleher Lark." 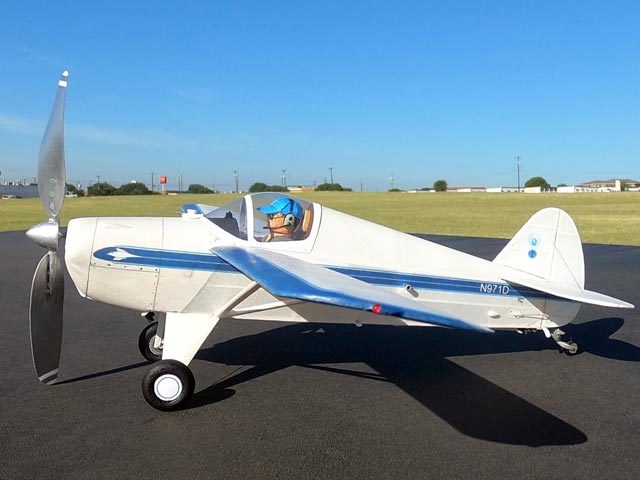 Here's a couple photos of the peanut scale Keleher Lark I built last year [main pic, 003-008] as part of the HipPocket Aeronautics Walt Mooney quarantine cookup. It was a fun build. I got in touch with the owner of the aircraft I wanted to model - he was very helpful with photos and reference information for the build and the personal contact made the build even more entertaining. Trimming has been touchy, but it's done some fairly satisfying flights - video at: https://www.youtube.com/watch?v=d9o3yVcVwQ4&t=272s
Thanks again for all you do to keep these plans available!
Mike Kelly - 19/12/2020
Outstanding. That's beautiful work.
SteveWMD - 19/12/2020
Beauty! Hard to believe it's a 13" peanut.
Dave F.
Dave - 19/12/2020
What a pretty sight! Underneath the airframe is beautifully finished, the colour scheme chosen is uncluttered and tasteful, and the trimming is masterfully done - a few notes on how this was done for us poor mortals would be welcome!
What about details? The Venturi pipe on starboard, the tailwheel assembly, the guy inside, the rudder actuator rod, the EAA decal (I think it is), the stabiliser bracing, the... In a word, fantastic!
Miguel - 19/12/2020
Thanks Miguel - the framework is essentially per the plan, with the sheeting lightly coated with sanding sealer and sanded smooth before covering. The markings were printed on white Esaki, then the tissue was chalked with PanPastel white artist's chalk powder before application.
Mike Kelly - 21/12/2020
I see, the post-printing powdering softened the contrast. Thank you, Mike, and a Merry Christmas :-)
Miguel - 22/12/2020
Add a comment