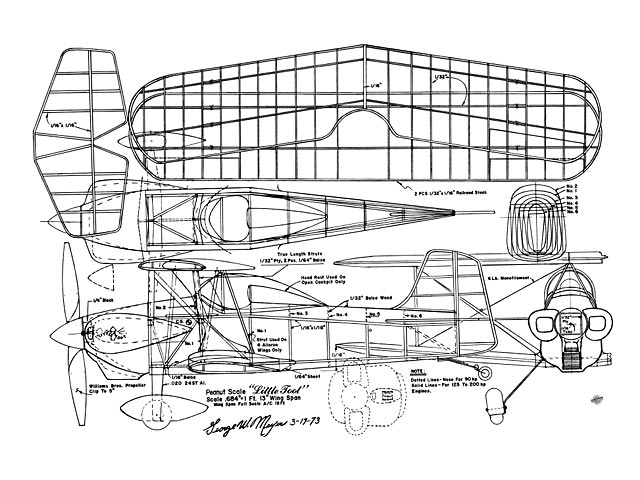 Quote: "This is really getting it directly from the horse's mouth! Who could be a better authority on the scale accuracy of a model than the designer of the original full size aircraft? Model 'Toot' meets Peanut rules, and features same rib spacing, etc as the full scale ship. Three-views on page 28. Little Toot, by George Meyer.

This is an accurate peanut scale model of Little Toot with all rib spacing, etc., the same as my full scale aircraft. Weight can be cut and flying improved by eliminating half of the ribs and fuselage bulkheads and substituting 1/16 x 1/32 stringers from back of the cockpit to the tail post, spacing them approximately 1/4 inch apart, tapering the spacing to the tail post. This will still be accurate scale since the full scale Little Toot can be built with a metal monocoque or tube and stringer construction. In fact, most of the full scale aircraft are of the tube and stringer type.

My model is powered with an old Buzz CO2 engine I have had for many years. The Brown CO2 is the same size and can be used, or 4 strands of 3/32 rubber as shown on the plans. The only deviation from scale is in the tail surfaces, which had a symmetrical airfoil on the full scale, but I built the model surfaces of flat 1/16 thick, which is more common for peanut scale models.

The model is built in the conventional manner, with a box made of light 1/16 square balsa; the bulkheads added and then covered with light weight 1/32 balsa sheet. Give the 1/32 sheet a thinned (50-50) coat of dope on the inside to keep it from getting bony after the covering is installed.

The plans show two types of engine cowling. The solid lines are to the scale of the big aircraft using the 125 to 200 hp engine as now installed on the full scale ship. The dotted lines are of the original 90 hp version and Arlo Schroeders Hawk Pshaw (the most beautiful Little Toot built so far). There are also two cockpit types shown..." 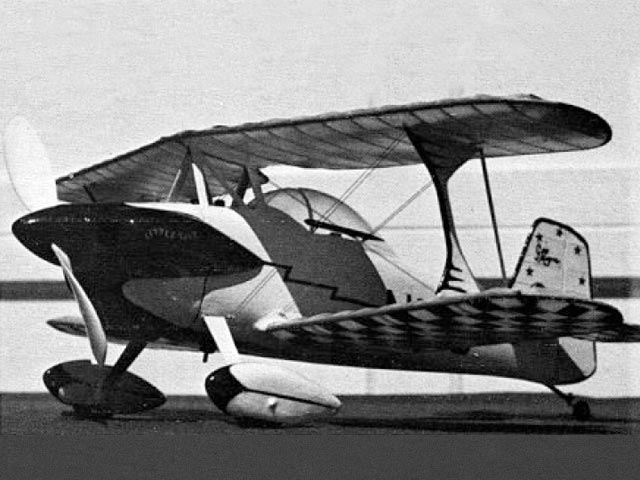 Designing and building the full-scale and the model is the best of both worlds, but this tale did not end here: George Meyer went on to make at least a second model, this time a 48" - a beefy engine recommended for CG reasons - to be found in Model Builder 1974-02 and awaiting for the skilled plan restorer :-) The article alludes to a 1/4th scale plan but I found no trace of it. While speaking of skilled restorers, the present offering was done by one member of that select club.
Miguel - 16/12/2020
Tommy Meyer (George's son) still handles the Little Toot support. They have 1/3 and 1/4 scale model plans offered on the company website at this link: https://www.littletootbiplane.com/shop-toys.html
Dave D - 17/12/2020
Add a comment