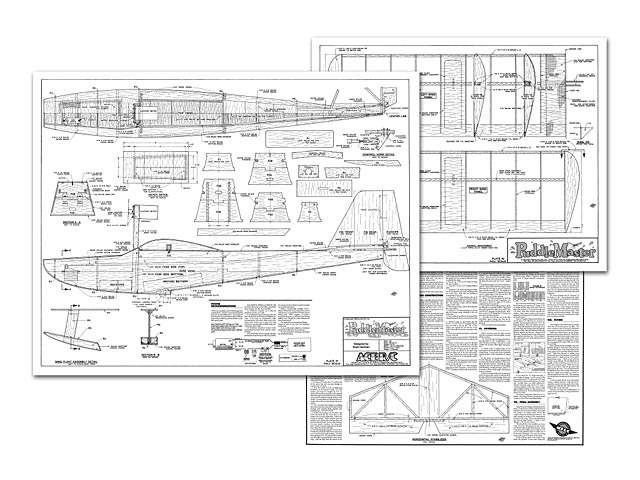 Quote: "You are about to embark on a unique R/C modeling experience! The PuddleMaster will provide remarkable performance on a common 'can' type 05 electric motor and 6 or 7 cells. We have several motor/battery/ prop recommendations for good performance. Refer to the plans for details.

An electric R/ C seaplane has much appeal. Its ability to fly off of a small pond in silence makes it a plane that can be flown just about anywhere at anytime. The PuddleMaster comes up on step almost immediately and is airborne shortly thereafter; it flies in a relaxed manner yet doesn't 'wallow' around like some electrics.

One of the secrets of this plane's performance is its light weight construction. Don't add weight by using excess glue; we recommend construction using thin and medium CyA glue entirely; stay away from heavy epoxy. To construct the PuddleMaster, you will need a flat work surface at least 2 x 3 ft and common modeling tools.

We would suggest going ahead and punching out all the die cut parts. Carefully remove all the notches from the fuselage side parts and the ribs; clean up any frayed edges with a sanding block. You will be able to identify all the parts by referring to the plans; it would be wise to label them with a soft pencil.

You will find the PuddleMaster's simple construction will build quickly and accurately. We have provided step-by-step instructions to guide you.

[ ] Test fit the fuselage side top and bottom parts; block sand if needed for a good fit.
[ ] On a flat surface covered with waxed paper, make two fuselage sides by carefully gluing the tops to the bottoms.
[ ] Drill 3/16 holes for the wing hold down dowel into each fuselage side where indicated by the 'tic' marks.
[ ] Lay both fuselage sides down on a flat surface; position them so both front edges are either to the right or the left and the top edges of each side are facing one another; this way, when you glue the wing saddle doublers in place, you will be making a right and a left side.
[ ] Glue a wing saddle doubler on the inside surface of the tops of both fuselage sides, being sure you make a left and right fuselage side. After the glue has set, drill the 3/16 dowel holes in the doublers, using the holes you already drilled in the sides as a guide.

[ ] Cut a piece of scrap balsa from the excess die cut wood, 3/32 x 1/2 X 3/4 in. Glue this Tail Post to the inside rear of one of the fuselage sides.
[ ] Test fit the top and bottom halves of the two-part formers (F2A/B, F3A/B, and F4A/B), trimming if needed. On a flat surface covered with waxed paper, glue the two-part formers together.
[ ] Drill two 3/16 holes in F5 where indicated by the 'tic' marks.
[ ] On each of the formers, use a pencil to mark a vertical center line, centered from left to right. Use a triangle to draw a vertical center line on each of the formers..."

Note as supplied in the kit the original papers plan showed the fuselage (sheet #1) at 3/4 scale. This has been scaled up to full size.

Well, just what is a Puddlemaster? Ace R/C have long made kits in America - their Seamaster 40 (oz10212) and Seamaster 120 (oz10817) are popular flying boats at both sizes - and 'Ace' designer Scott Hartman crossed the Seamaster with an '05' electric package for Puddlemaster, an easy building, lightweight electric flying boat.

In the box is plenty of quality wood and one of the best hardware packages I've come across. Three rolled sheets - two plans, one of logical instructions with tick boxes alongside each step - help you turn the bits into your Puddlemaster. I followed them, too, just for a change! Afterwards, a smart decal set will leave no doubt as to what your new model is called.

The wing: This has one spar, a spruce/balsa/spruce sandwich, fitted from the bottom of a flat bottomed section. It's a light wing with minimal sheeting - centre section and one bay each side to take the floats. The tips are triangular block - pleasant looking and efficient.

The wing builds fast and easy. If you're a purebred R/C modeller this could be the closest you come to building a free flight structure. If you build free fighters, you'll be happy here. 1/16 ply dihedral braces either side of the spar join the wings, aided by the supplied 4 inch fabric bandage - Ace call it 'polymat' - over the centre section sheeting. When cyano'd in place, it had a rough surface - a few coats of sanding sealer solved that.

Hull: The Puddlemaster sports a cunningly shaped flat bottomed hull, very light as befits all electrics; Scott knows much about getting the most from a structure. The sides don't match the fuselage plan - hardly surprising as the plan is 3/4 full-size (where's my Graupner Speed 400?), but accurate diecutting means assembly is no problem.

The sides and formers are made from top and bottom halves that are glued together - cheaper and more flexible for manufacture. The formers have their grain running side to side which is far stronger than vertical grain.

The fuselage tapers from bottom to top in cross section; this is harder to keep square than a rectangular section and left me wishing I'd assembled the fuselage jig I've had for ages.

Unlike kits that toss in a few hints on R/C gear at the end, here the subject is covered as you go along. For example, you're halfway through the fuselage when you're told to fit the snakes. There's plenty of R/C gear space in the bows, Ace recommend a non-battery eliminator circuit set-up so that you've a drop of energy left for a taxi back if you overrun your flight power. With a BEC, you could find yourself up a creek without a paddle, so to speak.

As servo loads are low and there are no bad vibes from a 600, I used a brace of Futaba S133 micro servos to drive the controls and a Futaba 114 speed control. Yes, okay, that is a BEC unit. Must watch my watch!

While cogitating on where to put the radio gear switch - missing from the instructions - I wrote to Ace RC - who wrote back with a couple of suggestions. They suggested that, if the switch faces the outside world, a waterproof one mounted high up was a good idea! The speed of reply was admirable. If you write to American manufactures, don't forget return postage - an SAE is good manners over there and pretty much guarantees a reply.

At the stern: At the back comes a tailplane built from 1/4 in square, with fin and moveables of light sheet. Interestingly, the Puddlemaster first appeared as a magazine plan with all sheet tailplane. When Ace kitted her, it acquired the strip units. I wasn't keen on just gluing the 3/32 fin to the tailplane, so I added 1/4 in triangular braces.

Making a splash: The hull design looks good for water ops, with a flat, wide bottom and a well sited 'step'. To improve her balance, floats are fitted to a sheet panel let into the wing underside. Now, Ace appreciate you might not have water, water, everywhere - but even landlubbers can find grass! If stuck with tarmac, fitting a set of wheels is covered, though the few parts needed aren't supplied for this. So the instructions detail removable floats using Velcro-type fasteners.

The floats are easily built, though I'd have preferred a full-sized drawing, rather than the 75% one. Each float comprises four ribs, a flat, die-cut top and cross grained bottom. I'd advise pinning the ribs together and sanding to ensure they are all identical.

When I covered the wings, I treated the float mount areas with Balsaloc and left the balsa uncovered where I fitted the Velcro. Contact adhesive doesn't stay on film long! When you want to water fly, press-fit the floats. For grass field ops, off with the floats and hand launch.

Engine room:L The Puddlemaster is for 540/600 motors with six or seven cells. The plan lists the power combinations tried, the only 'exotic' being the Astro 05, so a motor and battery pack won't break the bank. I have flown my Puddlemaster on both the West London Models 'Wetmag 20' and a Graupner Speed 600 BB, fed by 6 or 7 cell packs via a Futaba 114 speed controller. As to duration - around 8 minutes without too much fooling around at high power from the 1700 SCR packs. That throttle is really useful, as you don't need full power much.

A speed controller is good for increasing flight times - take off on full power, then reduce power and have extra time aloft. With a switch you're on full throttle all the time, at maximum current draw..." 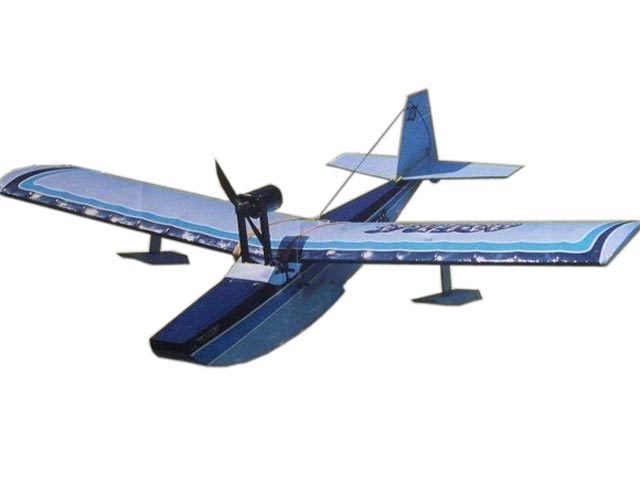