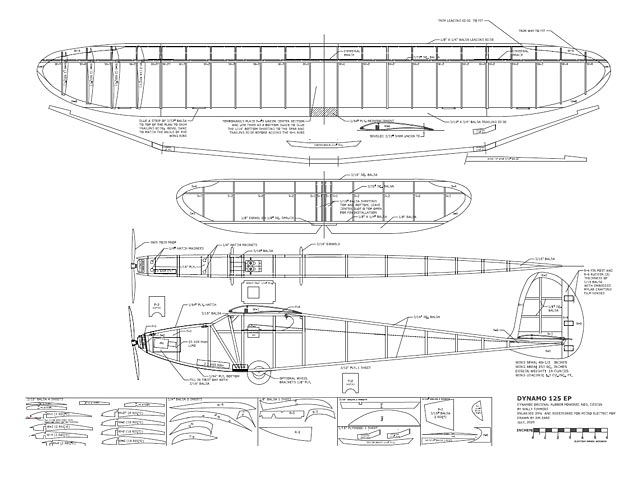 The Wally Simmer's Dyna-Moe (oz6463) was first published by Midwest in 1947. This here is a later version, enlarged by 25% for RC and electric power.

Quote: "Back in June I posted a gallery in RC Groups on an original sized Wally Simmers/ Midwest RC Dynamoe powered by a Eflite Park 180 utilizing a salvaged A3SX receiver from a foamy. That model was a great success and prompted me to think a little bigger. I have used Park 250 motors with 2 cells on a number of small gliders and sport planes. I decided to enlarge the Dynamoe by 25% and use this motor.

I used a scan from Outerzone and created a 125% drawing using AutoCad. I built the first of two 125% Dynamoes in mid-July. I did add one additional bay to each wing half for a wingspan of 46-1/2 inches. The model weighed in at 10.2 ounces with 253 sq. inches of area. I covered it with transparent white Ultracote with red leading-edge panels. This proved to be a mistake.

The model was joy to fly. I climbed well on the Park 250 and I was getting flight times of 12 to 15 minutes. On a July 26 I flew a couple of larger gliders in a very active thermal setting. I had a couple of flights where I spent most of the time trying to keep the model closer to ground.

When the wind died down and I launched the Dynamoe. It climbed quickly and after several minutes of lift I lost sight of it in the sun. The transparent white covering blended in with the cumulous clouds and I never saw it again. It is in a tree or a corn field. I wanted to build another right away so I tried to order another Park 250. The local Hobby shop was out of stock, so I tried to buy direct from Horizon. They were also out of stock.

I then went to the Innov8tive RC site and found the specs for the Cobra2204/32 motor. I ordered one and started the second Dynamoe 125 as I have dubbed it. I decided to eliminate the side stringers on the second model since they added complexity to covering. It I went together fast and this time I used transparent red on the wing and stab and rudder. Red a very visible to me in any conditions.

The Cobra 2204/32 weighs .79 ounces and has a die cast frame with four mounting brackets. I screwed it to the fireball and connected it to a Cobra 11-amp esc.

The flight times are 20 to 25 minutes with the 450 pack. I typically climb to a few hundred feet and glide back. It is also a lot of fun to cruise in lazy circles at 1/4 throttle. In the free flight mode, the Dynamoe climbs in a gradual left turn and recovers easily when power is shut off." 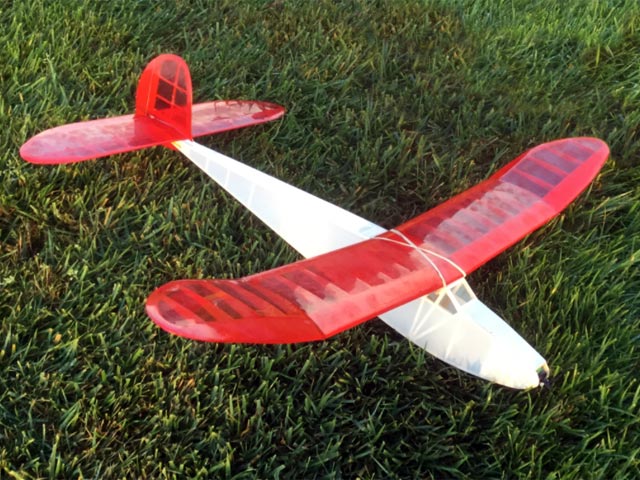