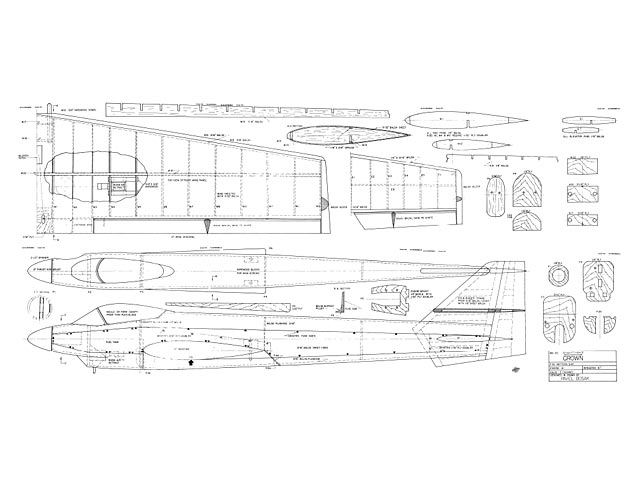 The model aircraft I have designed does not necessarily belong with the models that win medals in the world championships. But it is a model that is built according to my experience in F3A category of FAI competition. It is the latest development in a long series of designs.

I have also experimented with swept wing designs. A swept wing model is more stable in straight flight which is good, but it is also stable crosswise which we do not like in an aerobatic model. In addition to this, when a swept wing model is flown slow it has a tendency to reel about to both sides. For these reasons I have chosen a wing with a slight sweep and a straight trailing edge, and it is easier to assemble the ailerons and torque rods.

The fuselage was shaped from an aesthetic point of view with regards to a pleasing side view. Originally the projection on the front bottom of the fuselage was done so the tank would be in line with the engine, and to have more space for the undercarriage. I have since changed to a, Robart fuel pump, but have left the projection because it looks good. I am sure some model builders will agree with my design ideas and some will argue, but it is my opinion that there is no ideal model for everybody. It can be clearly seen that the best models of the world's best pattern pilots are designed according to their specific demands and this is why they can hardly serve for common-usage, though the exception prove the rule. Who can say that if you build a Curare you will win the world championship, the model does not include Mr Prettner's hands. More important than the well-known model is to build a straight, not twisted model. This is the key to future success.

A few model builders who are not very experienced have built the Crown and all of them are satisfied. The model can be gently controlled, it does not do unexpected turns and it is not too sensitive on the rudder. The Crown will perform the whole set of FAI figures, and I have already done the 1973 set without any problems. That is also a job for the pilot.

There is nothing in the latter set that cannot be done by any model. The flying speed can be increased with the help of a tuned exhaust but it is not necessary as have flown two seasons without one. Again I would like to stress that the model is designed to fly at high speeds, jet like, with long radius turns. In my opinion, a speedy model is easier to control and it can resist cross winds better.

Construction: The Crown RB101 has no special construction problems. It was built by the common method for building all balsa models. We will begin with the wing, which we will need when the fuselage is constructed.

First we must decide what type of undercarriage we intend to use. I have seen a few Crowns without retractable undercarriages and the flying speed seems to be reduced, but this is the only apparent difference. If you decide to use retractable undercarriage as I have drawn on the plans I would suggest Rhomair, as I consider them better than the push rod type. If you intend to use retracts you must make special cuts in ribs W4 and W5. The first step into cut the ribs. I suggest the use of so-called rasp interpolation..." 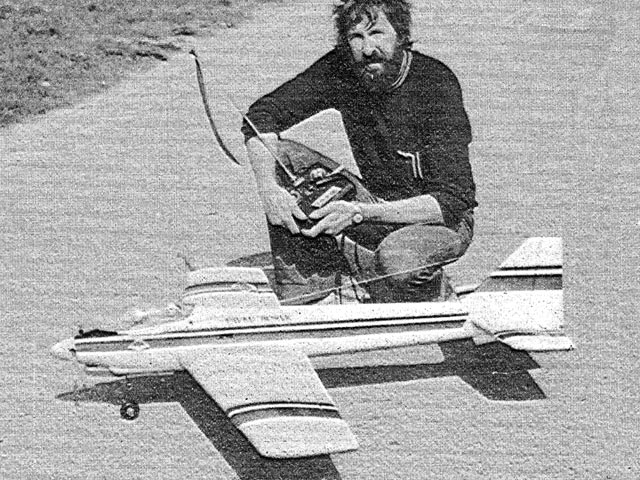