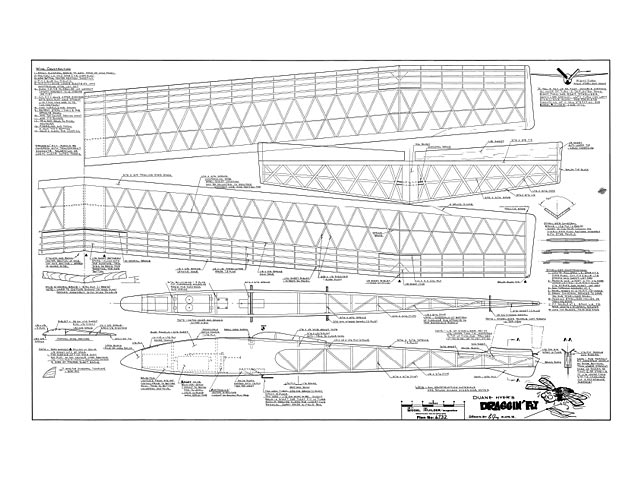 Quote: "As if in purposeful opposition to our R/C Soaring editor's comments this month, our glider designer offers a moderate size lightweight model for lazy soaring among the summer's weakest thermals. Draggin' Fly, by Duane Hyer.

It has been said by a man wiser than most that every job is a self-portrait of the person who did it. Duane Hyer's Draggin' Fly is three-dimensional proof of that statement. The Draggin' Fly obviously is the product of mind and hands dedicated to the task. It is the product of a modeler's modeler - to use an over-used phrase one more time.

Hyer's Draggin' Fly, as a building project, may not appeal to those sportsmen who consider model construction a necessary chore, or to those who judge the merit of a kitted design by its degree of prefabrication. But for the Model Builder, the craftsman who enjoys fine woods, appreciates accurate structures, and recognizes the intrinsic value of workmanship, the Draggin' Fly presents an opportunity not to be long denied.

The Draggin' Fly is a small sailplane by most standards - only seven feet in span and two pounds or so, give or take a couple of ounces, all up weight. Total wing area is a shade under 600 square inches - call it four square feet. Its primary purpose in life is fun-flying, drifting about in lazy circles on those summer days which seemingly were designed especially for R/C sailplanes.

There is no long list of awards or important competition statistics to hang out for review. The Draggin' Fly has never been registered on a contest flight schedule. An introduction to battle remains to be made by subsequent builders . Hyer's original is still pure and true to purpose, the casual challenge of sport soaring.

The Draggin' Fly is not difficult to build, but it's not a weekend project. There are a lot of pieces - mostly sticks and other straight cuts. The basic structure of the forward-cranked wing panels is quite similar to modern compe-tition free-flight practice check some of those 'Fast Richard' Mathis brainstorms. The V-tail hasn't a rib in it - just geodetic capstrips and sheet balsa movable surfaces. The fuselage is classic - functionally as developed by years of practice and evolution. A review of Zaic's Model Aeronautic Yearbooks will substantiate its heritage... " 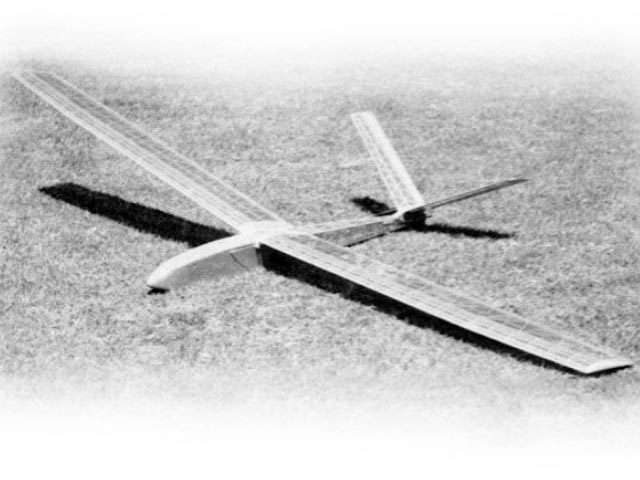