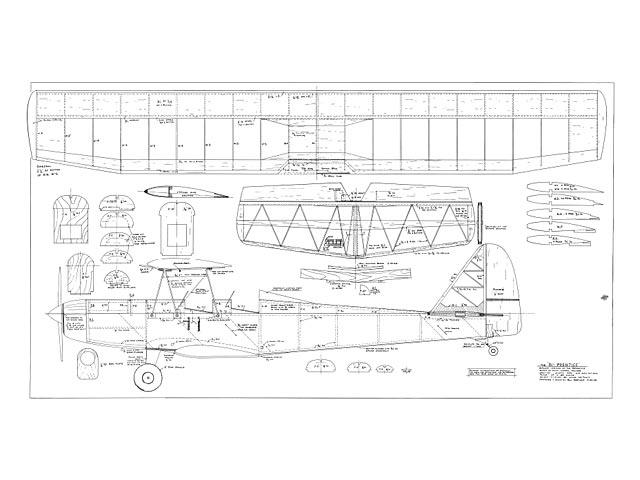 Note the orginal Apprentice (oz10199), was first published in MAN May 1968. This here is later (biplane) version. Bublished without any photos, in MB 1971.

Quote: "From time to time, if our readers express enough interest in the idea, we would like to present construction projects which are, in a certain sense, incomplete. An example of what we have in mind is this month's presentation, the Bi-Prentice.

The usual construction article is of a proven design, such as Jack Elam's glider in this issue. The article includes, in addition to the plans, several photographs of the model, and a text which gives some background and/or accomplishments of the model, along with instructions for building. This type of presentation is pretty much standard throughout model publications.

There is, however, a large untapped source of designs that never reach the modeling public. These are the ones created by designers who do not always have the time or opportunity to build, test fly, and photograph every model they put on drawing paper. There are also many tested designs that don't get published; sometimes it's lack of photographs, sometimes the designers don't have the desire to put together a text.

It is not our intention to present wild, far out (unless they've been tried) figments of the imagination that some kook may have dreamed up while on a trip, but rather, good modeling projects that if not published incomplete, might never get published at all. If you have something that fits the description, drop us a note about it. We'd also like to know your opinion on the idea.

The Bi-Prentice was a follow-up design to our Apprentice (oz10199), which was published in the May 1968 issue of MAN. By making only minor changes in the flying surfaces, and designing a new fuselage, we came up with a biplane version. One Bi-Prentice was built and flown by Rudy Black, a modeling buddy from Delaware. The only problem he had was cured when he moved the balance point forward to the location indicated!

As with the Apprentice, this airplane is designed for rudder, elevator, and engine speed control. Ailerons are unnecessary. Engine size needed wil. depend on your building habits. A gooc .29 would fly a 4 pounder in a calm fashion. For 5 to 5 1/2 pounds a .45 or or.50 would be just right. A .60 should only be necessary if you're inclined toward lead-sleds.

Don't be afraid of the coat-hanger cabane struts. They're plenty tough when used as shown, and are much easier to work with than music wire."