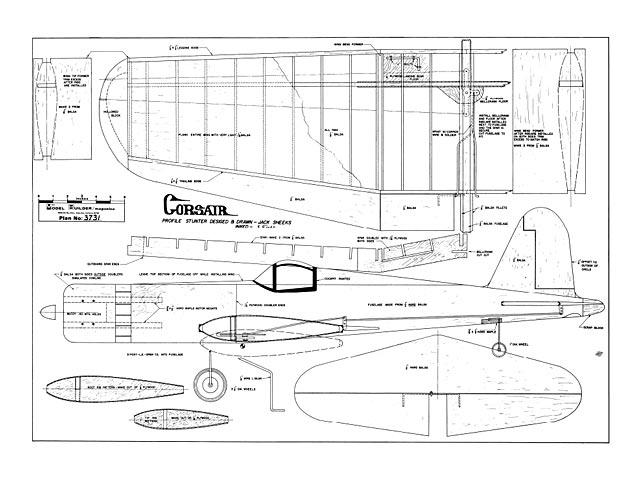 Quote: "Great flying profile stunter for .40 engines. More and more scale is appearing in stunt circles. Profile is the easy way to get there. Corsair 'F4 U/C' by Jack Sheeks.

This profile stunter should be called the DuVall Corsair. Why? If Dennis DuVall hadn't been so persistant with me it would never have been built. The C/L model clubs here in Indianapolis are much like others around the country - they lean strongly toward profile models. These ships cost little to build, take a heck of a beating, and are a ball to fly, while transposing a raw beginner into a pilot.

In some areas of club activity, the competition gets tough even without the members knowing it. Some thrive on which plane is faster, others on whose plane is finished the best, while still others feel like a king if their ship will out-perform the competition in stunt pattern. The latter is the category that Dennis DuVall falls into. Dennis has about 4 months of flying the entire pattern under his belt and decided competition stunt was his bag. Well, there are many good stunt model kits and plans on the market now, so that was no problem; but he wanted something out of the ordinary for profile stunt. On one of his frequent visits to my balsa butchery palace we were discussing the many avenues of design and the varied aircraft that would fit the bill. I had to open my mouth and tell him the Corsair has always been a favorite of mine and that I had a plan I had drawn five years ago and never built.

That did it. Nothing would stop him until I drew a profile of the ship; same size as the full scale ship, but with a profile body. His wife, 'Buns,' was a little perturbed 'cause we worked into the wee hours. The kids were fussy and she had to work the next day, but undaunted by his wife's threats of his having to sleep in the car, he insisted I complete this project. When I would say, I'll finish this in the morning, Dennis would give me one of his hurt puppy looks, and we'd continue putting a line here and there, explaining as we went.

After Dennis had the Corsair finished and ready to fly, I told him I should have the honor of its first flight. Much to my surprise he said OK. The ship grooved well and turned quickly but needed a few trim changes. After the changes were made the ship flew a good stunt pattern - but something was still lacking - the right prop. We finally settled on a Top Flite 11 x 6 Power Prop. This seems to have settled the McCoy' 40 down to a steady run and now the Corsair turns in a very good constant pattern. And believe me the ship is a real eye catcher at the flying fields whenever and wherever it appears. So, if you're one of those guys who wants that little something extra in a profile, read on.

CONSTRUCTION To begin this profile jewel, go to your nearest hobby dealer and buy the lightest and straightest. wood he has. Now that you're back home in your little kingdon, cut the fuselage from medium 1/2 inch balsa. Cut the upper part of the fuselage (cockpit) from the scrap that's left, but don't glue it in place yet..." 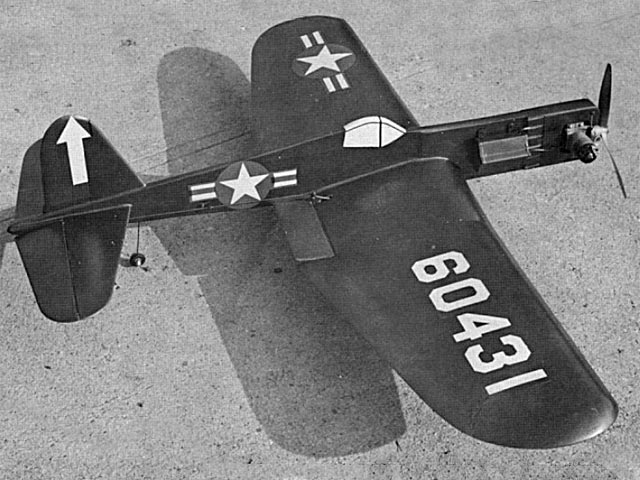