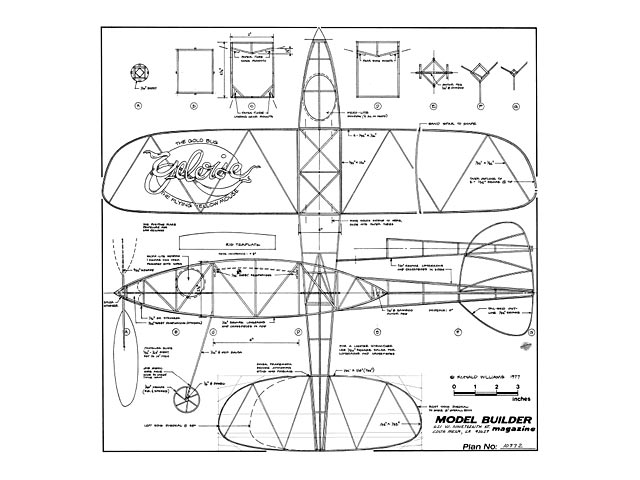 Quote: "Yeloise, a Manhattan. By Ron Williams. One of the newest classes of indoor model, the Manhattan is a curious mixture of old time stick-n-tissue construction and the fragile delicacy of the highly scientific 'microflimsey'.

The first time I saw a Manhattan was at Columbia's Low Library Rotunda. It was Ed Whitten's 'Riversider', and it seemed gigantic. 1 couldn't help but think of it as, perhaps, an 'Old-timer', and found myself looking up into the dome to reappraise the space in terms of this great clunk of a plane. Richard, Ed's son, wound, as Ed held the plane - the rubber seemed enormous - and I wondered. It took off quite gracefully and began a dignified climb toward the high arched windows into the streaming sunlight.

I was distracted momentarily by another flyer, and then turned to Richard to ask where the plane came down. His reply, that it was still flying, astounded me. I was used to anything resembling the Manhattan, such as a large indoor scale job, returning to the floor after at most, a minute's flight. This flight lasted more than two minutes, and that to me was really something. Indoor had previously meant planes that were hardly there or planes that were hardly up. But the Riversider, at more than 10 grams and what seemed great bulk, was something else.

I immediately promised myself I'd build a Manhattan, but one thing led away from another until some time had passed and a few other flyers built them and enthusiasm mounted, and ... well, I began sketching, trying to come up with an idea worth following. The bulk of the required fuselage 'container' and the other limits for the class gave a very definite shape to a conventional format. I looked at what photos and layouts I'd found of other Manhattans and remembered John Triolo's 'Skyscraper' with its pink, merthiolate-dyed frame and tissue.

From some corner of the wood-work came the notion of a plane with the appearance of being alive, like an insect or an animal. The sketches began to look like a crass between a bug and a mouse. I called it 'Yeloise,' after Eloise of the Plaza, a children's book character, my daughter called it 'The Flying Yellow Mouse', and Ed Whitten saw it as the 'Cold Bug'. As I worked some structure into the scheme, it began to look possible and so the lines became harder and harder until I could start laying up the balsa.

The fuselage was built in two sections, the pod (thorax?) and the boom or tail cone. The construction was conventional, with two sides being built simultaneously and then cut apart on removing from the building board. The longerons were cut very slightly at the outside corners at the front and back of the center 'required' box, after the box was framed. This allowed the sides to be pulled together toward the nose and tail without distorting the center box. The longerons were laid up wet and wet again when framing the nose. The cracks were glued when everything was framed with two or three thin coats of Titebond. (Titebond was used throughout, with the exception of the rolled paper tubes, but more about those later).

The tail cone was framed and glued to the main fuselage with a minimum of fuss, but slowly and carefully. Diagonals between pod and boom were soaked, bent, cut to fit, and installed, using tweezers to locate them. The horizontal (top and bottom) diagonals were then installed and everything double-checked for alignment over the plans.

The wings and tail surfaces were made by bending soaked wood around cardboard forms. I'm too lazy to make a trip to the water tap to soak a little piece of wood, so I run it back and forth through my mouth, working up a good gob of saliva to wet it down. Works fine (ugh!). A thin stream of Titebond was used to laminate the wing outlines. They were held to the cardboard forms by paper-lined strips of 1/4 inch wide masking tape (I make a whole bunch of tapes by laying a strip of bond paper or heavy tissue 1/2 to 3/4 inches wide on a linoleum surface, then laying 2 inch lengths of tape across this strip about 1/8 apart..." 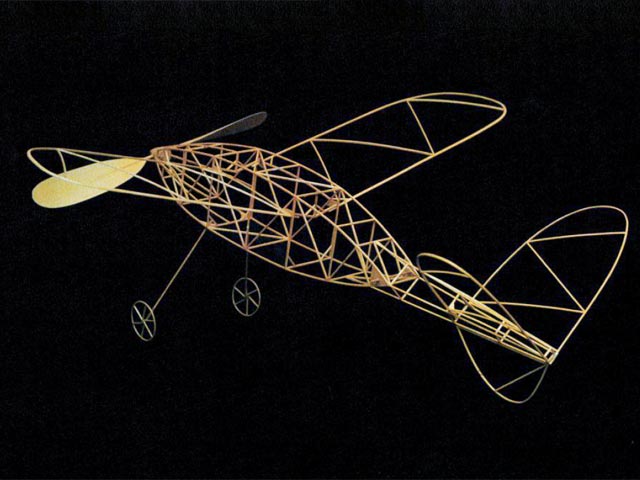