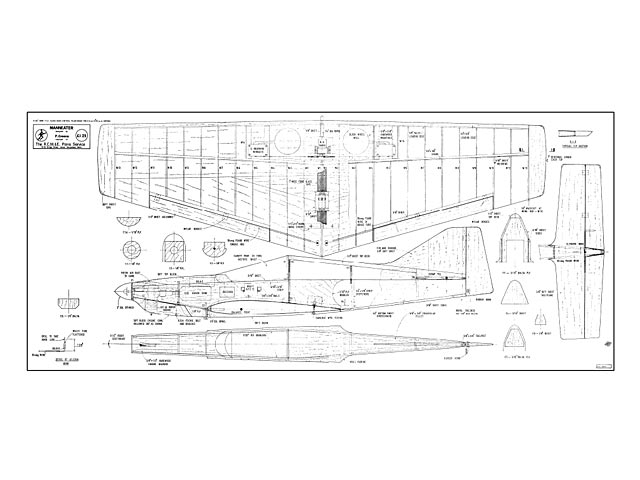 Quote: "AFTER seeing Frank Van den Bergh thrill the crowds with his Midget Mustang F.1 Racer at the Nats over four years ago I knew pylon racing was for me. The sheer speed and response that these small semi-scale models had spurred my imagination so much that I felt like building one immediately. At that time I was still cutting my teeth on slope soarers and the thought of flying a pylon racer at the Nats was only a pipe dream.

With the introduction of the FAI formula 18 months later my interest was again roused, so much so in fact, that when the plans for Frank Van den Bergh's 'Phaeton were published I rushed over the the RCM&Es offices at Hemel Hempstead to purchase a set. Alas, I wish my building was as fast as my driving because it wasn't until the following spring that l actually finished the model. (I'll have to give up that other hobby.)

My first season of racing ended with my model in one piece, my nerves shattered, and my wife shouting: You had better try and find another woman I can't put up with this much longer. I suppose it was a bit much expecting her to get up at 4 am in the morning just so I could go pylon racing at RAF Topcliffe, Yorkshire.

By that time my well loved 'Phaeton' was looking rather tired and with the introduction of the HP-40R PR I set about designing and building my own model.

Basic design requirements were for a clean, light model, of pleasing lines that fitted the FAI rules with no excess fat as it were. Construction also had to be reasonably simple and the model generally quick to build as pylon racers have a habit of hitting other pylon racers - if you see what I mean. The result was Manneater.

I chose an inverted engine for its aesthetic appeal, and have personally had no trouble with hydraulic locks on the starting line. The use of retracts seemed at first to be a debatable point. Was the advantage gained in speed worth the extra effort of installation, not to mention the extra cost? Well, in my opinion, the answer is YES! After an entire season of racing I had no trouble at all with the undercarriage. The key to reliability is in the accuracy of installation, and the type of servo used to operate them.

Prototype No.1 used the German-built Mini KDH units actuated by a special retract servo made by MK Skyleader very kindly supplied me with a servo amplifier to use with the MK retract servo so that I could plug it straight into the fifth channel of my SLX6 receiver, thus alleviating the need for an additional power pack. My latest model uses the new Goldberg retract units and these too have proved excellent in operation and are to be preferred for their unique and simple construction. On the performance side I am sure retracts score as the acceleration out of the base pylons seems incredible with the wheels up. General flying characteristics are very good also and the model is extremely groovy when flown gently and with the minimum of control surface movements. I think smooth flying as well as speed is the key to winning pylon races, If you get the chance watch Bob Vidett and you'll see what I mean.

Construction: Basic construction is quite simple but before you start make a nuisance of yourself in your local model shop and select some top grade light balsa. Try to aim for as light a model as possible. The original weighed just under 5 lb, complete with KDH mini retracts. Care must also be taken with such points as engine cowling, wing seating, and the installation of the retracting undercarriage.

Wing: A conventional built-up structure is used for the wing. For the top and bottom sheeting I used 3/32 in balsa, this was butt jointed and sanded to 1/16 before gluing to the ribs. This method ensures a smooth finish to the wing sheeting without any dips or warps between the ribs. No dihedral braces are used, the two wing halves being butt jointed and glued at the root. A 1 inch wide strip of fibre-glass tape is then glued in place over the joint using fibre-glass resin as an adhesive. If you intend to use retracts such as the Goldberg units then follow the plan closely for the correct location, and use the right servo for the job, such as the Japanese MK distributed by RipMax.

Fuselage and Tailplane: The fuselage sides are cut from medium soft 3/16 in sheet, and the 1/32 in ply doublers are contact cemented in place. Mark and then epoxy the hardwood engine bearers to the fuselage sides..." 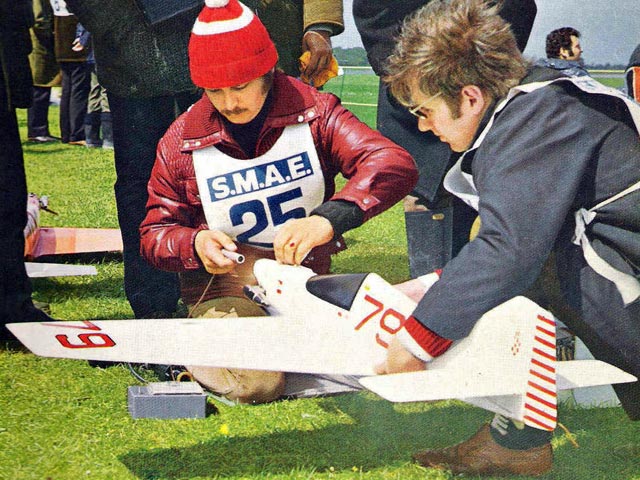