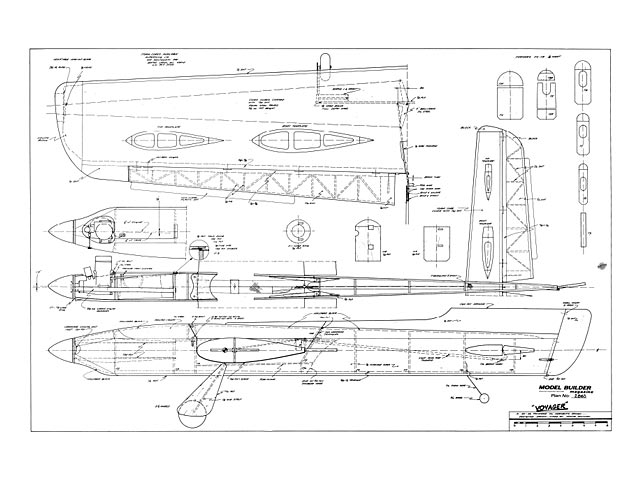 Quote: "The Eastern European CL Champion has evolved this design over a number of years of successful competition. If you want a highly-competitive control line aerobatic craft, this is for you.

The Model club in Salgotarjan organized its first control line aerobatics contest nine years ago. They called it 'Nograd Cup F2B' Nograd is a district in Hungary and the beautiful town of Salgotarjan is situated in this district.

From 1976 to 1979 only Hungarian competitors flew at this contest. Since 1980, the Nograd Cup F2B has been an open FAI international competition. Only Czechoslovakian, Polish and of course Hungarian contestants flew in 1980, but four years later in 1984 thirty-four F2B pilots from Czechoslovakia, Poland, Austria, Romania, Hungary, and even from North Korea came to Salgotarjan. Thus this time Nograd Cup F2B becomes the most attractive contest in East Europe, an open contest with competitors from the whole world coming to Salgotarjan every year in September.

Nograd Cup F2B is conducted according to FAI rules that are approximate to AMA rules for control line precision aerobatic models. Each contestant does three flights. Five judges score the flights. Only the sum of three middle scores of them gives the result of one flight. Sum total of the scores of two best flights gives the result of competitor and his place. Almost every international contest is contested like this.

Top three competitors and the best junior under 18 get the prizes and the best flyer gets the Nograd Cup F2B. It is a very expensive beautiful cup made from crystal. The rules say: who wins this cup three times in five years will get this cup forever.

I flew at this contest five times. In 1980 I did over one hundred flights because the World Championships were held in Poland. My stunt ship Lucky-15, made in 1979 was a very good model for bad weather. Thus I was afraid of only two flyers in Salgotarjan: Attila Morotz from Hungary and Jan Skrabalek from Czechoslovakia. After three days of hard fight in the air 1I was a winner and won the first international Nograd Cup F28. I was very happy because it was my first valuable success in an international contest.

For the 1981 season I made a very good and interesting model L-18 MALUCH as a small copy of Lucky-15. This model was published in Flying Models June 1982. But unfortunately it was destroyed in Czechoslovakia so for the Nograd Cup F2B in 1981 I had to come with my older stunt ship which was not so good. Thus I got fourth place only.

In 1982 I flew the L-19 based on Bob Hunt's Genesis 40. It flew very well in good or very windy weather, powered by ST 46 - my favorite engine - with three-blade prop 11-6, my homemade. During World Championships '82 in Sweden I got 16th place, much better than any other Polish stunt flyer in history of World Champs. So I won third international contest Nograd Cup F2B second time without any problem that year.

In 1983 I flew with the same L-19 model - winner of many international and national contests. After two clays of Nograd Cup F2B I kept first place but my Hungarian friend Attila Morotz was close behind us. So third day of this contest was very important for both of us. During very windy weather Attila got a bit more points and he won fourth contest of this cup. I felt I was the winner but as I always say - the judges are always right. And friendship with other modelers is much more important to me than gold medal or cup.

For 1984 season I made new experimental model L-208 VOYAGER. It is a good stunt ship and flies very well in good or bad weather, ie I won international contest in Liberec, Czechoslovakia during very bad weather with rain and wind about 25 mph even..." 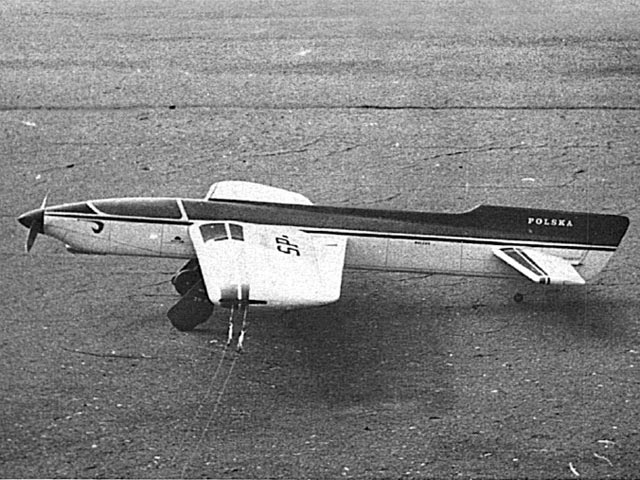