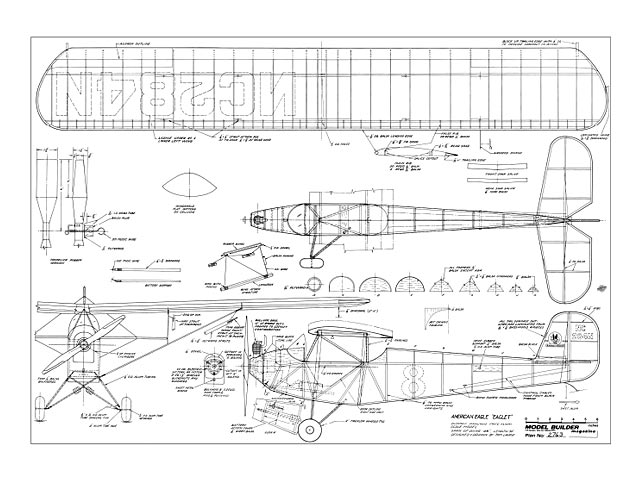 Quote: "Our Plane-on-the-Cover was originally designed for the old 48 inch minimum span Jumbo Scale rules. Now it is a fine airframe for the VL electric motor. Build it to fit your fancy. American Eagle 'Eaglet', by Tom Laurie.

Ed Porterfield, the president of American Eagle Aircraft, asked his engineering staff to come up with an airplane design that could be sold for about one thousand dollars. The configuration selected by Porterfield was the Eaglet, which was the brainchild of Noel Hockaday, who had joined American Eagle when they acquired the Wallace Aircraft Company. The Eaglet was an ultra-light, four hundred and sixty seven pound, open cockpit, parasol monoplane. It was
originally powered by a Cleone twenty six horespower engine, and later by Szekley engines of thirty to forty five horsepower.

Approximately sixty seven of the Eaglets were built through July of 1931. The Eaglet could be purchased for $250 down and the remainder financed over twenty four months. This version of the Eaglet was the Model 230. The next version, powered by the Szekley 45 horsepower engine, was designated the B-31, and is the subject modeled in this article.

The three-view drawing which I used contains all significant specifications, performance and many construction details of the Eaglet. The three-view is of exceptional quality, and it includes a color scheme and license number of a particular Eaglet which I chose for my model. The scale locations of the wing ribs and empennage structure members are shown, and were followed on the model. Also, considerable detail on the cowling sections and attachments around the engine are shown. The source of the three-view was Don Pratt's fine article on the American Eagle Airplanes in an early issue of Sport Flying Magazine. A good copy of the American Eagle insigna is shown on the three-view and fits the model perfectly.

I originally selected the Eaglet as a subject for the Flightmasters Jumbo Scale Event. It has beautiful proportions for a flying scale model - good aspect ratio wing, long fuselage, nice sized tail surfaces (I enlarged the horizontal tail approximately 10%), a landing gear which lends itself to good shock absorbing qualities, and good propeller clearance if you are building a rubber version.

I used an opaque projector to enlarge the three-view drawing to the 48 inch wing span. The opaque projector reduces the plan enlargement from a lengthy, tedious job down to approxi-mately a one hour job. The three-view was enlarged by a factor of 6.86 to obtain the forty eight inch wing span, so this would have required the use of a calculator for each measurement and the expenditure of an awful lot of time. I have found the projector very useful in selecting a subject for modeling. Just slip a three-view in the projector and you can see in an instant what your subject looks like full size.

I used the VL Products, VO-101 Electric Flight System, which features the Hytork 48 Motor with a planetary gearbox driving the propeller at a reduced RPM. The system includes a three-cell fast charge battery, a switch incorporating a charge plug, and a field charger. The field charger uses a twelve volt wet-cell battery, a five-minute timer, a rheostat to control charge rate, and a meter to indicate the charge rate. The VL Motor is somewhat marginal for a model the size of the Eaglet, however, it results in very realistic, scale-like flights (The scale speed of a forty-eight inch span model of the Eaglet is approximately 10 mph).

The Eaglet took second place in a Free Flight Scale Contest for electric power, sponsored by the Flightmasters, this past summer at Mile Square Park. It was judged first in scale points. As previously stated, the flights are most realistic, and the takeoffs a beautiful
sight to see.

CONSTRUCTION The model construction is of conventional scale model building. The wing attachment is a little unique in that it uses Mini Robart Hinge Points to attach the wing struts to the fuselage and wing. These hinges are normally used to hinge surfaces on RC models. They permit easy wing removal when you want it and they come apart rather easy in a crash situation, thereby saving the model from severe damage..." 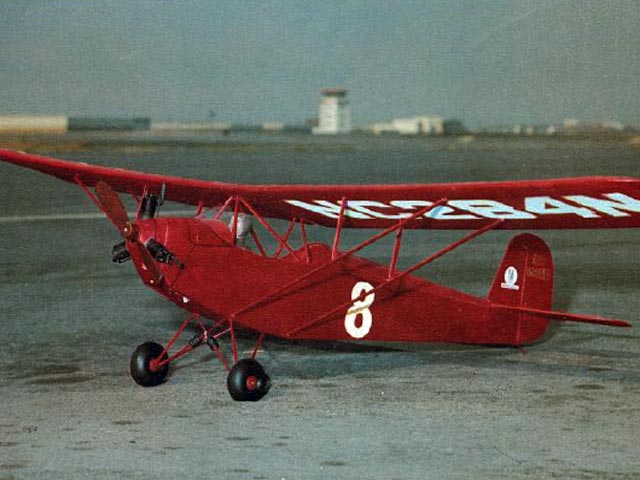