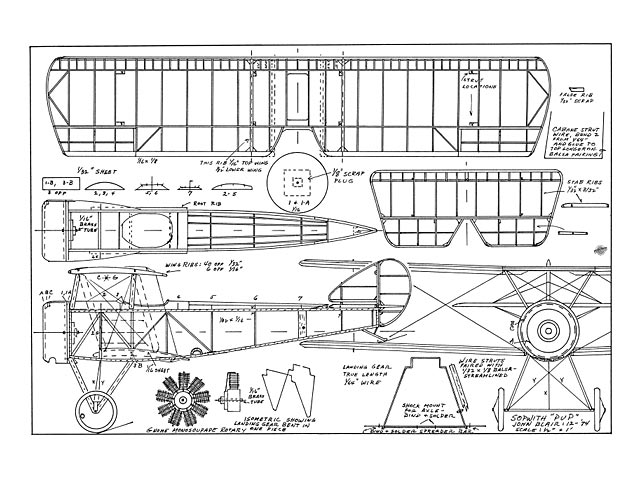 Quote: "One of the winners in our 1976 Parcel Post Proxy Peanut contest, this excellently detailed model is on permanent display in Model Builder's office. Also a fine flier.

The Sopwith Pup is universally considered to be one of the all-time classics in service from 1916 to 1917, it performed with considerable success; its superb maneuverability and ruggedness enabled the Pup to remain effective in action even after its speed and armament had been far surpassed.

The Pup also scales down well. Its proportions and flying qualities as a peanut are delightful. It looks 'right', sitting on the table or circling overhead.

Along with most aircraft of the period, the Pup's construction was very model-like, and can be reproduced almost piece-for-piece without much sacrifice of flying ability. The plans, then, show almost exact scale structure, especially in the wings and tail. If a lighter, simpler model is desired, such details as false ribs and aileron structure may be omitted, and the ribs spaced farther apart. Built as shown, the model will weigh approximately .75 oz; carefully omitting part of the structure could reduce this to .50 oz or less.

The construction may be as straightforward or complicated as your choice of detail demands. The first step, however, is a departure from the customary. Begin by preparing some non-stock wood. If no balsa stripper is available, careful work with a good straightedge and a very sharp Uber Skiver will be OK. Prepare a supply of 1/32 x 1/16 strips for fuselage cross-members, stringers, wing spars, etc. Some 1/32 x 3/32 is required for elevator ribs and spar, and some 1/32 x 1/8 is needed for strut fairings. Sand a piece of 1/32 sheet down to about 1/64, for wing ribs and fuselage top decking. Strips of 1/32 x 1/16 basswood are required for laminating the flying surface outlines.

The fuselage "box" is built with 1/16 sq longerons, The first three bays from the the nose have 1/16 sq cross-members; from there back, use 1/32 x 1/16, except for the tail post. After former 1-A is positioned on the nose, remove bottom cross-pieces 1 and 3, and install the landing gear wire, with formers 1-B and 3-B sandwiching the wire in place.

Next, install the cabane strut wires by gluing them directly on the top longerons. The top decking will cover and strengthen this joint. The top decking may be installed as one piece, but the side, from 1 to 2-S, is a compound curve, and will have to be planked with 1/32 x 1/4 strips. From 2-S back, the side streamlining is completed by three short 1/32 x 1/16 stringers, and is tissue covered. A corner of the side sheeting will have to be cut away to install the lower wing root rib, which is part of the fuselage..." 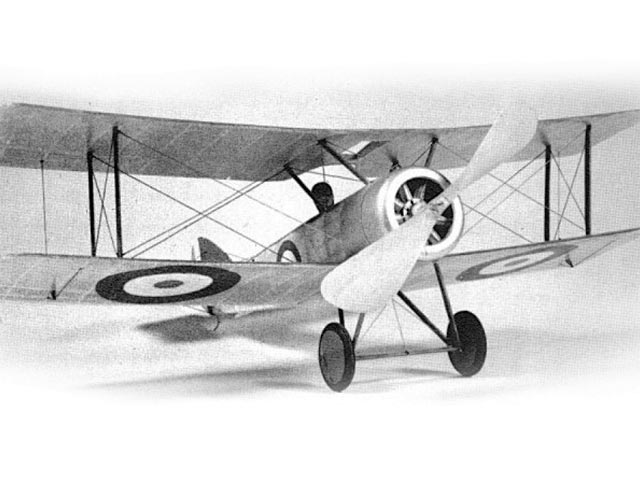