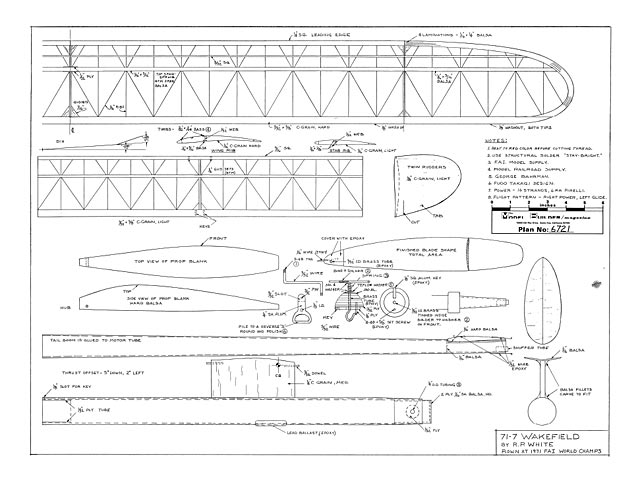 Quote: "Wakefield 71-7. Ounce for ounce the third best Wakefield in the world, designed, built, and flown by US Team member Bob White. His trimming method is well worth reading even if you don't intend to build the model.

The model presented here is the seventh in a series of Wakefield designs that I used at the recent World Championships in Goteburg, Sweden. My approach to Wakefield design is performance, reliability and simplicity. By the omission of auto surfaces I have increased the reliability, and by careful placement of the center of gravity, relative to the model's individual flying characteristics, the performance, especially in glide, has been steadily improved to where, under certain conditions, the model will max without assistance.

When we talk of still air performance we have to consider other factors such as air density. It's quite difficult to evaluate a model under still air conditions, so I won't make any claims as to the model's still air performance. In our early morning California air I have no trouble exceeding the three minute max, but later in the day, when the temperature rises, I'm afraid it's flight time is somewhat less than-3 minutes.

This model is not intended for the beginner, although most assembly can be done without the aid of special tools. You don't need the facilities of a machine shop and parts are readily available at your local hobby store. The motor tube is two laminations of straight grain hard 1/16 balsa. Covering this is a layer of fiberglass cloth, applied with nitrate dope, and an inner plywood ring to strengthen front end in case of motor breakage. The motor tube portion of the body will break if the fiberglass cloth is not used. A layer of tissue is also used over the fiberglass cloth. The plans are quite self-explanatory.

The ballast weight, which wil! vary considerably, depending on the total weight of the airplane, performs an important function, in that it helps locate the model's best center of gravity position.

The first step in test flying the model is to properly locate the center of gravity. This is accomplished by assembling the model completely ready to fly, and taping the lead ballast to the model as shown on the plan. The model is then test glided until it is gliding satisfactorily. The lead ballast is then moved rearward until the model stalls. Then positive incidence is added to the stab until the model glides evenly. This procedure is repeated until the model reaches what we call a zero condition of instability, which means the model flies in a straight line, either dives or stalls, depending on how it is launched. Then the ballast weight is moved forward and incidence is taken away from the stab until the model is gliding satisfactorily and also exhibits stability characteristics. This is my method of establishing the optimum glide characteristics of the individual model.

Power flights are accomplished by putting in 100 (one hundred) turns and launching the model in a gentle right circle and adding rudder tab to circle left in the glide. As power increases the model will straighten and go almost vertically during the burst, then level and circle to the right. During a normal power run, about 3 (three) turns is normal.

A word about rubber: I use a Bob Wilder torque meter to test my motors before flying. Motors are tested for consistency and adequate power. This is accomplished by winding a broken-in motor half way and measuring the torque. By using this method I don't fatigue the motors and yet I have a measure of the available power for each motor. This avoids the inevitable tired motor on your deciding flight.

There are many articles written on the strategy of flying Wakefield in FAI competition. Mostly, I feel, it is important to have a properly adjusted and thoroughly tested model that you understand very well. Use the best possible rubber and put the model in lift, or bands hold blades snug to fuselage once prop stops. Blades carved from hard, straight grain balsa. at least, keep it out of down air." 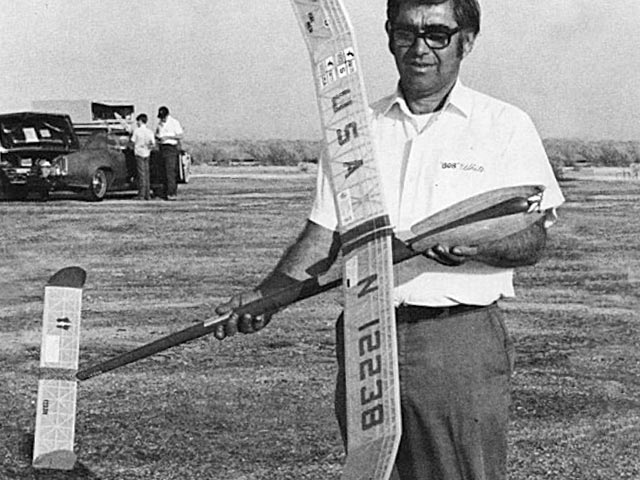