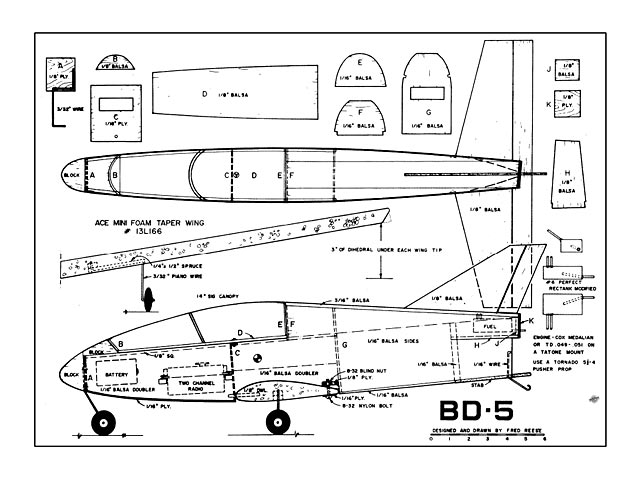 The BD-5 has aroused interest wherever it has been seen and no wonder! What man doesn't dream of his own single seater doing giant loops and rolls across the sky. Jim Bede has, for many, brought this dream to reality and at a price most can afford. And so it is natural that models of this amazing little airplane will be built and flown.

Already several large models are being flown, and pictures have appeared in some publications. The model presented here is an attempt to produce a realistic looking airplane with the least amount of effort and expense. The project was successful, but took more effort on my part than anticipated.

The forces of a pusher type engine are different from a tractor type installation. The torque is opposite and requires more engine offset to correct, as there is no prop effect on the rudder. I changed the dihedral angle three times before I was satisfied with the turn. The elevator also had to be lowered from the scale position, as the stall was sudden and the airplane immediately went into a spin. By lowering the stab to the bottom of the fuselage the problem was corrected.

The photographs show the airplane in its original configuration, as by the time it was flying well, it looked too ragged to photograph again. As expected, the clean lines with the pusher engine configuration produced a very fast flying airplane. The control response when properly trimmed is normal, and in spite of the short tail moment, the airplane is not overly sensitive or difficult to fly.

CONSTRUCTION: Cut out the two fuselage sides from fairly hard 1/16 and at the same time the doublers. Make the radio compartment doublers vertical grain and the wing saddle doubler with the grain. Contact cement the doublers to the fuselage, leaving slots for the bulkheads and a strip for the 1/8 sq at the top. Cut out the bulkheads and bind the nosegear to A with heavy thread or copper wire. Glue in bulkheads C and G.

When dry, epoxy in A and then add J and H. Cut through the fuselage sides below H forward to the 1/16 x 3/8 vertical doubler. Bend the tail skid from 1/16 wire and epoxy it into place as the lower rear portion of the fuselage is pulled together. Glue on the noseblocks and the 1/16 plywood front bottom. Epoxy the firewall (K) into place noting the necessary right thrust. At this time the fuel tank must be added, as there is no access later. I used a #6 Perfect rec-tank and replaced and repositioned the vents and pickup as shown on the plans. The original pickup was discarded, and the hole soldered closed. Drill a hole through the Tatone mount for the fuel pickup tube. The central location in the tank of the fuel pickup provides fuel to the engine no matter what the attitude of the airplane until the tank is half empty, and then the engine quits.

The tank used should be twice the volume as would normally be used. Cut the top rear of 3/16 soft balsa slightly oversize and glue into place and then add F. Cut and fit the 1/16 balsa upper rear panels and glue into place. This step can be facilitated by moistening only the outside of the wood causing the wood to warp naturally to the desired curve. Glue the 1/8 sheet rudder and stabilizer into place and the remaining lower rear sheeting. Build up the canopy frame (parts B, D, and E) and add any cabin detail and the hatch hold down at this time. Trim the 14 Sig or Du-Bro canopy to fit and glue over the frame with Duco cement or epoxy. With the canopy in place, shape the nose blocks and the turtledeck and sand everything in preparation for painting.

The Ace Mini tapered foam wing was used with no additional finish or covering. Slots were cut into the undersides for the slotted spruce or pine landing gear blocks which were then epoxied into place. The landing gear wire is held into the slots with short #4 SM screws with the heads overlapping the slot. Epoxy the two wing halves together with 3 in of dihedral under each wing tip. This was the first time I used the dowel and nylon bolt wing mounting with the Ace wings, and I will never do it any other way again. With all my crash testing of his design there was less damage to the wing and the fuselage than if I had used rubber bands.

The fuselage was finished with three coats of AeroGloss. clear dope and two brushed coats of white. The dark areas were masked off and painted with red dope. A ruling pen and red dope were used for the pinstripe. White MonoKote was used for the numbers.

FLYING: Set the engine so that it will hold peak power with the airplane level and slightly nose up. This means a leaner setting, as the engine richens as the nose is raised. It is important that full power is maintained in level flight and during climb-out. Providing the weight is kept down to about 24 oz, the ship is fast and quite agile. With power off, the glide is very flat and also fast." 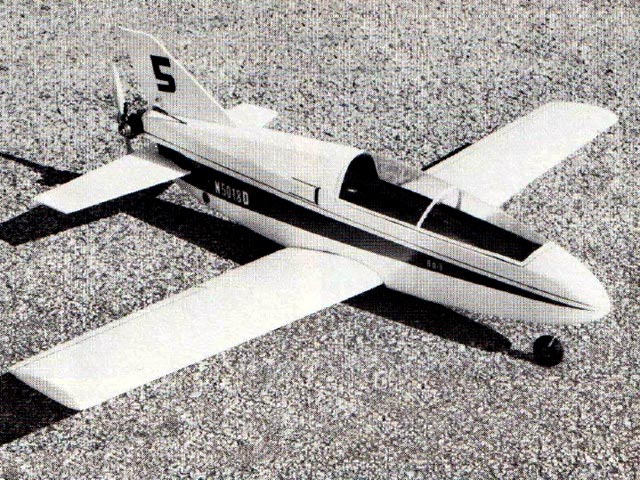