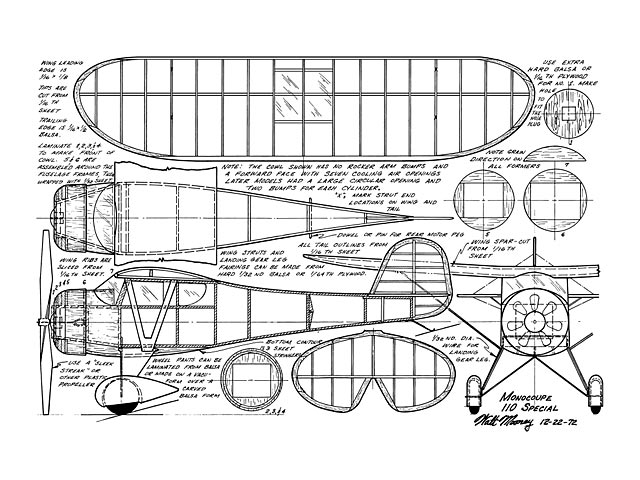 Quote: "Monocoupe 110 Special. Designed by Walt Mooney, built by Bill Pardoe. In the continued search for lots of area in only 13 inches of span, our Chief Peanut designer found this clip-winged version of one of aviation's prettiest aircraft. It's hard to keep a good secret!

When selecting a model for Peanut Scale, it is generally a good idea to pick one that has a low aspect ratio wing so that it has as much area as possible within the thirteen inch maximum wing span allowance. A high wing model also is a good choice for a flying scale. The Monocoupe 110 Special fits these standards quite well so I selected it for a design. Bill Pardoe came over when I was just finishing the working drawings. He thought it looked like a good model and so I gave him a set of plans.

The model in the photos is the result of Bill’s efforts with my plans, and he says that it flys really well, in fact it flew right off the board. I’m going to have to work faster or refuse plans to people like Bill if I’m going to have the pleasure of having my new designs first at the model field.

The model is basically of the same old structural technique, so there won’t be a discussion of how to build the model. Instead, there follows a more extended than usual discourse on the techniques for covering these small rubber models. It is not the only possible technique, but it is one that works.

The materials required for performing a good covering job on a model are as follows: Light weight tissue, clear dope, dope thinner, white glue, and water. Tools required are: fine sandpaper, a sharp razor blade or two, a fine brush, a soft brush at least half an inch wide, and some means of spraying a fine mist of water.

The model structure to be covered must have been assembled long enough for all the cement joints to be thoroughly dry. There is nothing more frustrating than to have a component come apart in the middle of a covering job! Sandpaper is the first tool to go to work. Use it carefully and use it thoroughly. All of the framework should be sanded smooth and there should be no cement bumps sticking up out of the surface to be covered. If there has been a temptation to leave out corner gussets, it should have been overcome. Make sure the contours everywhere are correctly sanded to shape before covering - there is no way to do it afterwards. Don’t proceed with covering until the model is completely sanded.

In the interest of wasting as little tissue as possible, cut out all the necessary pieces, using the plans as a guide. Make the pieces about a quarter of an inch oversize on all sides of the part.

Now thin out a small quantity, (a thimble full or so) of white glue with an equal quantity of water. This will be used to attach the paper to the framework. There is one caution to be observed, most tissue available will work alright with white glue. However, some kinds will almost disintegrate. The latter type may be attached with dope. So, if you are not sure of your material, try a sample first. On most materials, the while glue will penetrate better and attach the covering quicker.

The general method of getting a good covering job is to carefully apply a thin line of glue around the outline of the part. Then lay the covering lightly in place on top of the part. The grain of the tissue, if any, should go lengthwise of the part. (You can check the grain direction by tearing a small sample. With the grain, the tear will be more or less straight. Across the grain, it is impossible to tear in a straight line.) Now gently stretch the tissue lengthwise and rub it gently down on the ends of the part. Then stretch the tissue crosswise of the part and rub it gently down on the edges. The idea is to get the tissue to lay as smoothly as possible on the part without getting it too taut in any one place. If your fingers tend to get sticky, it is good to have a damp rag handy to wipe them on to remove the traces of glue. Now set the part aside to dry. Go on to do the same thing to one side of all the other parts.

After the parts are dry, use a sharp razor blade to trim off the tissue around the edges of each part. Now proceed to cover the other sides of the part in the same fashion as you did the first. When these are dry you use the blade to trim off the excess,except on the outlines of the wings and tail, where the tissue is trimmed to extend about an eighth of an inch beyond the edges and then is folded over and glued down so the edges are covered and therefore colored to match the rest of the surface.

Root ribs, which will be cemented to the model on final assembly, should not be covered with tissue.

Generally, no internal parts are cemented to the tissue however, in the case of concave surfaces such as under-cambered ribs on the lower sides of the wing, it will be necessary to put a thin line of glue on each rib and then press the tissue carefully down in place as you stretch the tissue smooth.

Now it’s time to shrink the tissue to give that final smooth tight surface that is desired. This is done by lightly wetting the tissue and letting it dry. It’s best to use a very light mist of water. The tool I use is an old spray deodorant plastic bottle that you squeeze to get a mist. I spray a mist of water vertically upward and then pass the part under the falling mist. It is unnecessary to get the tissue to looking wet. It should only get damp enough to sort of sag a little. Ideally, the tissue is damp but the structure has not been wetted. A wet structure will dry out last and thus will be easy to warp, and will be warped, by the shrinking tissue.

When the tissue is dry, inspect the covering. If there are places that are unshrunk or wrinkled, wet them again and let dry. If they still exist you can carefully cut out the offending area and add a small smooth patch or you can ignore a small wrinkle, secure in the knowledge that usually you are the only one offended by a small wrinkle on an otherwise delightful model!

If your Peanut scale model is to be flown only indoors, it is not absolutely necessary to dope it. Dope adds weight no matter how lightly applied, and thus tends to decrease indoor duration somewhat. For handling reasons, it's usually nice to put a light coat on the fuselage even if you leave the rest of the model un-doped. Dope tends to shrink the tissue even a little bit more. The thicker the dope, the worse this effect can be: And the result, if care is not exercised, is wings that look like propellers!

I usually thin out my dope about half-and-half, by volume, with dope thinner. Then, using the wide brush, I gently brush one coat on the wings and two on the fuselage. This is generally enough here in the southwest part of the USA but, in wetter climates, more dope may be necessary. If so, to keep from warping the model, its structure will have to be stronger and heavier or the dope will have to be plasticized to keep it from getting too tight.

At least the following items can be used to plasticize dope: Castor oil, oil of wintergreen, oil of peppermint, or camphor. Some other things can also be used but I’ve only used those listed. A little less than one percent of plasticizer will do the job. Camphor must be dissolved in thinner first but is the most waterproof. Wintergreen or peppermint smells the nicest in a snowbound kitchen! I’ve never tried it, but peanut oil might work and it seems most appropriate.

Have fun with Bill and Walt's Monocoupe 110 Special."

Peanut clipped wing Monocoupe 110 Special. This one is by Walt Mooney from the May, 1973 issue of Model Builder. 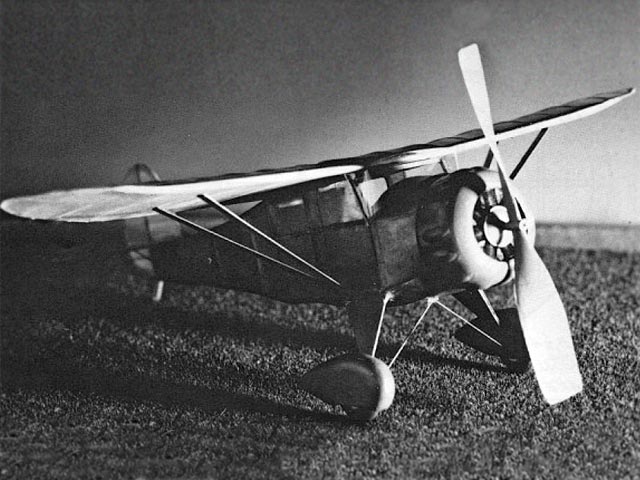