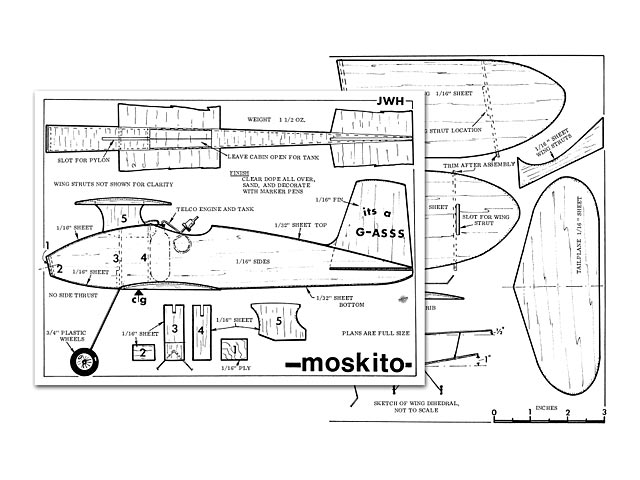 Quote: "Reminiscent of the pert little Springfield Waco biplane, designed around the K&B .020 'Infant', this tiny sheet balsa bipe has surprising performance with any one of the current CO2 engines.

This little model was designed on a Thursday, refined on Friday, built on Saturday - but not flown on Sunday, as the local store had run out of CO2 cylinders and I had to roam all over town for some and it was actually a week Tuesday before the first flights took place but it was worth the wait. Phew!

In fact, the first flights were a little scary, as I didn't have the correct downthrust figured out and the model kept wanting to return to base via the top of my head, hence the 'Moskito' name. Once trimmed (a lot of downthrust and a tweek of left rudder), the model flew magnificently, if I say so myself, with a splendid spiral climb, and a fairish glide (what do you expect with so small a wing area). There's probably even more performance in the model, as I've been running the motor at a medium throttle setting, rather than all-out.

Construction is reasonably straightforward - the main concern is to make sure that the final assembly is done correctly, no one likes to see an asymmetric biplane! Read on for details of the building procedure.

As we previously mentioned, the model doesn't take long to build, and if you use one of the new glues, it can be constructed very quickly.

Begin with the wings; by cutting out four wing panels, two upper and two lower, plus eight wing ribs. Use softish wood for these wing panels, something that will conform to the airfoil shape easily. Pin the ribs down to the building board, and cement the panels into place. Be sure, on the top wing, to recess the root ribs a little, to provide space for the wing pylon when the panels are glued together. While the wings are setting up, cut out the tailplane and fin, and cement these together now, making sure that the fin is truly vertical.

The next item is the fuselage frames, in particular Frame 3, which is laminated from two pieces of 1/16 sheet, with the U/C wire squashed between the two laminates. So we start by making the undercarriage, and the two pieces of Frame 3, then epoxy them all together..." 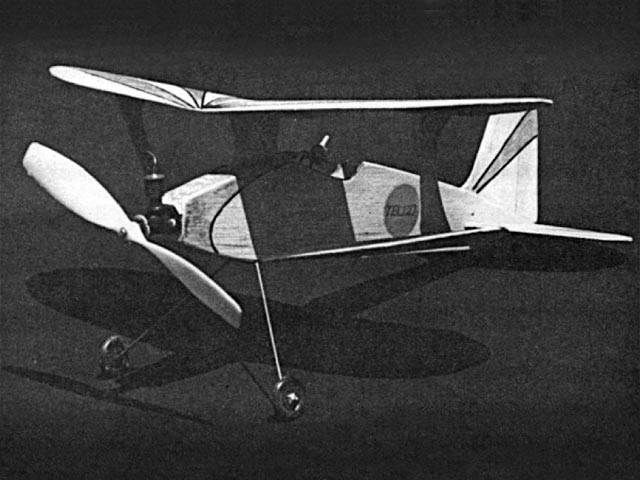