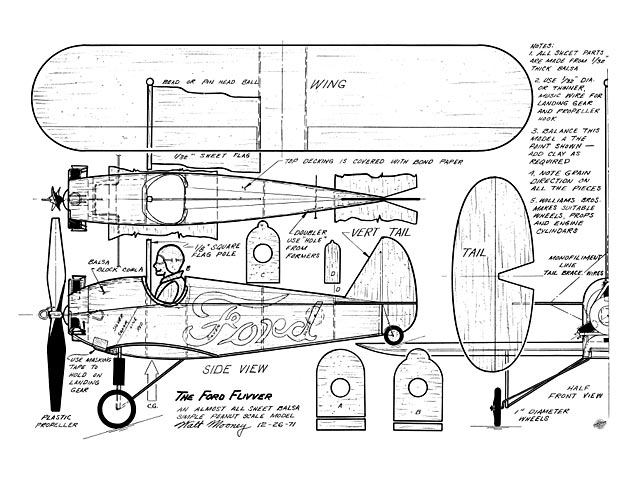 Quote: "Here's one that will keep the self-appointed aeronautical engineers busy explaining for a while. Walt raised the flag and the no-dihedralled Ford Flivver turned into a 'Stable Mable': Sets you to thinking, doesn't it?

Did you ever want to build a scale' low wing model but felt discouraged because it had absolutely no dihedral and the addition of dihedral would make it lose its unique character? The Ford Flivver is a model like that, except here is a sneaky development that makes it. like it was on rails. All we did was make the pilot carry a flag. The flag provides the necessary dihedral effect and the Flivver flies with an absolutely flat wing as far as dihedral is concerned.

Lest I get credited with a new discovery, let me say that a gentleman named Lanchester, in the 1880's, used this forward vertical fin to make a tandem wing glider fly. Everything has been done before, but sometimes the ideas can get added together in a slightly different manner and the result is an interesting new answer. This simple little model of all sheet balsa construction is a different approach and is quite an attention getter on the flying field.

All the surfaces and most of the fuselage is constructed using 1/32nd sheet balsa. Medium hard quarter sawed balsa is ideal. Note the grain direction indicated on the plan. The fuselage bottom covering should have the grain running across the fuselage. Cut out all the parts and sand the edges smooth. Only two wing ribs are required and these are actually cut from the bottom edge of the fuselage sides..." 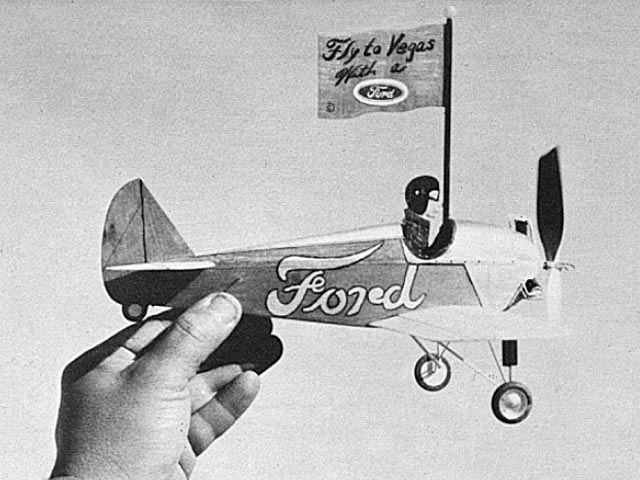