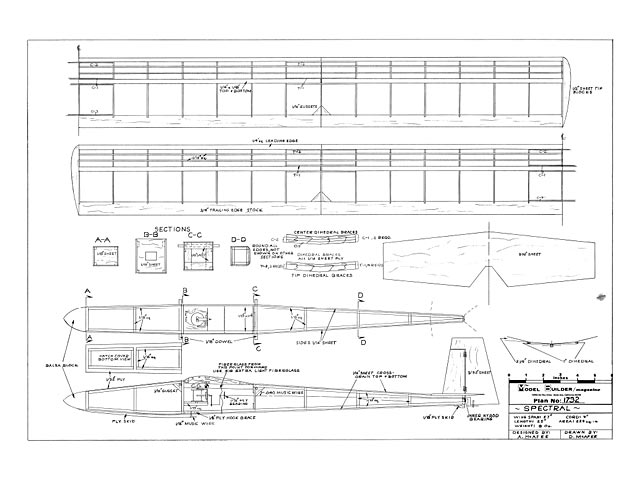 Quote: "Our young author/designer presents a thoroughly developed and tested soarer which is particularly suited for single channel operation. Also, there are some new super-light two channel systems. Spectral, by Andy McAfee.

After flying single channel for about a year, and flying many different de-signs, I wanted to design something that would fly good. During a meeting of the San Fernando Valley Silent Flyers, Jerry Krainock introduced a set of plans for a two channel, Jedelsky wing glider. I wondered, since I have not had much design experience, if I could scale down the plans in order to have a plane that was sort of my own, but easier to build.

This was prototype No.1. It had a four foot wing span and weighed eight ounces. I thought perhaps the flying characteristics could be improved by adding a different wing. I decided to use the Micro Fish wing because it had a constant chord. With this wing the plane flew much better. This was prototype No.2. Next, the wing was made lighter and a few other modifications were added. This brings us to the present design. The Spectral is very conventional, easy to build, for the beginner or ex-pert, flys outstanding, and best of all, it is inexpensive.

The Spectral has a fairly fast but smooth glide, whichadds to its high performance. The wing span is 57 inches and the all-up weight is ap-proximately eight ounces. The glider is capable of doing loops and other stunts. With it, I have achieved LSF 1 and prac-tically LSF 2. We have also done well in contests.

FUSELAGE: Start by selecting a medium light piece of 1/16 x 3 inch balsa. Then cut out the two sides, making sure they are exactly the same. Pin the sides down to a flat surface and glue in all 1/8 inch square longerons, wing braces and cross pieces. Next cut out all bulkheads from 1/8 inch sheet.

The fuselage is assembled directly over the plan for ease of construction and proper alignment. First install bulk-heads B and C in place, let dry. Then join the tail and add cross pieces. Next, glue in bulkhead A, and when the whole thing is dry, take up and sand the edges, add wing dowel gussets. Next plank the bottom only. Cut the actuator platform from 1/16 inch ply and install. Now in-stall the front and rear torque rod bear-ings. Install torque rod using actuator for alignment. Now plank the top and epoxy the hose block in place, shaping it to the contour shown. Round all edges of the fuselage. Construct the hatch cover from 1/32 inch ply and add the 1/8 inch square braces.

TAIL SURFACES Stabilizer, elevator, fin, and rudder are all cut from light 3/32 inch sheet, sanded to shape, hinged, and glued in place. Watch that alignment! Now it is time to fiberglass. Of course, it isn't needed if you like to repair a lot. Don't think the fiberglass is too heavy, you need the weight in the nose anyway..." 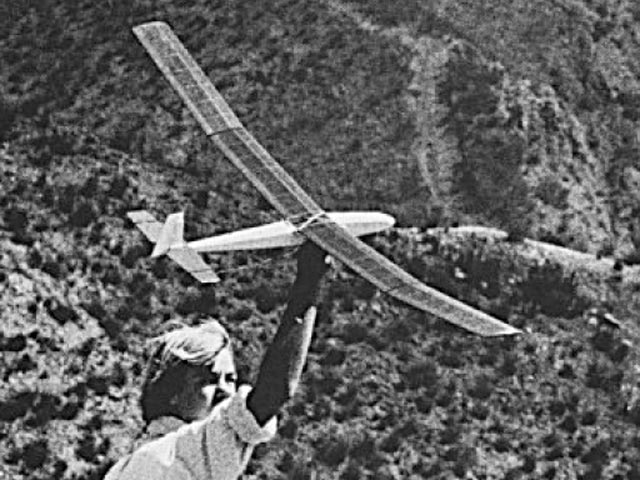