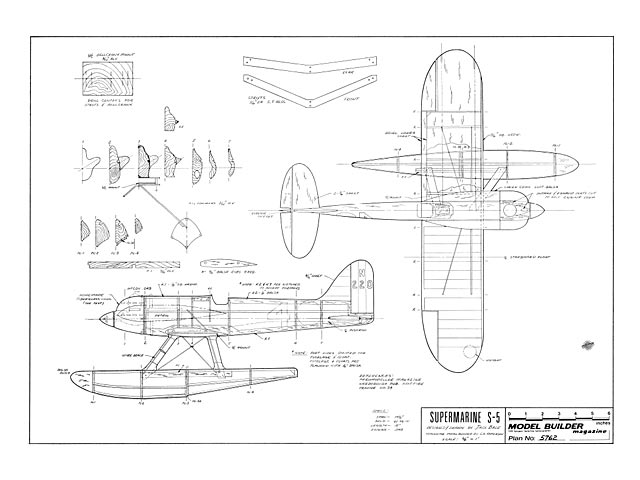 In 1927, RJ Mitchell, chief designer of the Supermarine factory, arrived in Venice, Italy, for the tenth running of the famed Schneider Cup race, bringing with him two of three new racers designated Supermarine S-5. They were numbered 219 and 220. The third machine held in reserve was number 221.

The model subject, number 220, is the second aircraft I've built for the control-line Schneider contest sponsored by the Flightmasters and held yearly at Lake Elsinore, California.

The contest rules state a maximum of .049 engine size and 35 foot steel lines (which are a real necessity for safety at the flying speeds of these little bombs). The models are flown and timed, with points given for speeds recorded plus points for landings, etc. Then comes the static judging (if everything is still in one piece after a few dunks in the drink). This is a very challenging and rewarding event, as even a smooth takeoff and landing leaves flier and spectator equally thrilled.

My first attempt at this type of flying was the year before. I built a Macchi MC72, which was too large (one inch scale), and too slow. Plus an unexpected sit-down in one-and-a-half feet of water didn't help matters any. So later, the smaller, lighter S-5 was begun for the 1975 contest.

Scaled to 3/4 inches=1 foot, this is a small ship but large enough for engine cowling and streamlining. It was judged first in scale points, and was second overall after the flight times were calculated.

CONSTRUCTION: Pin down lower and rear keel parts and epoxy. I use 5-minute type a lot, as it is fast and strong. When dry, remove from plan and install all formers, starting at the rear. Add top keels. Install motor nuts on firewall, blind-type being the best in this case. Cement in gas tank, along with overflow tubing. Add side keels..." 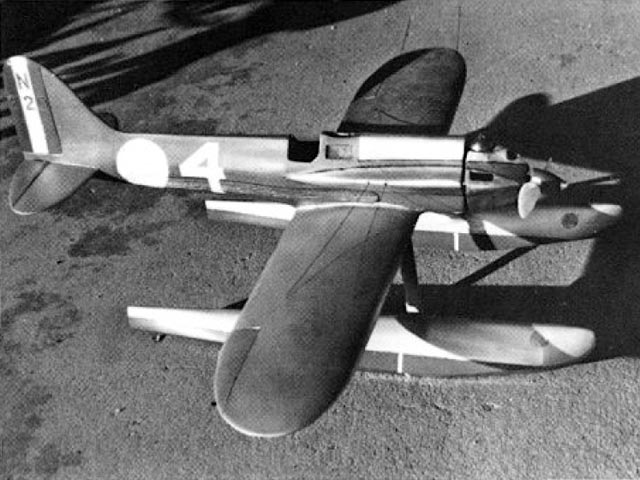 The pontoon strut arrangement would need some more thought, that photo of the underneath aspect is really not one of the prettiest sights.
Miguel - 15/11/2020
Add a comment