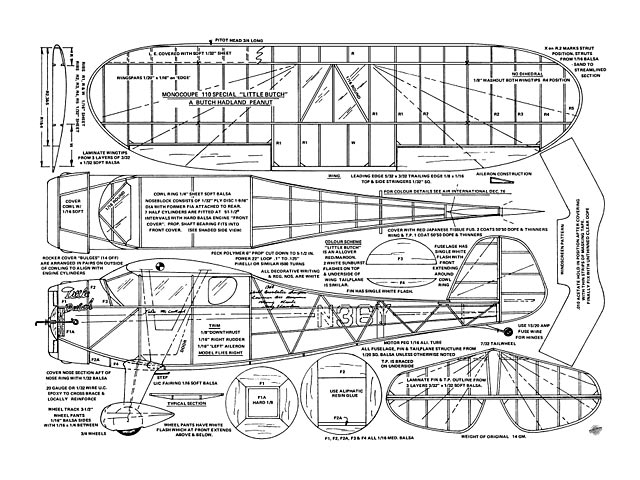 Quote: "Monocoupe 110 Special, by Butch Hadland. This model, by one of England's best modelers, would have been stiff competition at the 1978 PPPP Contest, but was stolen the night before the meet. It's an excellent flier.

Little Butch was born, model-wise, early in '77, when I was thumbing through the Dec '76 issue of Air Enthusiast. There I saw a perfect subject for today's Peanuts, the clipped-wing Monocoupe 110 Special, and the name 'Little Butch' was an added bonus!

Little Butch' is a supremely historic aeroplane, with possibly the most notable feat being the winning of the World Aerobatic Championship in 1948 at Miami, in the capable hands of that famous aviator, 'Woody' Edmondson. Capt John McCulloch, an Eastern Airlines pilot, now owns Little Butch.'' Building the model is straightforward. It was designed originally for British Peanut rules, which give extra points for correct number of ribs, separate ailerons, rudder and elevators, scale construction, and so on. The weight of the model can be reduced drastically if the ailerons are fixed, every other wing rib is omitted, colored tissue is used instead of dope, etc.

The model, as drawn, simulates scale construction as nearly as possible and scores very highly in the static side of Peanut competition. The original flew approximately 40 to 50 secs when trimmed, but other lighter versions have flown well over one minute, so the modeler has to choose the type of model to build to suit his own club's rules.

Now to construction. The basic fuselage box is built by laying up the sides over the shaded areas in the side view, and joining with the spacers shown in the top view. Formers 1, 2, 3 and 4 are now added, as is the 1/4 inch sheet cowl ring. Sheet cover the cowl as indicated and add top, side and bottom stringers. The undercarriage wire (not fairing, add after covering) is now bound with cotton and lightly epoxied to the 1/4 x 1/16 cross brace.

The wing and stab are built conventionally over the plan, but don't forget the washout at the wingtips; this is most important, as the model has no dihedral, and without this washout, the model has no lateral stability.

The model can now be gently sanded all over; this makes the finished covering appear much cleaner. Cover the model with red tissue, remembering that the grain runs along the longest length of the model. Water shrink the tissue and weight down the model. I leave mine weighted down for 3 days; this ensures that warps are minimized.

The fuselage needs two coats of very thin nitrate dope. The wings, stab and fin need one coat. Decide now whether you are using colored dope or tissue to trim, for now is the time to apply it; it's much easier applying decals, trim lines and writing while the model is disassembled. When everything is dry, add the tailwheel, wheel fairings and pants, pitot and footrest.

Assemble the stab and fin to the fuselage with Hot Stuff, ensuring that they are relatively square. Assemble wing to fuselage (incidence angles are automatic) with 4 small drops of 5-minute epoxy (not much damage if you knock the wings off). You can now add the wing struts, bracing wires and an instrument panel (if you want), the upper skylight and the windscreen. I fix my acetate windscreens in place by holding the acetate into position with thin (1/16) strips of low-tack masking tape, then running around the edge with a fine dope brush dipped in nitrate cellulose. This is the cleanest and most successful method I know.

Ensure that the thrust lines are as described on the plan and that the model balances 25% back from the leading edge (with motor installed, of course). Providing that everything is correctly aligned, the model should fly straight from the board; if it doesn’t, be patient - carry out one adjustment at a time and you’ll slowly get it right. (There is a super passage on trimming models in the 'Flying Scale Models of WW-II' book, available from R/C Model Builder.)

For 100% scale modelers, the color of Little Butch is midway between Insignia Red and Maroon, probably equivalent to Stinson Red Q-1913, which was widely used in the USA in the late 1940’s.

There you have it, a really beautiful and distinctive Peanut which flies as well as it looks." 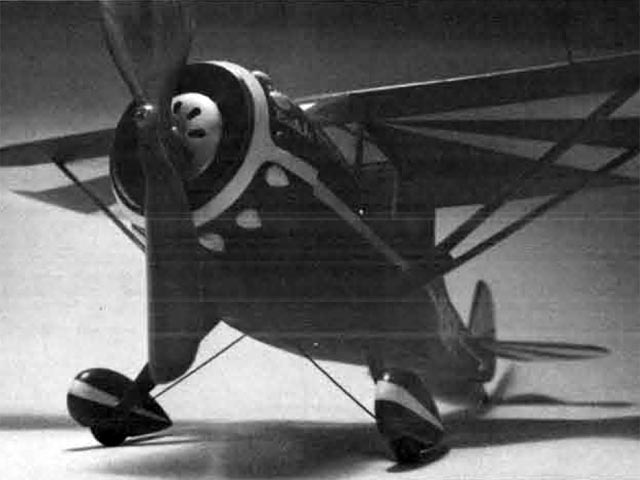